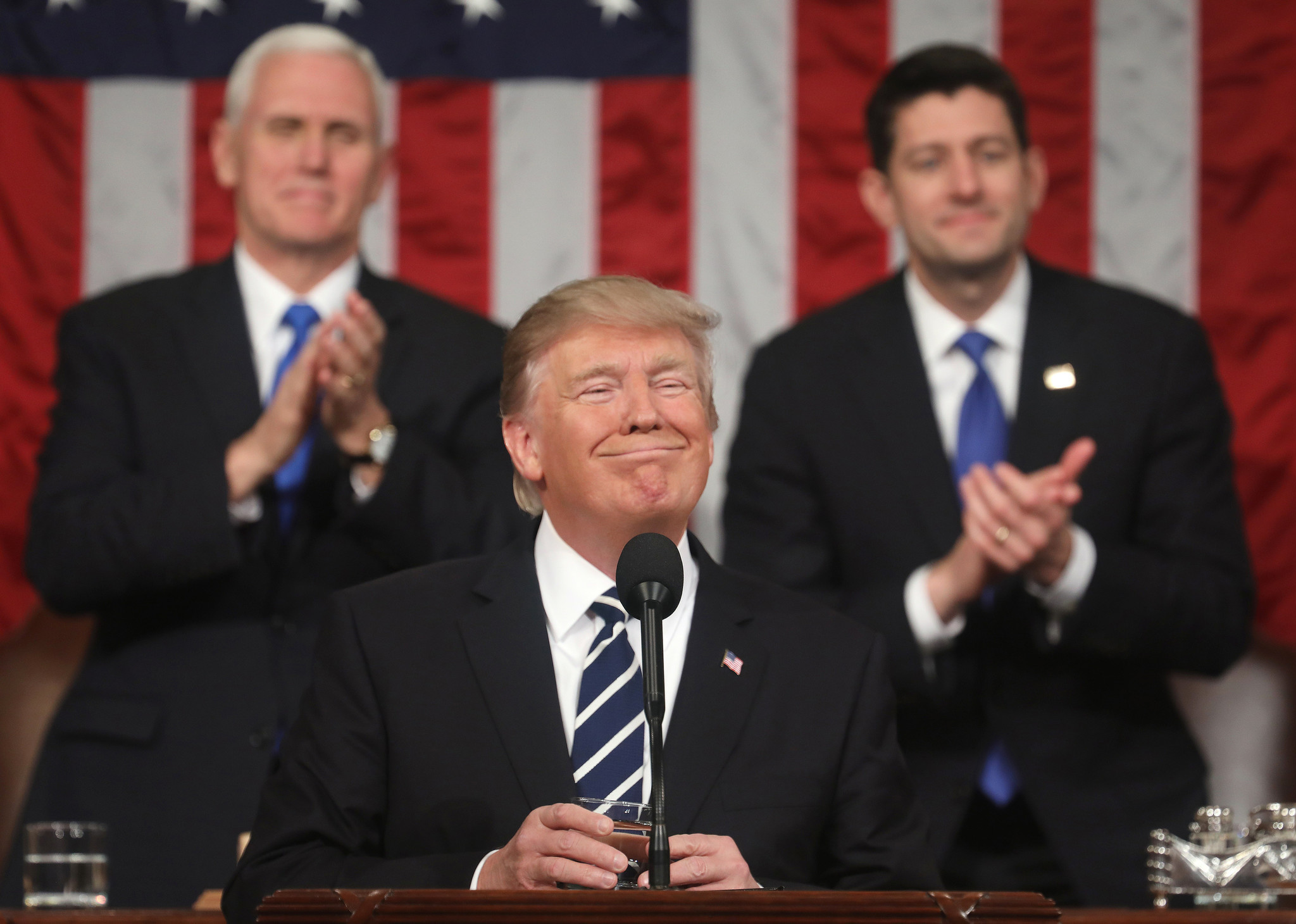 The President Of The United States in dickface mode as those next in command, Fric And Frac behind him dutifully applaud

What an uncomfortable and yet unpleasant sight it still is to see the words President Trump together, as well as the everyday reality of accepting that fact and of the bedlam he is causing in his position. Which made it even worse when the day arrived of his first address to Congress. To see him walk down the aisle in the role given to him by a desperate, disillusioned and disgusted with the status quo and elitism in government, it still looks unnatural and it gives the impression that his election victory and current occupation is just a spin-off from his rotten reality genre NBC program.

But before he addressed congress he acknowledged the First Lady Melania Trump and it may have been the first time that raucous wolf whistling and guttural whoos ever greeted a woman of such a dignitary position.

The contents of his speech he gave mostly was another rerun of all his shallow campaign promises, ludicrous budget spending proposals and pandering jingoistic bromides. More billions for the fucking wall on the Mexican border which is based on speculative profits and theories about returning jobs but for now WE THE PEOPLE are going to pay for. Something called VOICE, which looks like his crack(ed) team aides struggled to come up with a mnemonic for asinine program, which a special victims unit for those subjected to crimes by alleged illegal immigrants. More billions for the Military and Surveillance Industrial Complex. To pay for all this government expansion, which for some reason all the supposed conservatives in the house and senate based their campaigns and tenures rallying and fights against wasteful government spending and overreach, there will be drastic cuts to arts and education, and inevitably on the abolishment of the taxpaying citizens health care apparatus of Medicare, Medicaid and the ACA, along with the de-funding of social security.

These plans, although little detailed and devoid of any substance or sustenance as effective policies, anticipates that international wars are on the horizon. As shown by Figurehead Trump’s bonehead attack on a village and Al Qaeda base in Yemen, resulting in the deaths of not only enemy fighters but civilians including children and the destruction of multi-million dollar fighter chopper and the death of Navy Seal, Chief Petty Officer William Ryan Owens . This was the result of Trump leaving all his war making decisions on Defense Secretary Mad Dog Mattis, whose prior experience supervising quagmires in Iraq should have gave this attack some slight hesitation. But it’s horrible results just made a soldier’s wife a widow and an excuse for the Figurehead to pass the buck and blame the generals (after all, it was their decision). If there is a lesson here, it’s shown that despite Trump’s repeated assertions, not warning about an attack on the enemy like his predecessor did, doesn’t yield success or even intel, no matter how many times he invokes it and how his press secretary over-enthusiastically yells it.

And nothing will be questioned by the sycophantic lobotomized monkey Republican  majorities in the House and Senate for his mystery war plans, especially after the elongated standing ovation, deservedly so, to sad sight of the widow Carryn Owens, praying and weeping to the heavens. Despite the sick, make that SICK, comment of the ovation breaking a record, any mission Figurehead Trump will assign will get partisan majority support in homage to yet another fallen fighter on a misguided and poorly planned attack. Despite the call of a thorough investigation by the Navy Seal’s father William Owens

Which brings this to the crux of this post, the mainstream news media of print, digital and broadcasting.

Prior to the address, former Daily Show and actual Fake News Anchorman, Jon Stewart, made a plea to the fourth estate to be aggressive with their collective reporting on the daily diarrhetoric bullshit, brazen incompetence and policy bedlam results coming from the Trump Administration, in addition to Trump’s libelous, slanderous accusations of their networks, newspapers, and news websites reporting. Jon, still funny and current but very rusty, implored them with a very old and kinda lame popcult reference to “get their groove back”.

Which apparently fell on deaf ears, because the general and collective response after the speech was numb and neutered. For the reason that he spoke his best words about his best plans in a somber tone. Stunningly overlooking all the shit he spewed about the news media in the past month as Figurehead. Stephen Colbert, comeback player of the year, aptly remarked as if the media was impressed that the unhinged president had become hinged. After all the twitter vomit the Figurehead spewed from his stubby vienna sausage fingertips, the news conglomerates resumed normalizing him.

In denial of the omniscient fact that…

Well, since they won’t get their groove back, and they never had any groove in the first place, I like to also offer some proactive motivation. In the hopes of inspiring the insipid throngs that are actually paid to inform the masses. And to use a legend’s recent passing to guilt them into it.

What Would Wayne Barrett Do?

Wayne Barrett was a stalwart, tenacious, muckraking award winning journalist for the Village Voice. And the most persistent chronicler on the wheeling, dealing and stealing tactics of Figurehead Donald J. Trump when he was a real estate scion wonderboy developer in NYC in the late 70’s, 80’s and early 90’s. While Donnie was making a name and local celebrity of himself with his grand ventures in redeveloping hotels, sweeping up prime Manhattan real estate, and starting his idiotic ruinous conquest of casino franchises in Atlantic City, Wayne Barrett was dissecting his deal-making by diligently and thoroughly and uncompromisingly reporting on the corrupt machinations within them. Wayne got under Donald’s skin and broke his brain to the point when the few times they ever met or were acquainted, Donald tried to bribe him with a luxury apartment when he learned he resided in Brownsville and an incident that got him arrested pursuing Trump on his birthday.

The dogged determination and persistence of Wayne Barrett to inform the public about the habitual cheating and sociopathy of Trump, before he became the brand and the leader of the free world and the mess he inherited, may be the inherent reason why the Figurehead has such a vehement imagined distrust and the modus operandi for controlling them and the narrative around his deranged directives.

Wayne Barrett was the under-heralded seer regarding Don Worthless. For he saw and wrote how unmerited his earnings and status were, by ripping off many contractors and exploiting migrant workers. Associating with a nod and a wink with mobsters and gangsters, characters he can easily identify with their similar achievements of dishonest wealth. By frivolous litigation at the expense of city taxpayers to get zoning permits and tax abatements, which he would eventually get with the aid of spineless elected majority democratic officials. He had fucking perditious subhuman traitor to Americans, Roy Cohn for a lawyer. And through his biography of his subject, which was unfortunately renamed to make Trump look like a fucking hero, confirmed and set in stone his documenting of the trust fund baby and predatory developer he was. Which subsequently led to his temporary diminishing of his personal wealth and investor and bank support, forcing him to regain his celebrity and wealth with creative tax evasion and becoming a charlatan on TV by becoming a recurring character on WWE shows and his own culture killing show The Apprentice, parlaying that to his transformation from human to brand, slapping his names on towers around the world without lifting his stubby vienna sausage finger or losing a hair, or in his case without mussing his weave. And still dealing with mobsters and gangsters.

Which as this nation now knows, did not deter him the least.

For if it wasn’t for the news conglomerates obsession with celebrity, no matter how lame, the elevation of Trumpy would probably never happened. If they would have did what Wayne Barrett did and reminded the nation and him personally of all the shit he pulled, the strife he caused, and the lives he ruined and the weakening of government he opportunistically took advantage of, maybe he would not be goddamn fucking president.

Now there are some out there carrying on the spirit of indefatigable intrepid reporting, but like Wayne Barrett, in a limited setting, despite the omniscience of the internet. The Young Turks, The Intercept, Reason, Democracy Now, Propublica  come to mind. But they are not big enough like the whales that are the major networks of CNN, FOX, NBC, CBS, ABC and their cable and local affiliates or the corporate owned establishment papers like the Washington Post and The New York Times. And the only anchorman that approaches the zeal of Ed Murrow, Walter Chronkike, and Bill Moyers, is Keith Olbermann, who is limited in 5 to 10 minute snippets via GQ magazine. So the majors and the celebrity anchors, editors producers and writers, if they truly give a million shits and flying fucks about this country, the environment, it’s laws and the need to inform the masses, who are getting massively pissed off on both sides of the ideological aisles, better start doing their jobs that they are getting paid billions of dollars from advertising and ratings to do.

If anything there is no excuse to avoid the uncomfortable facts to show a celebrity’s appearances, spending habits and palatial dwellings. Because the biggest and dumbest celebrity is signing the orders and directing the laws right fucking now and for the next 3 and 3/4 years.

So all of you professionals in the news industry and even you executives, (especially you Les Moonvees) and especially those attending the White House Correspondents dinner next month…

What Would Wayne Barrett Do?

“There’s No Check on Trump Except Reality”

Bill Moyers Journal: The Donald Trump Story Your Not Reading About

Democracy Now: A Shocking Threat To The World