Video of horrifying attack on #LowerEastSide. If you recognize these guys, call @NYPD7Pct. #abc7ny pic.twitter.com/5tUrfrpiTr

Cops recorded the lowest number of murders and shootings in any January since 1993, NYPD officials said Monday, though rapes were up.

And for only the second time since 1993, there were fewer than 8,000 major crimes reported to police in the month. Overall crime dropped by 2.7% compared to January 2016.

“2017 is picking up where 2016 left off, reducing violence and driving crime down further,” said Police Commissioner James O’Neill.

The year 1993 has been a bellwether because it was one of the worst years in city history for crime. The NYPD’s vaunted CompStat crime fighting strategy started the following year, and crime began to decline.

Mayor De Blasio credited neighborhood policing and additional officers on patrol for the continued decline in many crimes.

“We have now, when you look at New York City as a whole, we now have periods of 24-hour periods where we do not record a shooting incident,” Shea said. “This is the new normal. We wanna build on it and we feel that we will build on it.”

The transit system saw three fewer crimes in January — 209 compared to 212 the year before.

LAST MONTH was the safest February in New York City in over 20 years — although murders for the year have increased slightly, police said Wednesday.

As February came to a close, NYPD detectives were investigating 42 murders, compared to 40 by this time in 2016, representing a 5% bump.

“It always concerns us when there’s an uptick in murders,” Mayor de Blasio said at the monthly crime stats meeting on Wednesday. “We take that seriously, but thank God, overall (it’s) still a low number.” Last month, there were 40 shootings with 44 people shot. That represents a 36% drop from the 62 shootings for February of last year, when 77 people were victimized. The mayor called the decline “extraordinary.”

O’Neill credited neighborhood and precision policing for the positive trend.

“In reality, it’s really a very small percentage of people in this city committing the bulk of violent crime,” he said. “With precision policing, we’re identifying those people — the small groups, gangs and crews — and we’re taking them out.”

These are the most conflicting of times. Judging by these reports from the NYPD, as impressive as they are, well as should give the citizenry great comfort and sense of security, but how come it’s still a tad scary out there. And why of the scarce crime being committed, is the severity of the acts as comparably violent and sadistic as the bad old days of NYC, with the exception of high murder rates.

The other day in the East Village at 2:30 in the afternoon, 2 men pummeled another man to the concrete, repeatedly assaulting him with kicks and punches. In broad daylight as some people stopped and looked and walked away. The perpetrators jumped in a car and fled.

Sure it’s just one incident but this is in a massively gentrified area, and inhabited with modern art galleries, high rise luxury towers and obscenely high rate walk-up apt. rentals and bars and trendy upscale artisanal restaurants and faux dive bars, and barstaurants. Which makes this public beat down so shocking that it actually happened today and not, to quote the city statisticians, 1983, where in the same area it was surrounded by poverty, rampant and blatant drug use and crime, and dilapidated and hallowed out tenement buildings and rubble and garbage strewn lots.

Because the city may have actually reached the tipping point in curbing crime. Or maybe it’s so overpopulated in the metropolitan area now from transients and tourist influx and the new towers are so high they are casting eclipsing shadows, that it’s easy to overlook some things. Especially to people that have to live by or just happened to be there at the moment of the scene of the crime.

And in every report about a recent incident, either by obligation or complicity with the NYPD, the news dailies sometimes puts positive crime stats almost after every report, no matter how big or small the article is.

Take for example the lists provided by the Daily News above. When the January results came out, they not only correlate the month of this year with last, but also from 24 years ago. The strange and unsettling thing is that the lowering is not much of an improvement, just 8 less serious crimes. But juxtaposed with a year from the bad old days, the first year of Giuliani Time by the way, it gives quite a charming and soothing impression that the 5 Boroughs is a shining utopia in comparison.

I have come to this theory when a few grisly crimes happened on the same block a month or so apart on Liberty Avenue, South Richmond Hill, Queens, NY. One maniac stalked his ex-wife where she worked, stabbed her multiple times and tried to behead her with a knife he bought at the 99 cent store, right at the corner of the block. A month later, on the same block around the corner, a man got shot in front of a nite club over a chain. This has more significance, despite how rare these things happen compared to 33 years ago, because it was the city’s first murder of 2017.

Another theory that came to me was the way the mayor and upper brass of the NYPD has described certain incidents and belittled crime trends when asked about them from the press. Especially from a police chief in Greenpoint who redefined what constituted a rape. I have referred to this previously as the Marginal Victims Unit. But that telling and tone deaf response may be policy and protocol, previous to that tone deaf statement, Mayor de Blasio and Commissioner Bratton undermined the level of crime in areas by and inside public parks last year.

A Walk In The Park: Park crime jumps 32% 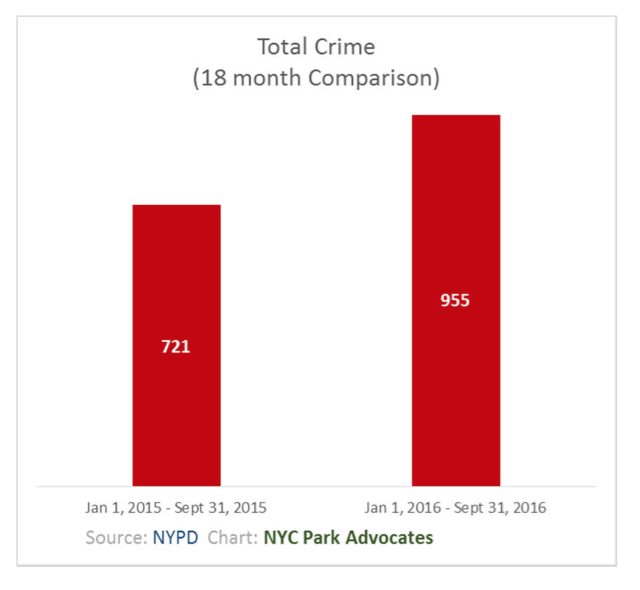 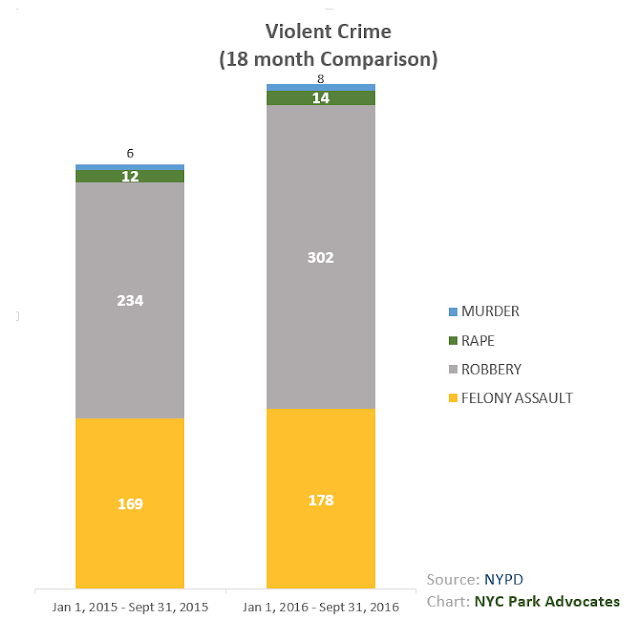 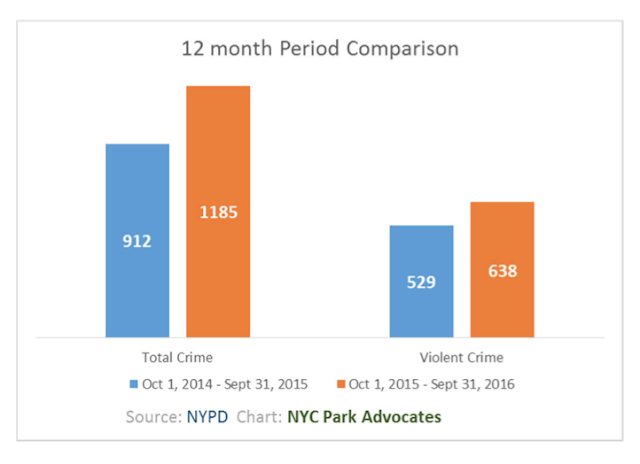 The author neglected, as well as he should, what the crime stats of 1993 in parks were.

Reading the papers, usually the NY Daily News, I started tearing some articles from the papers, putting together a roughshod crime blotter, and couldn’t help but noticed a disturbing trend in contrast to the sunny touting of lower crime stats by city officials and their parts gleeful and exasperatingly relieved expressions. These various crimes were happening frequently in less niche areas of Brooklyn, Southeast Queens which has seen a gradual increase in brazen criminal activity and The Bronx is still experiencing high criminal activity. As well as locales with high rental market rates and areas targeted for gentrification.

All these run the gamut of rampant criminal activity, which can easily be overlooked from the high towers constructed in the past decade from hyper development and the influx of billions of tourists tramping on every crevice and crack of the city like it’s some fucking six flags theme park or universal studio exhibit.

There are crime trends that is seemingly not being addressed. Especially on attacks and robberies on the elderly and rapes attempted and committed on women. The dramatic rise of splinter gangs. There are also a lot of home invasions. And a lot of these crimes are happening in daylight. Also in consideration, is the dramatic rise in child abuse, which has been enabled by criminal incompetence and neglect by the ACS. Two high profile cases, Zymere Perkins and Jaden Jordan, just got upgraded to murder.

What is more disturbing is that the omniscient presence of surveillance cameras is not even deterring these acts of senseless and random violence and robberies. As a lot of these crimes take place in full view of them Take for instance this incident in the Bronx, in similarity to the L.E.S. beat down above, where a food delivery guy was beaten, stripped and robbed in an apartment building by 2 lowlifes, a man and a woman, as a bunch of jackasses hanging in lobby just watch. That couple actually went inside the building after the attack as if they lived there.

It would be easy to dismiss this as hyperbole, but add the scandal that is the homeless census of 60,000 plus, the massive discrepancy of wealth, the horrendously ignored situation of a majority of rent-burdened citizens and these are not the best of times despite how comparably safer it is than it was 24 or even 34 years ago when crack was on the streets. Although it should be mentioned that heroin is back in a big way, similar to the rocks sold back then in that it’s cheaper and diluted.

This is going to get worse if those in city hall, the higher echelons of the NYPD, and all these demented city planners with lysergic visions to turn the boroughs into an interconnected social networking wonderland ever acknowledge the problems of the people that make this city truly run and hold steady in the first place. And cease bringing up the bad old days already, it’s bad enough you people actually put up a photo exhibition for a few hours in the Brooklyn Museum, only to dismantle it when the Blaz’s press gaggle was done and throw it down the memory hole.

This digital publication will make sure of that. Hence the post title. Let’s be careful out there. And be aware of your surroundings. Because our elected oblivious overpaid officials surely won’t.

One thought on “The New Bad Days”