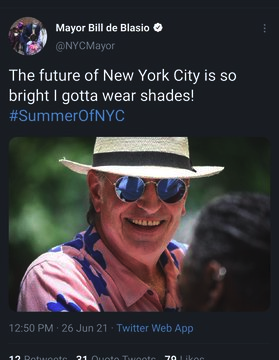 The Summer of New York City during the still happening pandemic is only about a week old and Mayor de Blasio was just exposed strutting around town in a ludicrous, unbecoming and inappropriate get up for a man in his elected position and with numerous crises that are still happening under his purview as the Blaz has in short time transitioned from the Mayor Of NYC to the Staycation Mayor of de Blastopia. The Blaz showed up at a playground in Bushwick dressed like a flamingo neanderthal and that corpse from that weekend 80’s movie, grinning like an idiot and posing for pictures to be dispensed on social media in an obvious attempt to distract the press from reporting from the malaise happening on the streets and in his administration and the persistent threat of COVID-19’s Delta Variant.

Look at this fucking hipster, brought to you exclusively by his faithful patsy flack Bill Neidhart

Apparently Mr. Bill sees nothing wrong with the optics of this knowing full well how loathed his boss is to over half the city’s constituents, what’s even more inappropriate is the Blaz is partaking in games with children and beating them, most recently in a kickball game with his schools chancellor as a teammate (??!!). But more appalling is the way the press is reacting to this on the twitter. Not asking them to say anything bad, but after the way the Blaz has been treating them it be better if they don’t say anything at all (which is how Blaz wishes it could be).

You upper class hack reporters have been utterly blase in your reporting of #TheBlaz. Especially this year with felonious crimes on the rise and homeless people about to get kicked out of hotels with no place to go except dangerous shelters

After giving my eyewitness observation, the long-time veteran news lady did a cut and run tweet and decided to deny my existence. Way to prove my point about accountability and transparency in the news.

Speaking of transparency, The Blaz can’t be any more clearer that he’s trying his goddamndist to distract everyone and avoid confrontation with the realities that he doesn’t want to see much less the ire of his constituents by crashing children’s summer playtime activities and turning them into safe spaces to avoid scrutiny

On a high note, no post about the Blaz can be complete without him naturally fucking up. In his narcissistic zeal to promote himself and his self-serving hashtag summer initiative, he posted a picture of him wearing his shades on the city’s government account and the reflection caught something quite as inappropriate as his dumb ass shirt.

Bill de Blasio tweeting and deleting this is the funniest thing I have ever seen in my entire life pic.twitter.com/30YHKaM5MZ

The more this idiot keeps screwing around the future of NYC is going to have more blight. But he’ll just switch those shades for the rose colored ones he’s been wearing for 7 and a half years.

This post is dedicated to MIke Gravel and you too Michelle Charlesworth.

One thought on “The Staycation Mayor”