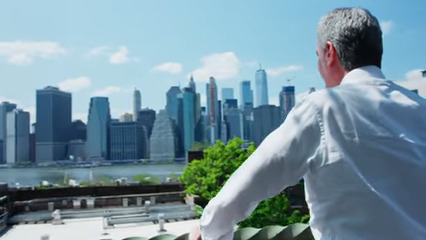 Candidate de Blasio, admiring the city he helped overdevelop and turning his back on his constituents

Well, there and off he goes again, Warren de Blasio-Wilhelm has thrown himself into the presidential race, whose sudden announcement was induced by a high school student who accidentally found an ad for an event Sioux City featuring the derelict mayor touting his candidacy on social media. The ad itself should be a foreboding for the Blaz  for it’s comical misspelling of his current name.

Now he has a legitimate excuse to leave the town he was elected to.

The habitually, perpetually late and derelict mayor is jumping into the primary with 23 other Democrats, despite polling at 0% and absolutely no chance to participate in the first debate in June with the others, including favorites Bernie Sanders and Unkie Joe Biden along with stalwart candidates like the outstanding Tulsi Gabbard and Elizabeth Warren and establishment DNC bots like Pete Buttegieg and Kamala Harris.

Even with these mountainous obstacles and in concert with universal rejection from his constituents and solidarity hatred from people with disparate political ideologies, de Blasio will not be deterred. The defiant hypocrite and ignoramous even blew off the advice of his staffers and his political peers. It’s like if the emperor who wore no clothes realized what he looked like and still arrogantly continued walking in public with his pus oozing herpes sore covered cock and balls flapping in the breeze as he swayed.

His seemly (and suspicious) aspirations to run America confirms that his entire career in office has been more about building his resume than to serve the public that put him there. It’s like he took his useless position as public advocate and transferred it’s uselessness to the mayor’s office. He didn’t even waste time about his intention for higher office when he messaged his desire to go to Ohio, a constant voter battleground state every four years, immediately as he stepped his big feet in city hall.

And when he got in there, he organized a 501 (c) (4) PAC fund Campaign for One New York purportedly to garner donors to advance programs for pre-K and “affordable housing”, which suddenly got terminated when the feds and the Department of Investigation got suspicious about how donors got city services for their “philanthropy”.

As certain nefarious donors got charged and locked up for bribing the mayor, Candidate de Blasio was able to skate with only a weak ass condemnation from the SDNY A.G. and the NY D.A. for breaking the “spirit” of the law. Which was only made possible by the rancid Supreme Court decision McDonnell vs. United States that favored the individual, decriminalizing accepting the illegal bribes by elected officials all over the nation, conveniently including and exonerating the amoral mayor.

Another take to make of this is that de Blaz, feigning to have progressive values, decided to exploit this SCOTUS decision knowing that he would not face punitive charges for his spiritually illicit soliciting of donors that have business with the city. But the ultimate take from this is that Bill can’t govern or lead a city for shit, but he’s an idiot savant adept at raising campaign funds through circumvention of the laws and without regard for ethics or morals. He clearly picked this skill set up when he was working for Hillary Clinton during her Senate campaign and now he is using these particular skills defiantly for his brand new city hall 501 (c) (4) Fairness PAC for this charade national office run, and brazenly soliciting these donors by himself and continuing to reward them city services and not giving a flying fucking shit about it. de Blasio is no different than any recidivist criminal committing the same offenses over and over again. He also is just as much of an addict for mass amounts of donor money as a habitual drug junkie would fiend for smack, crack, angel dust or crystal meth, making him a virtual slave to real estate overlords that really run this city.

What is really hysterical about Candidate Blaz is that he is aping the man who he’s running against. Not only that but he is being quite an ingrate since Trump fired the guy who was investigating him (which is actually the real scandal of his administration). The derelict mayor persistently shows contempt towards the press whether during press conferences (which have become scant) and FOIL requests which are blackened with redactions.

But where the impunity candidate has his perceived orange glazed opponent beat is his heinous coverups of embarrassing incidents he’s involved with. Most recently with a car wreck his NYPD security unit was faulted with when the driver was ordered to make it to an event in Harlem and wound up crashing into a truck while driving on the wrong side of the street and the Blaz walked away from the “accident” with police escorting him.  This incident happened 4 YEARS AGO and the reason for that is the commander of the derelict mayor’s unit had the accident erased from city records. (It’s disturbing to assume what other records is the NYPD erasing or manipulating, like say crime statistics). Hell, even when the derelict mayor dropped a groundhog and she wound up dying from the injuries he caused also got covered up the Parks Dept.

Is it any wonder why this stupid fucking idiot is running for president, or more likely running from the town and the mess he’s made of it. Now he’s suddenly for the “working people” after 6 years of “working” people for big money donations and a career of “working” people to trust him with their votes expecting change and getting hoodwinked.

Candidate de Blasio is an habitual liar and political hedonist, and if you need evidence of that just check out the header photo above with Mayor re Dacted admiring the overdeveloped skyline in his lousy campaign video. Trying to present to America how successful his leadership has been showing off all those towers that were made possible with his pay to play corruption as it obscures the dystopia and depression of the public housing that he let deteriorate and as the homeless population continues it’s ascension made from the gentrification of towns resulting from and exacerbated because of his fauxgressive and politically favored driven policies and his perpetual distractions, disinterest and now evident ennui in running the city and being an advocate to his constituents.

This is why this dummy is running for president despite the solidarity revulsion and hatred for him. All that criticism is music to his sweet potato filled ears. This is just a typical progression for him. He’s as amoral and lucky as Breaking Bad’s Walter White, being that some freak of nature or in his case idiotic laws enabling graft and corruption that he always winds up unscathed even when he’s being reckless.

But it’s probably not going to last seeing that he has a campaign staff of five and he has to go on Zuckerbregs website to beg for a dollar like a bum to get on the debate. Even though the Democrat donkey race is pretty crowded, it’s perhaps fitting that de Blasio has to be the lone jackass in it. He’ll get bored of this too. Especially when he can’t get his donor money fix.

I took the liberty on the Twitter in order to ultimately prove candidate de Blasio’s unpopularity and repulsiveness once and for all, by putting up a poll having him run against the guy who broke all those LinkNYC kiosks screens with a brick and it’s hilariously unanimous: 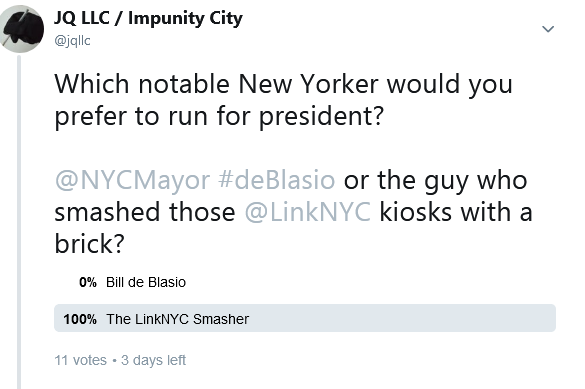 If the Blaz loses it’s not going to get through his thick skull anyway but it’ll be funny to see how he fails again, especially against a violent mentally unstable person.

One thought on “Impunity Candidate”