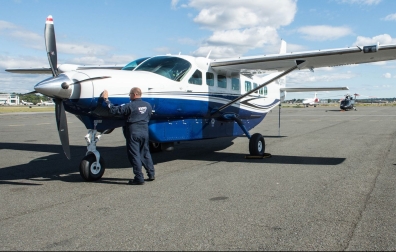 It looks like Mayor Airdope is at it again. At the start of his combination vacation week and fugitive-like avoidance to ditch the city because of the results from the U.S. Attorney General and the Department of Investigation’s assessments of the severity of lead contamination of NYCHA apartments after over 5 years of wanton neglect and fabricated inspections and the effects it had of over 820 children that the city heinously covered up by having it’s Health Dept. raise the contaminant standard at twice it’s level, Mayor de Blasio must have forgotten that a memorial for murdered cop, Detective Miostosis Familia was taking place in the Bronx. So he and the NYPD, under orders of Commissioner O’Neill, had to shuttle him on a Cessna counter-terror surveillance airplane from Montreal at the start of his vacation, for the somber ceremony and street renaming of a career public servant.

Now that Mayor Airdope’s Scott Pruitt inspired use of taxpayer dollars for compulsive extravagant and selfish needs, which makes sense in light of his persistent refusal to acknowledge to continuing malaise of shitty subway service and daily traffic congestion that he avoids like the plague and which falls in line with his past profligate spending to pay off his attorneys for his aborted trial hearings on slush fund PAC fund raising in city hall. And also because he’s a flaming hypocrite asshole that decries the human influence of climate change by spending the entire morning every day of his mayoralty going to a gym in Brooklyn pretending to work out commuting with a motorcade of vehicles. But what should get the proper scrutiny is why the NYPD needs this plane in the first place.

The plane, which costs 3 million dollars on a grant from the Department of Homeland Security, is supposed to be used to detect dirty bombs and nuclear material. Even though the NYPD already has a few choppers that has this detection technology and a patrol unit, which shows how redundant this plane is. And considering that every threat publicized by the NYPD for deploying thousands of cops to certain areas of interest for attack are never confirmed, it’s a wonder if this particular plane has ever been used at all for it’s stated purpose besides for it’s convenience and unrepresented taxation spending.

The real shitty thing about this, well two shitty things,  a portion of that 3 million that was spent on this stupid redundancy could have went to bulletproof that command post’s windows that would have protected Detective Familia from certain death by that lunatic shooter (the sick thing about this preventable killing is when this plane was bought, all that is reported is that it was bought in 2017). And that with this blatant excessive use of this plane as an Uber hail by de Blasio, it will probably lead to homeland defense funds getting reallocated because of the risk the lazy pompous mayor put the city in by taking away a counter terror defense plane and send the funding somewhere else where it will certainly be wasted by another dumbass arrogant official.

Which in actuality, might not happen as Commissioner O’Neill pointed out that the DHS has not sent him any word or even a stern condemnation about this moronic waste of tax payer funds. It shows that when it comes to the NYPD as well as police and sheriff departments across the nation, that this profligate bullshit that Mayor Big Slow committed is permitted on occasion and a drop in a bucket to fortify local cops with sophisticated spy apparatuses and military grade machinery. As recent events in Sunset Park to detain a group of men in a nightclub and in Bed-Stuy to track down a fugitive running a cop he shot at has shown.

Besides, there are thousands of things to shame this shameless bag of dicks and shit Mayor about than his crass round trip plane ride to make an on the spot appearance at a street dedication to a woman shot down on duty, for this is what is expected of him. Mostly they are the homeless crisis and the wanton criminal neglect of public housing, which he has both exacerbated and his beggary and deference to his donors that got him the job in his near 5 years of service to your city. This was just the obvious, the other pertinent issues will be covered here in a couple future posts.

Be seeing you, Mr. Mayor. 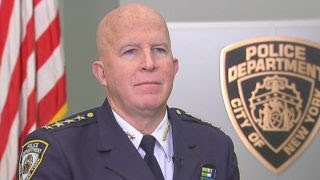 Let him have it

It has turned out that three days after Mayor de Blasio’s wasteful roundtrip jaunt, Commissioner James O’Neill and some of his fellow entitled top brass colleagues also took the plane to a funeral of a state trooper upstate and also misused the plane of it’s purported purpose to attend a funeral of the mother of a high brass ranking officer named Robert Boyce in Allentown, Pa in June 6 2017. Which is sort of like the Commish treating a high tech spy plane like a limited transport shuttle like Joe Hackett from Wings.

This exploitation of federal tax dollars to ensure the safety and security of New York City’s shores from dirty bomb smugglers occurred barely a month before the murder of Det. Familia as she sat in a NYPD command post that did not have bullet proof windows that would have saved her life.

If this isn’t enough of an exhibition of crass arrogance, the Commish defended getting caught exploiting the plane like he owned it by proclaiming that he is too busy. That’s it. No further explanation. No accountability. He’s a busy fucking top rank official so fuck all of you taxpayers and any cop that points out his blatant hypocrisy of using the badge and rank to get perks.