To protect the shores of the beachfront to defend against future hurricanes certain to come and threatening rising sea levels, the State of New York and the Federal government has granted the coast lines of Fort Wadsworth to Oakwood Beach with a  buried seawall and levee to be constructed, with a boardwalk for pedestrian and possibly bicycle usage on top. The project will start construction in 2018 and set to be completed in 3 years (better hurry up.)

Although it’s supposed to function as a security apparatus, our visionary artiste and event planner governor deems it unsatisfactory and not ostentatious. Oh, no, for it to be truly worth the costs it has to have the usual superfluous additions and attract travelers yearning for new destinations. 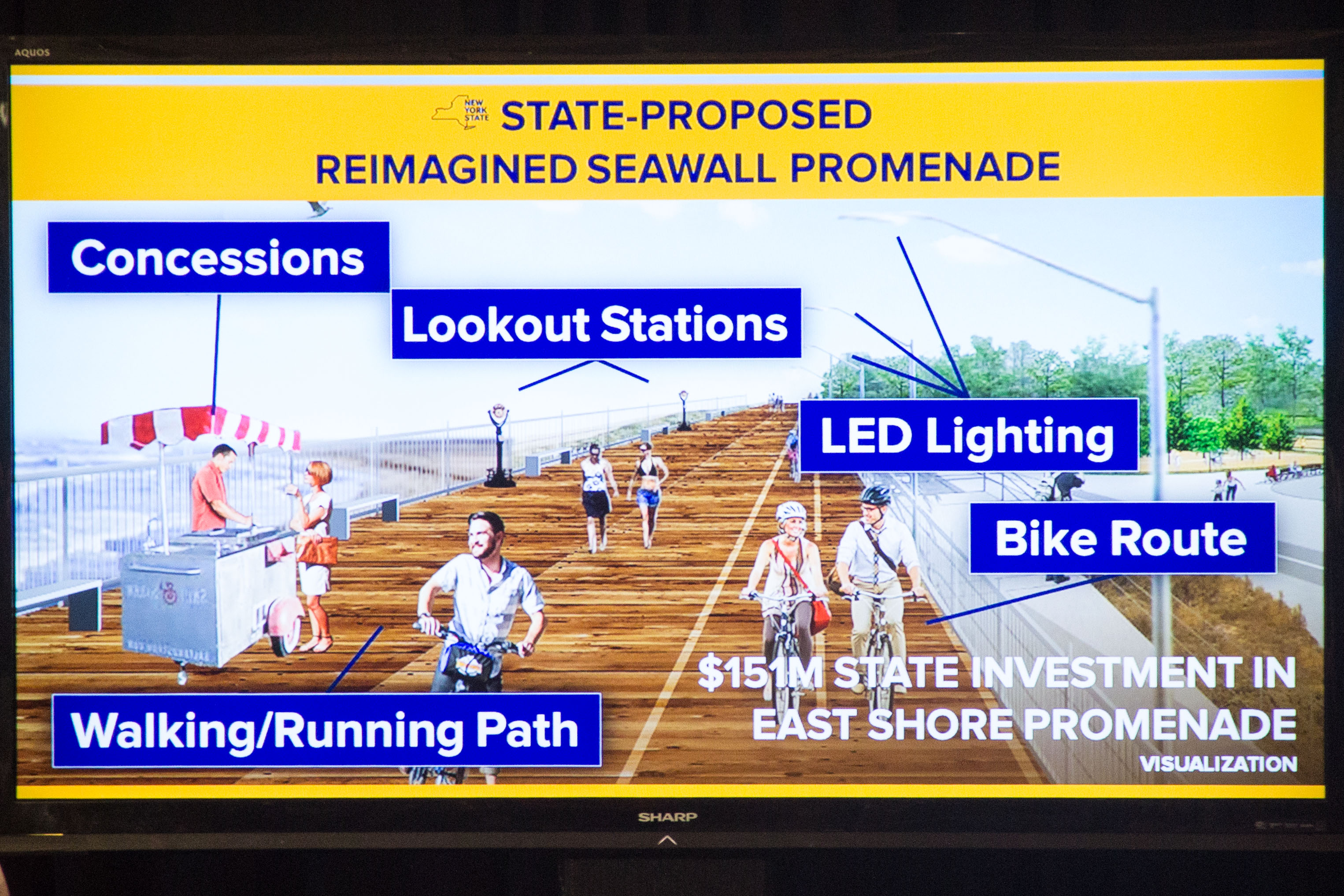 Why don’t we really think about this as an attraction rather than just as a functional device,” said Cuomo. “Let’s build something that enhances the island and enhances all the homes that are looking at the promenade.”

“We don’t want just a walkway for seven miles that frankly is going to be a wasted opportunity,” said Cuomo.

You see, it can’t be just a regular boardwalk. So in spite of the drab and dull plans of the Army Core Of Engineers, Andy wants to widen the boardwalk beyond the original plan so it could hold events, marathons and those overpriced food concession stands this generation raves about and takes photos of. And stands to sell those rancid craft brews Mario’s son loves so much.

When the Advance asked Cuomo, who gave few details in his presentation at The Vanderbilt, how his proposal would differ from what the plan already includes, he said, “We don’t think it’s enough, I think it’s too narrow. We’re talking about a 30 or 40 foot promenade, we’re talking about amenities along the promenade. A promenade is a tourism destination, it has amenities, there are food kiosks, there are benches, there are lookouts. There’s all sorts of ideas that you can do.”

The cost of the project, expected to be completed in late 2022 — originally 2021 — has steadily increased from an estimated $579 million to the most recent $615 million estimate, making the federal government’s share about $400 million; the state’s share about $154 million; and the city’s share about $62 million.

Of course such inspired lunacy leads to sacrifices, like the amount of state taxes extracted from your paycheck. And because of Andy’s proclivity for wasting money that’s not his own, the project already is behind schedule. Which totally goes against protecting the homes and citizenry from the next Sandy like devastation.

“This isn’t just a wall,” Cuomo said. “We should think of it more as a promenade with a boardwalk and concessions. Let’s build something that enhances the island. Let’s increase real estate values and improve quality of life.”

It shows once again that people elected to wield great power and responsibility still are too dumb and easily forget past history when they are overwhelmed with blind ambition and even unsatiated greed. The latter that can cynically refer more to the interests of REBNY than the homeowners on the borough, who will certainly lose everything if a massive category 3 storm comes in a year’s or maybe a month’s time.

Most importantly, Andy exposes himself for the brazen ignorant hypocrite he is by putting superficiality and frivolity first with his irresponsible grand redesign of the seawall in spite of his grandstanding of his belief in the extreme effects of climate change after chastising Figurehead Trump for pulling out of the Paris Accord.

No wonder this jerk thinks he can be president.