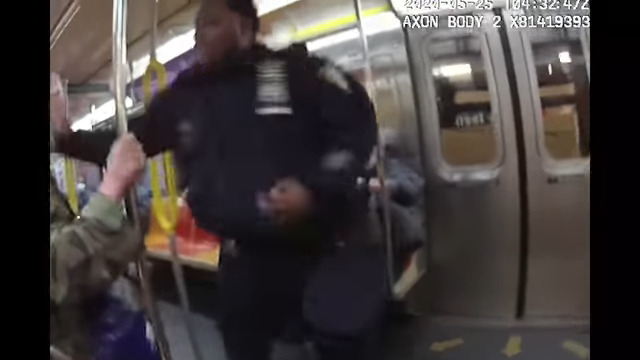 One evening in the subway in Manhattan, a fascistic attack against civil rights by the NYPD occurred and the city and state of New York tried to cover it up.

According to an article in the digital publication THE CITY, a homeless man carrying all his possessions in tote bags was heading to Brooklyn on the 6 train going downtown. Suddenly, two cops walked into the car he was in and ordered him to get out because his bags were placed on the empty seats next to him. When the 6 pulls into the 51st Station, the homeless man complies and gets out but decides to run to the next car before the train departs.

The cops keep the train at the station and then order the homeless man to get out again, threatening to physically kick him out. When the cop tries to grab the homeless man, he refuses to budge and then the cop punches him about 4 times then he and his partner grabs him and ejects him from the train and kicks his only possessions on the platform. They keep the homeless man detained on the floor while placed in plasticuffs until the EMT’s arrive and strap the man to the gurney and roll him out. The homeless man wound up getting arraigned for felony assault during the arrest by D.A. Cy Vance, which carries a sentence for up to 7 years.

If it wasn’t for the video, this would have just went through the system and no one would have ever known about it, not even the news media. But the severity of this attack on this homeless man carries great significance and should give the general public pause on what the authorities are trying to normalize in the New Normal we all live in under the still existing pandemic and also what they are willing to do to maintain it.

The catalyst of this incident stems from Governor Cuomo’s decision on May 6 to shut the subway down at 1 a.m. so the trains could be thoroughly cleaned to prevent COVID-19 contagion from spreading after over 130 transit workers perished from the disease and multiple videos of trash strewn train cars occupied by homeless people went viral. Which meant that no one was allowed to commute in the subway until 5 a.m. On the day it was in effect, MTA and NYPD cops were deployed to kick all the homeless people out of the trains and the stations, leaving them all to take whatever shelter was offered or to wander the streets for a place to sleep.

When this altercation and escalation by the cops happened, the transit shutdown was already in effect for 19 days, and it appears on the video that the cops targeted the homeless man based on the MTA curfew and he was already violating the hardly enforced law of placing his bags on the seats which gave them justification for ejecting him.

But this is where those cops case turns to shit. Because when they started hassling the homeless man, it was only 12:30 a.m, a half hour before the subway closes so he must have boarded that train even earlier than that from wherever he came from. And the cops decision to order him off the 6 based on his bags on the seats was purely arbitrary and he appeared to be the only commuter on that car so he wasn’t really causing an obstruction.

As for the homeless man resisting to get off, he actually does have a lot of justification on his side. Because he was only taking the train to Brooklyn because he refused to stay at a shelter he was assigned to because it was too crowded and felt safer finding a desolate place out of the way to sleep for the night than to risk contracting coronavirus. To give an idea what that must have resembled, here is a picture of a homeless shelter by Bellevue Hospital where cops and city workers were sending when they kicked the homeless off the subway on the first day of the lockdown:

But the cops persisted anyway, they have orders to follow even though the homeless man was not breaking any law or even any pandemic guidelines. When he went to the other car he was still socially distanced from the other passengers and was wearing a face mask too, but only took it off to communicate and tried to plead with the determined cop, who actually was a bigger contagion threat because he didn’t have a mask on.

But besides coronavirus, the other existential threat is the dismantling of civil and human rights, which that cop displayed when he dehumanized that homeless man and his possessions like they both were garbage and exploited Cuomo’s and NYC Transit’s pandemic protocols to administer selective and capital enforcement on the most vulnerable people in society.

It’s taboo to make comparisons to historic events, but not only did this vulgar arbitrary brutality happen on May 25th, the day George Floyd was tortured and murdered on the street of Minneapolis during an arrest, this incident is really similar to Rosa Parks correctly refusing to move to the back of the bus because of some racist arbitrary law. It’s not wholly racially motivated because the roles of the races involved here are reversed, but it’s more like a caste system motivated civil rights violation. And trying to criminalize homelessness and poverty.

The homeless man was right to disobey. He did nothing wrong, he just wanted to go somewhere else besides a superspreader shelter where he could easily get infected. (Think about if he did remain at that shelter and then got on the subway after 5 a.m. )In a way, this is what the recently departed John Lewis said about making “good trouble”, which is why the guy took a risk wresting his hand away from being grabbed by the cop and being walloped, peppersprayed and having 200 pounds of NYPD on his back for 15 minutes or longer. Even Rep. Lewis had his skull bashed in for crossing a bridge for civil rights and social justice.

Watching this video and the subsequent effort to lock this guy away for years for just wanting to go home and for an assault charge based on a skinny man swatting away a fat cop’s arm and kicking the cop who beat him on his hand during the arrest (not known if it was accidental or intentional) reeks of utter crony corruption and an attempt to normalize a mild form of capital punishment, even if they were eventually dismissed. But after this incident and video, something about Governor Cuomo’s edict to lock down the subway doesn’t look like a conscientious task to remove every pathogen they can scour from the trains and stations but now looks like they want to ban the homeless from riding the trains outright. Who knows if the demented plan to make the subway accessible through reservations is still being considered in those MTA board meetings. Maybe primping NYC Transit for the upper class is not so farfetched considering that Cuomo is recently begging again for Fed dollars from DC with warnings of a fare raise for his constituents. Could a $5.00 fare be near?

Sure there were all those weeks of selfish and mentally ill derelicts (there is a distinction) that were inhabiting and making the trains ghastly unsafe with shopping carts and piles of litter strewn all over the floor including bodily fluids and feces when the trains were running slow and bereft of commuters during the high body count month in April, but they are not relevant to what happened on May 25th at 51st/Lexington. Those cops brutalized him, kicked him out and violated his rights to commute and fourth amendment right when they searched through his bags later on because he was homeless and they were given orders by the state to do that. That’s it.

As for the cop who beat the shit out of that homeless man, he got off without charges and consequences, aided by the belated wishy washy response by Mayor de Blasio who took a week to see the video and 2 months to be cognizant of the incident, which is no surprise after excuses weeks of excessive force utilized by the NYPD during the Black Lives Matter protests which are still continuing.

But there was and still is not much recognition for the homeless man, Joseph T. who works as a hairdresser by trade. Even though his ordeal should be a new warning about the ominous omniscient threat of becoming homeless during a new depression and a burgeoning police state that’s gradually being implemented that will enforce arbitrary but fundamentally baseless and unconstitutional laws against them.

Thanks to Cathy for that last sentence.