Week 2 of the 2018 NFL season for the N.Y. Giants has exposed them and it’s franchise quarterback Eli Manning as being a pathetic, ineffective weak ass team. Despite the hiring of a new general manager, head coach and offensive and defensive coordinators, a stellar draft pick for running back, and a massive 95 million dollar contract for a douchebag though phenomenal wide receiver along with another great young receiver and tight end from the last two drafts shoring up a potentially high octane offense. Somehow, although saddled with a porous offensive line that is deservedly and hysterically mocked, Eli is unable to move the chains and get to the end zone with all these weapons that were given to him. As the Giants look like they are going to repeat the low scoring futility, averaging less than 20 points a game, that made them the worst team in their history in 2017. (It should be noted that Eli’s ineffectiveness was apparent even in their last playoff season the year before as they couldn’t even score 20 in their last 4 weeks and relied on their defense to bail them out.)

It’s more than obvious now that Eli is past his prime and has to be benched again. But since the Giants gave up their backup quarterback Davis Webb after letting him play not even one snap and only for few quarters in a preseason game, they don’t have much talent waiting there on the bench with another quarterback they drafted and some career bench warmer. Considering that the Giants pick of Saquon Barkley (which was a good move, every team needs a superstar, multifaceted running back to get a ring, examples Emmitt Smith and Marshall Faulk) was motivated to get to and win the Super Bowl this year, they aren’t going to get far with Manning’s pathetic performance.

The Dallas Cowboys trouncing of the Giants on Sunday night showed Manning throwing short most of the time and frequently missing targets downfield, more specifically not seeing them. Eli’s instincts has clearly fell off. One noteworthy play early in the game had him faking to Barkley and setting up to throw and then immediately threw it back to Barkley on the sidelines at the line of scrimmage for no gain. Eli also is afraid to run. Not counting the two quarterback sneaks for first down (showing the O-line is actually not as lousy as they are being portrayed, they just mildly suck), which Al Michaels scoffingly pointed out was the first time Eli had done that in 8 years, he barely moves in the pocket, sometimes not at all,  and makes bad rushed judgements leading to easy sacks and interceptions.

At 0-2, the Giants are looking at another lost season, but it can be stemmed if the owners and Gettleman act quick and make a drastic and in this case, revolutionary move. And that is to sign Colin Kaepernick.

Why. Because Eli is going to get worse, the thought that he will win another Super Bowl has been a crackpipe dream for a very long long time. He’s lost it, most apparently his instincts to find open receivers. And even though it’s still summer in the NFL, it’s rigoddamdiculous that he spends 57 minutes of the game barely producing and only gets the offense going in the last two fifteen. And there is also the potential for injury which Eli has admirably avoided throughout his career but now his stability has become a liability as he clearly plays the game like he’s trying to save his own ass. And the backups are questionable to say the least (who thinks draft pick Kyle Auletta is going to be Tom Brady?).

In contrast, Colin Kaepernick, who also has never got hurt, would massively thrive with this offensive unit. And not only that he runs. He runs a lot, he has amassed over 3,500 yards rushing in his short and disrupted career, averaging over 5 yards a carry, so even with the Giants weak offensive line, he can still easily evade blitzes and the pass-rush of the best defenses in the NFL. Because of this skill set, he can assuage the mental and physical health of his (possible future) teammates and make them perform better.

And Kap’s agility will also benefit the superstar players, Barkley and Beckham Jr., whose personal stats will explode with him in the backfield calling the plays and bring out the massive potential in WR Sterling Shepard and TE Evan Engram. Opposing defenses will be so nervous and overzealous, penalties will happen with regularity giving the Giants gift yardage in false starts, holds and pass interference.

Kap is pure catalyst, motivator and a true leader, as his Super Bowl performance showed when he brought his team, the 49ers, back from certain defeat in the second half but came up short against the Ravens. His acquisition will result in an offensive triumverate since the Dallas Cowboys dynasty in the 90’s when they had Troy Aikman, Emmitt Smith and Michael Irvin leading them to three Super Bowls.

How? That’s the dicey part, because Kaepernick is in court suing the entire NFL for collusion against his right to play and his right to protest for social justice and against excessive abusive force and endemic corruption by police and the biased justice system that enables it. If the Giants give him a contract, they could exempt themselves from this lawsuit (I think).

The Giants, while turning their team into an unstoppable juggernaut, could also see their viewership and ticket sales go up with signing Kap. Now that his Nike endorsement deal has seen their overpriced wage-starved worker made gear spike up, the NFL and the networks would also see a big jump in their ratings too, for people are going to tune in to see if he kneels again and will be curious to see how he plays. Viewership will certainly go up locally for New York and New Jersey if Kap picks up where he left off and plays great, resulting in wins.

As for the National Anthem, if the Giants win with Kap, nobody is going to give a shit. Besides, the new NFL regulations state that you can wait in the locker room, like they used to until the Pentagon started using our tax dollars to exploit the anthem for advertising and recruitment in 2009. Oh, and other players are still kneeling anyway and without repercussion. And our president, Figurehead Trump, after all his distracting carping and dictatorial demands for standing for the anthem is as of now, tremendously irrelevant now that everyone knows that he is not actually running the country and his aides are doing all the policy work for him, according to the deep state manifesto in the NY Times last week.

Giant fans have been frustrated way too long, despite Eli winning two Super Bowls. Kap getting them back in it will make people forget about his silent protests real quick. But like the free market now knows thanks to Nike’s new ad campaign, the majority of people do want equal justice and an end to police abuse and brutality and want widespread change to take place in political office. The Giants really can’t go wrong with signing Kap to a deal and the NFL and the team owners would really save and earn a lot of money if they just admit to collusion, agree to a settlement and lift the ban.

The Giants can’t go on with Eli motionless and constantly backing up and dumping the ball avoiding encroaching defenders. And if there is an ideal comparison on why Kaepernick needs to be under center is that the last time a professional athlete was this outwardly political was Muhammad Ali and after he got suspended, he came back to boxing and won 2 more championship belts. With all this offensive talent the Giants drafted in the past 5 years, it’s just going to waste with Eli Manning’s futility and apparent declining skills.

Kaepernick is not only better than Eli athletically but also as a person. He has donated millions of dollars and locally here has contributed over 30 grand to a non-profit that provides suits for unemployed people in Jamaica, Queens. While Eli’s off-the-field contributions was only to himself as he tried to pull off a scam selling bogus memorabilia from his playoff and Super Bowl victories. So Kap is way better for the Giants team image wise.

As the Giants face another killer defense, with two rampaging mastodons J.J. Watt and Javeadon Clowney  when they face (and get shut down by) the Texans on Sunday, there is no more time to waste. Gettleman and the Mara’s have to reach out and fix this pronto. Sign Kap to a temp deal. The transition can be smooth, sign Kap and let him warm the bench for a while and let him get the rust off during practice during the first half of the season and keep Eli starting. If the Giants are 2-6 when week 9 comes around and the division is still tight (and it probably will, the NFC east is looking pretty least especially after the Super Bowl champs loss to Tampa), then tell Pat to give Eli the long overdue benching and get Kap on the field and watch the offense explode. It’ll be so natural and right.

Because Eli is not going to win another Super Bowl, no matter how much you wish for it. For the good of the franchise. Put Colin Kaepernick in Giant blue. Don’t turn this season into the wretched turd like last year and make this right.

To loosely quote that sport gear corporation, just fucking do it. So the Giants can start fucking winning. Enough of the excuses, the lame hindsight, underachieving and the shit playing. Sign Kaepernick and the revolution will be live every Sunday. 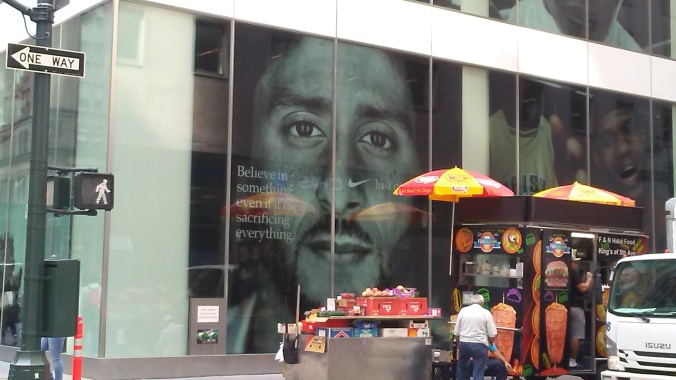