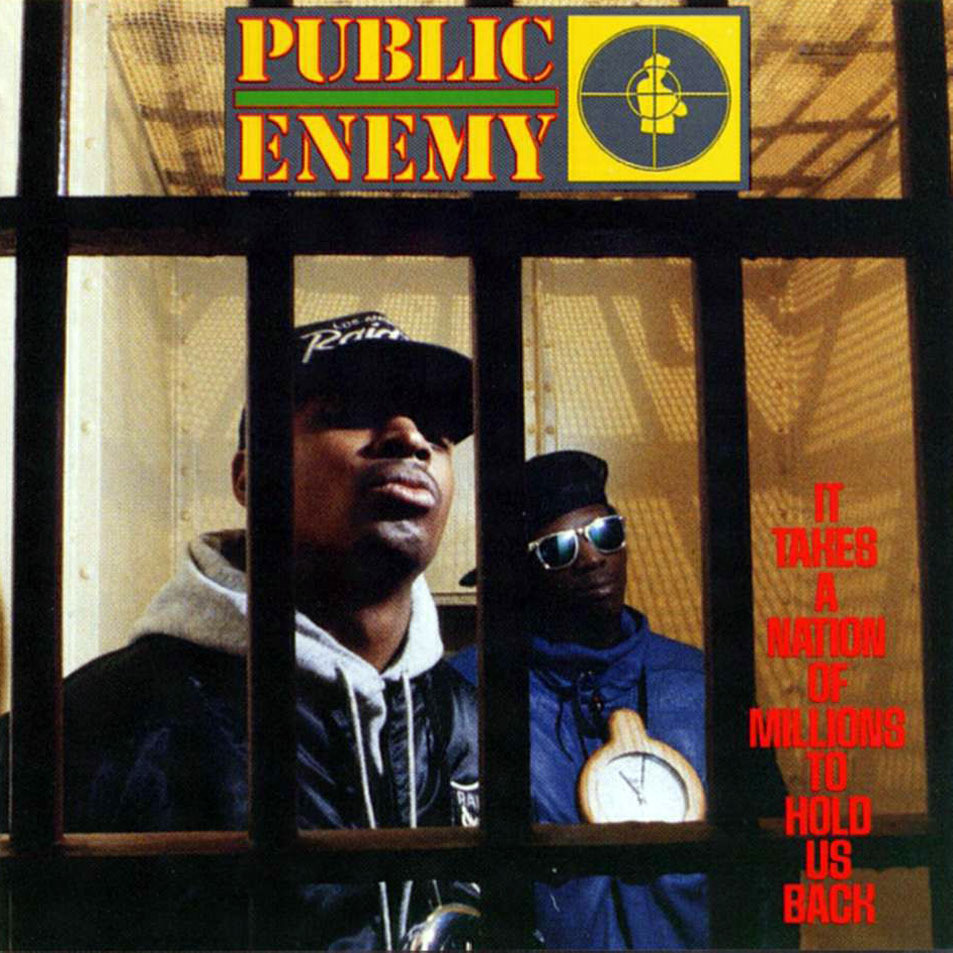 30 years ago, Public Enemy and Def Jam released this landmark hip hop album. Without a doubt the greatest rap album ever created.

This was the Sgt. Peppers of Hip Hop albums, and it’s significance, it’s also Marvin Gaye’s “What’s Goin’ On”, which was the main goal of the band for it’s inspiration. But sonically, stylistically and aesthetically, it’s also  Sly Stone’s “There’s A Riot Goin’ On”, Jimi Hendrix’s “Are You Experienced”, The Clash’s “London Calling” as well as their first album, Prince’s Purple Rain and even Pink Floyd’s “The Wall” since it resembles and flows like a concept album. And like those albums it stands alone.

Although it was preceded by Run-D.M.C.’s hat trick of classic albums and also LL Cool J’s The Beastie Boys, Eric B. and Rakim and Boogie Down Productions excellent and raw debuts, this was the album that officially progressed the rap genre into the album format and started what is now deservedly called the Golden Age Of Rap. The album has absolutely no filler, even the instrumental breaks on the album are excellent and serve as suspense for the next tracks. Two of them, “Security Of The First World” and “Show Em Whatcha Got” actually became the basis of classic songs themselves by Madonna and Jay-Z

This album solidified Public Enemy as one of the most unique and greatest bands of all time of any genre. Chuck D’s condensed and unabashed political lyrics and innovative rapping style, Flavor Flav’s hysterical interjecting and standout personality, Terminator X’s virtuoso scratching (maybe the best of all time) and the Bomb Squad’s wall of chaotic sound and intricate sampling, mostly of white noise high pitched screeching horns, came to the forefront of this musical manifesto.

Then there is the album. Chuck D managed to combine the usual braggadocio with soapbox ranting of the ills of society being meted from government policies to the effects on the streets nationally and internationally and pervasive racism and classism that still goes on to this day.

“Don’t Believe The Hype” targeted the commercial news media, which had already compromised itself with it’s coverage (or lack) of Vietnam and it’s protests, by going after their business model of sensationalism. This song was also a prophecy of the news media’s reliance on “The Culture Of Fear” and “Fake News”.

“Black Steel In The Hour Of Chaos”, with it’s ominous Isaac Hayes piano riff, is a fantasy song inspired by Muhammed Ali’s conscientious objection of the Vietnam War, of breaking out of prison after being sentenced for refusing to serve an unjust war. “Night Of The Living Baseheads” covers the urban poverty zombie apocalypse from the crack epidemic at the time,(which is now updated with the rise of K-2 in the past 2 years).

“Cold Lampin With Flavor” is a wild freestyle solo cut by Flavor Flav followed by the band’s own DJ praise song “Terminator X to the Edge of Panic” (with an hysterical Queen Flash Gordon dicing in the beginning by TX). “Caught, Can I Get A Witness” takes on the hypocrisy of critics of sampling, being that acclaimed and seminal rock’n’roll music heavily lifted riffs from early Black blues musicians  (ask Jimmy Page). The foray into heavy metal crossover with the mindless soap program obsessive “She Watch Channel Zero” with it’s savage sample of Slayer’s “Angel Of Death” middle part (that band is actually funky). The wicked no. 7 songs on each side “Louder than a bomb” and “Prophets of Rage” and the finale “Party For Your To Fight are also anthems to inspiring protest and resistance.

But this album’s best songs were actually the singles, the detonators set for this masterpiece that came out shortly after their debut album came out during their first tour. Signals that had absolutely no choruses like the best protest anthems had. There was “Bring The Noise” (which was actually featured on a eclectic Rick Rubin produced soundtrack from the coming of age cocaine movie Less Than Zero) and the monstrous first single “Rebel Without A Pause” which exploded from college radio and into the national consciousness is arguably the greatest rap song of all time. Both songs are carried by Chuck D.’s devastating lyricism and rhyming steering the seminal James Brown Funky Drummer sample and culminating with Terminator X’s scratching and transforming that rivals any guitar shredding solo in any headbanging metal song.

Despite it’s age, which in the rap genre can be considered prehistoric, it’s relevance is still current and vital and is still felt today even in the unacknowledged song of the summer Childish Gambino’s “This Is America”. You can play this album today and come to the realization that shit hasn’t changed. The media still sucks ass, something this fucked in the head President today still brings up to his advantage. There is still endemic corruption in government, politicians are still bought more than ever before with some actually bragging about it, the states are still improperly vetting and hiring abusive cops and racism and classism are still being perpetuated in a nation more culturally and economically divided.

And because there is any band or artist making rebel music today, this album remains a political soundtrack even three decades later Now that the mass majority of working class citizens and this land that is under siege from this President and his Plutocabinet of greedy morons and a gutless Congress. A looming fascism that will not be said from  corporate networks more concerned with manufacturing consent, the budgetary dependence of morally bereft and loosely regulated giant banks, and a justice and electoral system still controlled by the influence of unlimited and untraceable mass amounts of money.

So since there is nothing out there musically to channel the rage against this existential machine. Might as well dust off this album, whatever format you have it in, and bring the noise again and again. Like MC Chuck D said…

“reach the bourgeos and rock the boulevard.”

One thought on “Armageddon Still In Effect: Public Enemy’s “It Takes A Nation Of Millions To Hold Us Back” is 30”