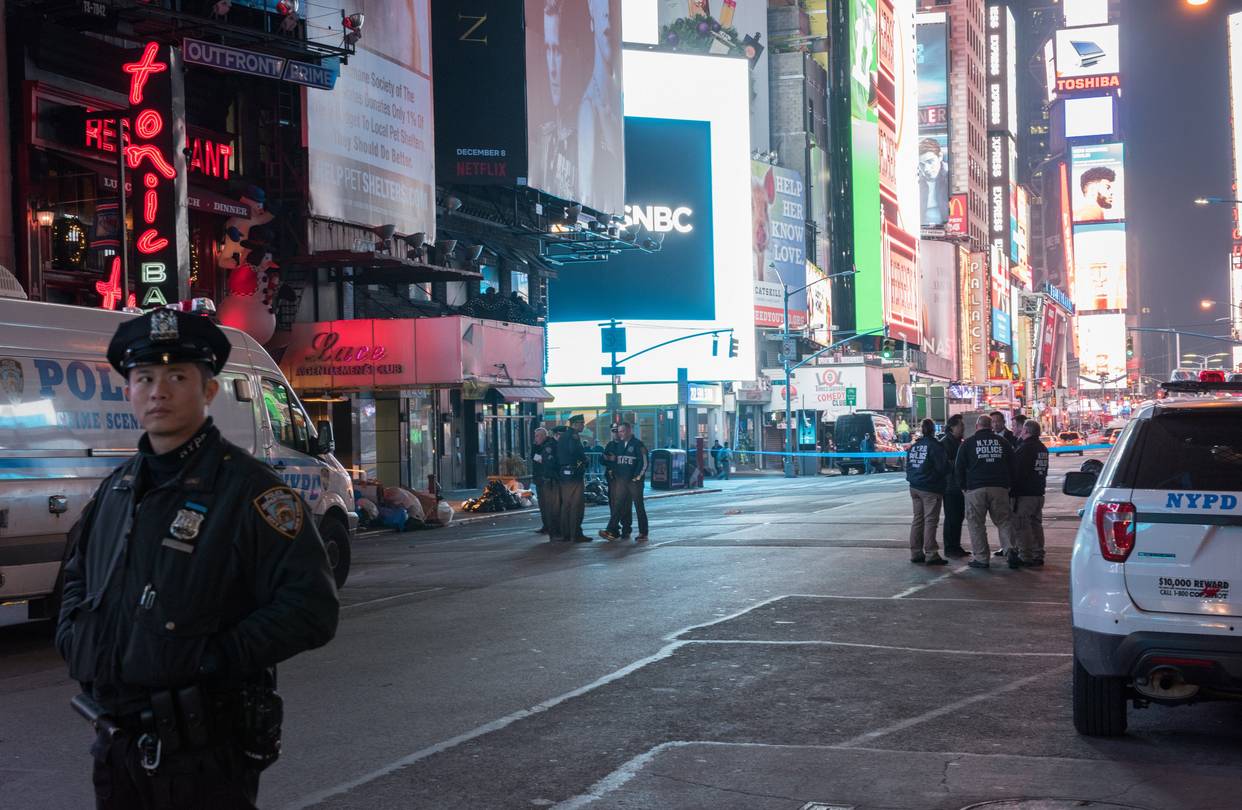 In Times Square at 4 a.m., a man leaving a sports bar noticed two women arguing and tried to intervene when the woman, who was intoxicated, fell on the ground. As he tried to aid her, one of the men attacked him, pulled out a gun and shot him to death on the street.

In Chinatown, a man and woman attempted to rob a jewelry store by spraying pepper spray at two clerks, but ran off with nothing when one of the clerks pushed the alarm button.

Also in Chinatown, a 17-year-old boy was killed instantly when his friend who was driving drunk was speeding coming off the bridge then hitting a curb and crashing into a lamp pole and a fire hydrant.

In East Harlem, a 68-year-old man was kicked twice in the head and chest for no reason by some stupid cowardly asshole.

In the East Village, a man walked into a bank, gave the teller a note and robbed $1,900.

In the Upper West Side, a man going through a divorce attempted suicide by blowing up his house by cutting a gas line, leading to an explosion.

In the Upper East Side at the 86th St. Station, a man attempting to kill himself by jumping in front of a train was stopped by an off-duty police detective.

In Soho, a cop making six figures a year being a glorified livery driver for NYPD top brass got caught shoplifting in a clothing store.

In Rockerfeller Center on the F train, a church deacon repeatedly groped a woman in her private parts.

In Chelsea, a construction worker got killed on the job when a piece of metal scaffolding fell from a building being developed that’s charged with multiple code violations.

In Gramercy Park, two teenage males mugged a pedestrian for his wallet and a man punched a clerk in a deli when he was told he there was a limit for debit card purchases.

In South Ozone Park, a man parked on South Conduit Ave. was shot at four times in the chest and killed.

Also in South Ozone Park, package thefts from deliveries left outside of people’s homes has been on the rise.

In Maspeth, a food delivery bike rider got killed when a tractor-trailer ran him over as it was turning then kept going.

In Flushing, a 4-year-old girl was abandoned on a school bus by a stupid matron after it arrived at her school and was left alone for nearly 5 hours. The contractor Coky Transportation tried to buy the frightened girl’s silence with candy bars.

Also in Flushing, two men invaded a home and beat up a man with sticks when he answered them knocking on his door.

In Rikers Island, an inmate attacked two correction officers with a ballpoint pen, slashing both in the face.

In Rego Park, a handicapped man crossing Woodhaven Blvd. was struck and killed by a hit-and-run driver.

In South Jamaica, a man driving recklessly coming off the Van Wyck smashed into another vehicle causing it to collide into another car and two that were parked.

In Forest Hills on the R train, a man whipped out his little jimmy and masturbated in front of woman.

In Bayside, a 75-year-old man crossing the street by a exit road on the Cross Island Expressway and a poorly thought-out bike lane was hit by a car.

In Elmhurst, a fight between two men in a nightclub escalated when one of them slashed the other with a razor blade.

In Jackson Heights, a man was found dead hanging from a tree.

In Astoria, two armed men posing as UPS workers broke into a man’s home and shot him the leg as he fought them off.

In Woodside, two men robbed a 7-11 at gunpoint, stealing $300 from the register, lottery tickets and $40 and a cellphone from the clerk.

In Sunnyside, a man crashed into a police vehicle after making a sharp turn and running a red light and then pulled a gun on the officer who tried to arrest him.

In Woodhaven, a man attempted to hold up a grocery store with a toy gun.

In Queens Village at Wayanda Park, a gang of men driving lame ATV’s and motorcyles are causing major damage on the grass. 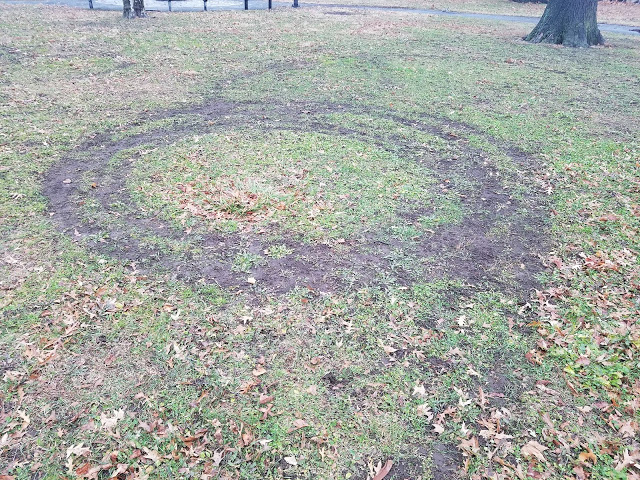 In Crown Heights, a man was shot in the head and killed in front of a bodega at 1:40 a.m.

In Bed-Stuy, a 19-year-old man was shot twice and killed a block away from his home, three men are suspected.

Also in Bed-Stuy, a man hanging outside with friends was shot and killed in front of the Breevort Houses

In Flatlands, a man driving recklessly sped through an intersection and collided into two cars and crashed through a brick wall.

In Bensonhurst, a man who exploited an ill child and manipulated his son to feign sickness in a charity scam snatched a purse off a 66-year-old woman.

In Fort Greene in the early afternoon, a man holding up a bodega shot at the cashier twice, hitting him in the foot and robbed the register.

In Downtown Brooklyn at the Hoyt St. train station, a man jumped the turnstiles was caught by two cops. As they tried to question him, he tried to flee and then he threw his backpack on the tracks as the 3 train arrived. The cops retrieved it and found a loaded gun.

In Coney Island at a beer garden, a man shot another man three times. The victim was found to have been possessing an illegal gun.

In East New York, a man lured a 15-year-old girl to a basement where he beat, raped and robbed her.

In Cypress Hills by the Jackie Robinson Expressway, a dog was found in a garbage can bounded in trash bags and his mouth duct taped shut.

In Canarsie, three goons trying to ride the bus for free ganged up and all threw punches at the driver, then caused damage to the door when the driver shut it on them.

In Williamsburg, a man got killed after losing control while riding his bike then got hit by a tractor-trailer truck driving beside him

In Brighton Beach, a skimmer placed by 2 men in November was found in an ATM inside an Apple Savings Bank

In Soundview, a 92-year-old woman was attacked and robbed by a man who knocked her down in front of church. The man is suspected of a mugging and purse snatching of a 72-year-old woman in a apartment building a few days before.

Also in Soundview, two men held up a bodega at gunpoint and robbed it of $1,000 and two cellphones early Christmas morning.

In Claremont, an 18-year-old man was shot and killed standing on a street corner blocks from his house.

Also in Claremont, a woman was found dead, naked and beaten, on the floor in the kitchen of her apartment on.

In the South Bronx, an autistic 9-year-old boy was found alone on the subway platform at the 161st station because his mother was passed out drunk on the couch in her apartment. She works for the MTA.

At a charter school in Concourse Village, a teacher courted a twelve-year old student for naked pictures of herself to send to his social media account and then molested her and sent her pictures of his genitals via the same platform, keeping up the lurid perverted sharing for 5 months.

At Pelham Bay Park, people are taking trash from their homes and dumping it in the parks garbage cans

In Norwood, a four alarm fire spread through an apartment building around 4:30 a.m.

In Port Richmond, a man shot his pregnant wife to death in the hallway by their apartment after an argument.

In Fox Hills, a 90-year-old man was awoken at 3:00 a.m by a burglar who broke into his home who robbed him of $35 after a physical struggle.

In Stapleton, a woman and her son that were being followed by a black SUV were shot at in her car coming from it.