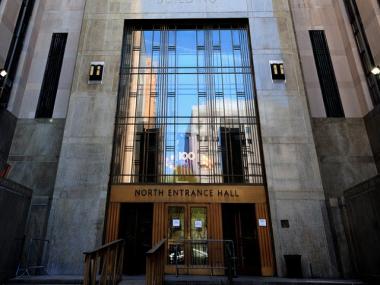 Manhattan Criminal Court. This place looks fun, and by golly it will be.

The N.Y. Daily News had a little news nugget on their Thanksgiving Day paper that got totally overlooked and virtually ignored. Even by the editors themselves for this story of craven wasteful city funding and bureaucratic absurdity is not even available on their website. Talk about manufacturing consent! (It’s on pressreader, which gives the feel of reading a file at a library).

This news item is so outrageous, comically surreal, and disturbing that I don’t know how the Post didn’t get it. Because if it did it surely would have been on Fox local and cable news. But it was on page 28 in the publishing purgatory between the letters to the editor and sports pages.

Written by Erin Durkin, highlighted, sprinkled with occasion profanities and emphasized by JQ LLC of Impunity City. Your City.

The City is trying to build kinder, friendly courtrooms.

At the Manhattan Criminal Court, judges are being urged to watch their language-avoiding legal jargon, calling people by their name rather than “the defendant” and greeting people when they enter.

Defendants will be surveyed on their experience in court – and get a $15.00 Dunkin’ Donuts gift card for filling out the questionnaire.

“If a litigant feels they’re being treated with respect, they have an idea what’s going on…they’re more likely to perceive the process as fair.” said Adam Mansky of the Center for Court Innovation, which is working for on the program with the Mayor’s Office of Criminal Justice and Office of Court Administration. “They’re more likely to comply with their obligations, come back to court, pay their fine.”

The city is picking up the tab for the program, which totals fucking $800,000!

In meetings with judges, court officers and clerks, the groups will encourage courtroom personnel to introduce themselves, say good morning, and ask if everyone can hear what’s going on.  Judges are being urged to say that they assume the defendant is innocent and not refer to people as “defendants” or “bodies”, instead calling them by name.

The surveys will be given out to people leaving arraignment and other trial parts of court.

It asks people how confident they feel in police, prosecutors, judges, their defense attorney, and whether they think the criminal courts treat defendants with dignity and respect, according to a copy of the questionnaire.

The gift cards are being given out because research ethics boards frown on having people participate in research without compensation, Mansky said.

What we have going on here, is not something being reported in the Onion, but a real stupid expensive program and the latest de Faustio policy travesty to turn courtrooms into wellness experiences. Like as you would enter a discount department store or a blandly vibrant workspace office building.

Note that judges are being urged, which sounds hostile on its face for a thing that promotes tolerance and sensitivity, to implement these new standards because the word defendant, which what the accused actually are is somehow offensive.

Maybe the most pressing thing about this is who the fuck is this dink Mansky and what the hell is this Court Innovation Center and when was it made? This program sounds like something out of a dystopian cartoon. So there are going to monitors wandering around that big dark building making sure that judges abide by these milquetoast rules. How is this going to work? “Will Larry/Plaxico/Kim/Demi/Andre 3000 take the stand?” “How do you plea, Matt/Taylor/Meek/Judy/Bababooey?”. And the judges have to personalize the dead victims too? Like a random victim or rival of some gangbanger, a career mobster hitman’s trail of bodies or a bunch of serial killer’s victims? Really, with the latter the judge has to name all of them? Holy shitballs.

And it’s going to fleece the tax payers of 800 large. I wonder how much of that pile is going to dunkin donuts, which sounds like they are sponsoring this retarded program, and that’s pretty lousy and unhealthy comp. More sugary junk to fill their guts, like their lives don’t suck enough that the defendant raped or murdered somebody.

I wonder how many people are going to be monitors, because this sounds like the bulk of this cash is going to the monitors themselves in bloated six figure salaries. Which the city and said monitors will justify by holding meetings every day to indoctrinate this undignified, insulting, redundant, cordial human resources corporate bullshit. Telling those responsible for meting out justice, securing the areas and pushing buttons all day how to present and conduct themselves. This will go over swimmingly with the certain to be disgruntled personnel.

I can’t wait to see how these surveys will be conducted with uncooperative men and women on trial unsatisfied with their verdicts and conviction: “That fucking judge sucks” “That pig set me up” “He looked at me funny so I had to steal that guard’s gun” Fuck this survey shit, gimme that coupon anyway, I wanna an Frappe and a half dozen bow ties, motherfucker”

This program sets a new lower bar for the day mayor de Faustio mayoralty II: The Phantom Mandate; which includes the other asinine behavior and thought modification program, the offensive statue panel and the creation of the nightlife mayor. The court system probably does need some improvement, I don’t know what that actually is, but trying to turn it some swell time social function is unrealistic. But reality is also a offensive word to the Mayor and his happy fauxgressive dunce cult. This program with it’s made up bureaucracy is like if Mr. Rogers had a criminal courthouse in his Land Of Make Believe (at least that transit system worked efficiently)

If this doesn’t work out, or if it’s suddenly terminated because of the sheer stupidity of it, I foresee the next program will involve a new format. Probably theatrical song and dance with choreography. Knowing this stupid Mayor and his habit for squandering millions of dollars and his proclivity for starfucking, he will probably commission Lin-Manuel Miranda to oversee, conduct and choreograph it.

Here’s hoping this stupid fucking idiot is more frugal and give it to Reba McIntyre and Steven Bochco of Cop Rock infamy. He is well aware of impending federal cuts from his political yang to his yin Donald Trump as he likes to reminds us to divert attention from his current and inevitable policy failures.

Update: Tronc did post this crazy story on the Daily News website on Nov. 22. It was easy to miss because it was published at the end of the workday and also wasn’t easily available with a google search by going by the paper headline, so apologies and kudos to them.

Another Update: Video footage has been found of “Court Innovator” Adam Mansky’s prior work at a high school 25 years ago.