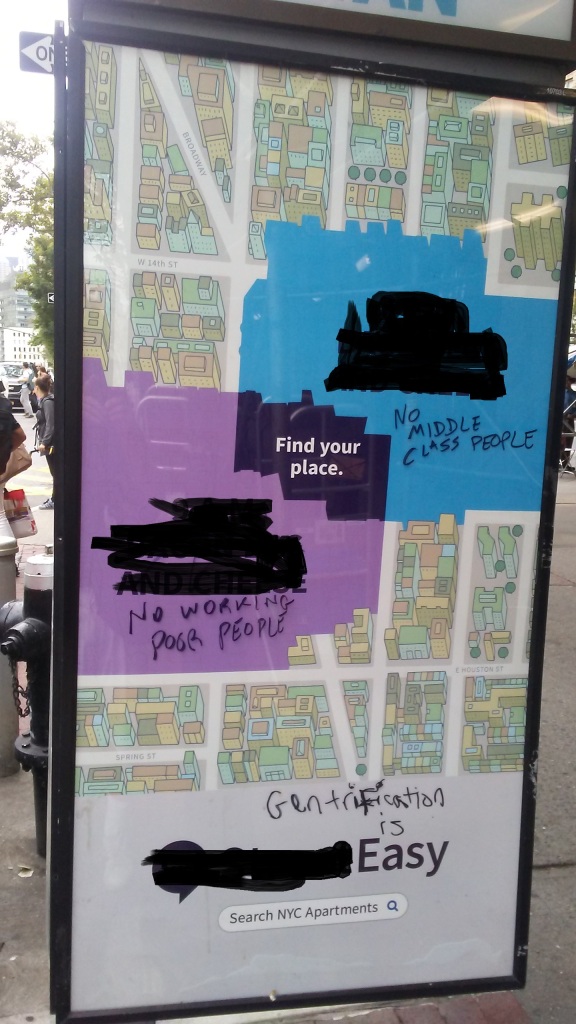 For all New Yorkers stuck in the same shithole apartment, studio or single occupancy room, or someone who is homeless (which makes about over 65,000 of you), the wait for a decent place to live and to save a few dollars more simultaneously while under Mayor Willie de Blasio Wilhelm has been an arduous and unnecessary test of patience the last near 7 years he’s been on the job. And it’s gotten more difficult under the pandemic and the purgatory economy benefiting the oligarch class, even if you are an essential worker too as rents are still too godamnn fucking high despite incremental dips in the five boroughs. But now Slick Willie D has found some spare time on his hands following his hat trick of criminal incompetence with the initial COVID-19 outbreak response,  the reopening of schools and his horrendous insouciance of the NYPD’s handling of the BLM protestors that he has suddenly decided to retake initiative to provide more affordable housing for the people by looking to upzone and rezone the niche upper class enclaves of Soho and Noho in Manhattan.

“Affordable” and “SoHo” aren’t words New Yorkers are used to hearing in the same sentence, but if Mayor de Blasio gets his way, things could change in the upscale neighborhood.

The city would rezone SoHo and NoHo with the goal of getting 800 units of affordable housing built there, under a plan Hizzoner announced Wednesday.

The proposal targets a square bound by Canal St., Sixth Ave., W. Houston St. and Lafayette St., with a sliver of blocks leading up to Astor Pl. The area was last zoned in the 1970s with the intention of helping turn vacant manufacturing sites into lofts for artists and others, according to de Blasio’s office.

Since then, SoHo has became one of the most expensive neighborhoods in the city, replete with luxury apartments and fancy boutiques for international brands.

De Blasio’s proposal would pave the way for 3,200 new homes and include requirements for developers to construct affordable units.

To make this more clearer after the mayor and his cult-like administration announced this with such ludicrous fanfare, the plan is to construct 4,000 new apartments and give the majority of them to wealthier people and an incremental amount of 800 apartments to much lower income earning people if they are lucky enough to hit the lottery and if they are even if they are qualified to obtain them (which makes this a 75/25 program)The most obvious and offensive thing about this laughable proposal is the massive discrepancy between the people who really need a roof over their heads like the homeless or a better roof over their heads and not have to spend 5.50 a day to commute and upper class people.

Behind the Blaz’s pathetic blathering and umpteenth attempt to promote himself as a progressive, this is just a continuation of the inherently neoliberal concept and policy behind the Housing New York program initiated under former HPD commissioner Alicia Glen to build 300,000 “affordable” apartments by 2025 in a city of 9 million people where about 1/3 of them live paycheck to paycheck and spend 1/2 of their check on rent. Going by this dynamic, by the time of this program’s completion and by the metric by which de Blasio and Glen and their associates justify as the only way Housing New York work is to build more market rate units to fund the affordable ones resulting in more funding and effort to provide housing for those who have the means to get any apartment they want over the higher demand of all those who have no means to get an apartment in this ossified high speculated/fabricated market.

It’s truly uncanny timing that the city decided to revive funding for building new housing  after recent budget cuts to the Housing New York program from last year and right when COVID-19 hit the city. According to de Blasio’s HPD, they built and preserved 166,000 affordable apartments so far in the 10 year Housing New York plan. But with what the city touts and labels as “affordable” it’s tough to gauge how many of those apartments went to higher earners and how many unaffordable market rate apartments were built above them. Oh, that’s another thing, the majority of these apartments weren’t built, they were units that already existed. As for preservation, somehow the affordable housing of NYCHA was not included. Ceilings collapsing, lead still present, no heat all winter and no gas to cook; somehow that real affordable housing that has always been here doesn’t count.

.An earlier city count from a few years back, showed that 85,000 “affordable” were constructed, so going by the mandated ratios of what developers build, whether they be 80/20, 75/25 or 70/30, it’s likely that over 300,000 new market rate apartments were built along side them during that time. And when they build these mixed use towers, they consequently drive up the market where they rise, and whatever they preserve winds up getting again lost to the real estate market and exacerbates gentrification.

Plus there’s the pressing questionable issue of the city’s data about the affordable housing they created. And it’s the fact that the word affordable has been redefined in certain enclaves in Queens and Brooklyn…

As for preservation, there’s not much bragging about NYCHA coming from the confederacy of dunces in city hall. Ceilings collapsing, lead still present, no heat all winter and no gas to cook, somehow the real affordable housing that has always been here doesn’t count.

Another funny thing about the NYC Housing program is that they managed to redefine what “affordable” means. Here are just some recent examples from the past year and some of these “affordable” apartment buildings resemble condominiums, like this one in Bushwick with rents that range from 1,900 to 2,400. Another one in Woodside, mostly middle class neighborhood goes up to 2,500 .  A lux looking building in Bed-stuy with “affordable” rents starting at 2,500 a month. Another couple lux condo looking buildings in Williamsburg with rents starting at 2,200 and 2,300 and in Greenpoint ranging from 2,300 to 3,300. A new monstrosity in the condensed metropolis of Long Island City has affordable apts. priced from $2,280 to $3,400. A box building in Jamaica has rents for two bedrooms for $2,100 for household incomes around the 70-110 grand range despite the fact that the average household only makes a little over 40,000. And a new lux looking apartment building on the Brooklyn/Queens border in middle class Ridgewood starts from comparably less than the others at $1,700 for “affordable” studios going up to over 3,000 for two bedrooms, sure that doesn’t sound so bad except when this mixed use development initiated, the studios were supposed to go for $1,000 a month.

Another ludicrous thing about Housing New York is that people with higher household income ranges for these apartments have a way bigger window to win the lottery and qualify for than for the 20% lower income apartments in many larger buildings that went up in the last 5 years. Take this chart from a new development of three new buildings at Hunters Point in Long Island City: That’s what makes this as irritating as a scab. While the Blaz and his crack committee are talking about the affordable units, they never mention how many non-affordable units were constructed and you’ll be damned to know if you try to find it. But there is one thing that is known, it’s that the NYC Housing plan is actually based on segregation. For a good couple years de Blasio tried to obfuscate what the racial demographic data was for affordable apt’s in buildings were when three women were having consistent trouble getting access to them via the lottery and with the aid of a Queens College professor and a federal court order, the three women and a lot of people’s suspicions were confirmed that the lotteries and the access was fixed to keep the communities where these buildings were free from race and class miscegenation. And also to foster a new hip and upscale cache’ to these towns

Because this Housing New York program has been a trojan horse and marketing campaign from the start.  Which is what should be expected of de Blasio because his whole time in office has been a meticulous public relations campaign to build his political profile.

But now the the Gentrification Industrial Complex audaciously claim and j’accuse Soho/Noho residents,  civic minded skeptics that they are against racial equity with this plan which sounds more like a land and air grab to immensely profit from. Besides the profiting from the gentrification, the developers also make off big with more tax exemptions and tax subsidies for these incremental “affordable” apartments which was gifted to them when the 421a law was “reformed” by Governor Andrew Cuomo.

Supposedly the reason behind this affordable housing program is that it’s supposed to help the people who don’t earn a good NYC salary and to bring down inequity. But after 6.10 years of Blaz gaslighting and narrative control, who can actually believe him now?

So who is really behind this push?  Surprise, surprise: Big Real Estate. Especially the Gottesman family real estate dynasty behind Edison Properties, whose firm sits on REBNY’s Board of Governors. Two of Edison’s large parkings lots sit in the proposed upzoning, making it the ultimate beneficiary. Citizens Housing & Planning Council’s (CHPC), which includes an executive from Edison on its board, published a piece supporting the upzoning. Among the many other REBNY notables on CHPC’s board is the legal & lobbying firm of Kramer Levin Naftalis, who is running a print and TV media blitz in support of the upzoning. They’ve advised the land use process needs to be underway to ensure it’s done by the time de Blasio leaves office, presumably because anti-real estate sentiment in the city is only getting louder. We can connect the dots to see why this was suddenly resurrected during a global pandemic: time is running out for Edison Properties to develop their lots under a favorable regime, not because of “anti-police protests sparked by the killing of George Floyd” as Deputy Mayor Vicki Been shamefully said.

Precisely, and as with every time de Blasio suddenly gets proactive with a city plan, filthy lucre is behind it. Because two partners at Edison donated thousands of dollars to the Blaz’s notoriously corrupted Campaign for New York 501c4 Pac that he ran in city hall. Just as shameful as Vicki’s gross malaproppriation by conflating of the George Floyd protests with her office’s neoliberal housing program, is the fallacious reason that the So/Noho zonings have to be done to bring forth racial equity to the areas. But it just shows that the Blaz and his minions will say anything to justify satiating the greed of their owner donor developer overlords.

Because as I posted the other day about a mixed use building that Housing New York included that was already being built in Soho, these apartments are groomed for higher incomes as well as the towns they are placed in. Prioritized for wealthier people than those that make up the majority in the city, leaving those who earn (way) less in the lurch. This is rudimentary gentrification by design. A housing caste system for barely affordable and affordable luxury housing, leaving all those who earn (way) less in the lurch, left to remain in their places or no place at all.