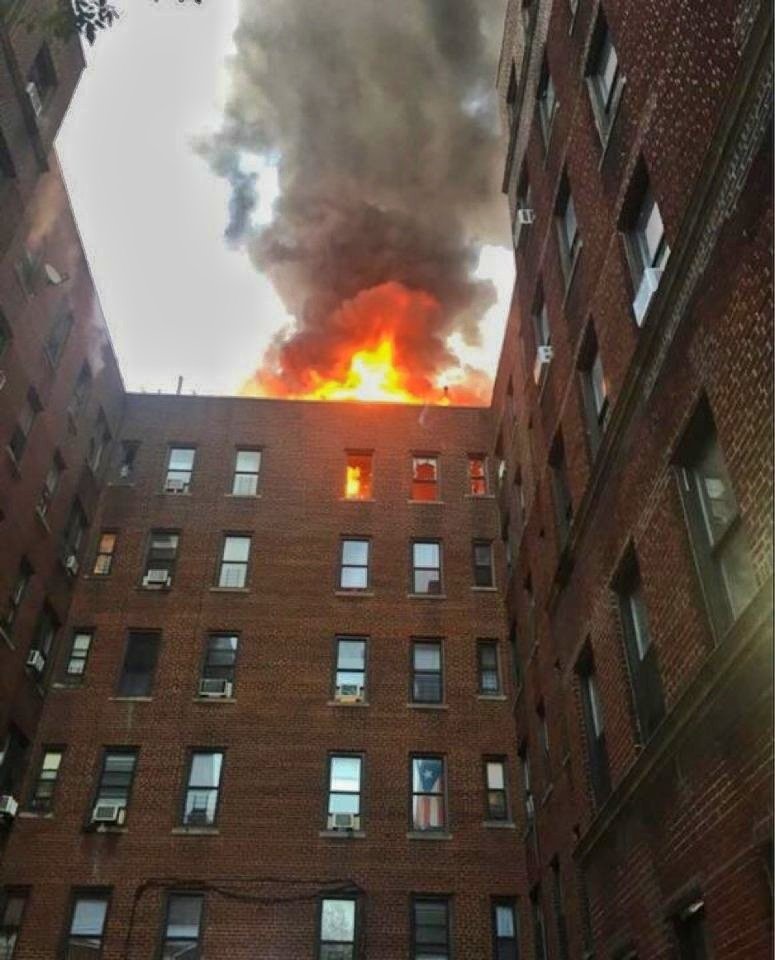 Residents of 1920 Walton Ave. affordable housing building of the now misnomered town called Mount Hope, mostly working poor, disabled and elderly, woke up early one morning to find their building on fire and their lives upended and out on the street with the clothes on their back. And also with practically no idea of where they will be in the future. Although with the way this city treats the functioning members of society and senior citizens, probably in hotels and motels in the area or in the outer boroughs, despite the city’s claims of keeping them close to their original addresses.

The fire was determined to be accidental by the NYFD because of faulty electrical wiring in the ceiling of the building which is where it ignited and spread on it’s way down to the apartments. Nearly 200 firemen where dispatch to put out the destructive 5-alarm blaze.

It’s easy and understandable to suspect arson, knowing the city’s and the Bronx’s history during it’s worst economic and drug epidemic crisis, but there is no doubt that willful neglect by the current and prior owners led to this tragedy. The building according to DNA, has a notorious history of elevator disrepair going back to 1995 and had prior instances of fire hazard faulty wiring issues. The building, which is currently owned by get this, 1920 Walston Ave. LLC, continued to deny service requests of the tenants, who were clearly too poor and powerless to pay any mind to. And also vulnerable because of the fact that they were lucky enough to be able to live in an apartment at the amount they were paying in a city with maniacal rising rates.

It is not known who or whom consists of 1920 Walton Ave LLC, because it’s base is in Lakewood, N.J. and you need a password to find out. The free newspaper Metro could not even get a hold of these mysterious owners.

The burn about this, no pun intended, is how did this building miss out and did not seem to qualify for Mayor de Faustio’s affordable housing plan for the preservation of such affordable housing. How did this one miss out in the mayor’s promise to end the tale of two cities? This building would have been a shining example if it got the proper attention from the mayor and especially from the perpetually inefficient D.O.B. that for years let this building rot without proper and diligent intervention. This is truly a disgrace and a harbinger of the city’s priorities in their lame version of service or blatant lack of it in helping the lower class and indigent.

It’s too late for the former residents of 1920 Walton, but after years of languishing in hotels before some of the 90 shelters as promised by Mayor Big Slow get built wherever in the Bronx or if they are lucky to win the miniscule affordable apt. lottery in one of his donor’s towers, there is a slight bright side to others trying to maintain and remain in their own affordable apts and that is the recent decisions regarding two mega-developers and their own transgressions; Steve Croman and Icon Realty.

Steve Croman recently got convicted and sentenced for trying to scam banks with a partner of his for false claims of market rate apts and for 8 years for terrorizing rent-stabilized tenants in the East Village to force them out to execute the scam. This notorious scumbag relied on a sadistic ex-cop to intimidate his fiscally responsible tenants who were not paying enough for living there and in his buildings in East Harlem, by stalking, breaking and entering and reading their mail. He was basically Steve’s economic hit man.

For the amount of time and energy this demon was harassing his tenants with his hired goon, he also used the pioneering abusive tactic of using gut renovation of vacant apts., causing environmental noise and air quality hazards to goad rent-stabilized tenants into leaving and even recent market rate tenants to intimidate them if the speculation gets a little higher for even what they can afford. 8 years is not enough for this kind of evil, and even though it has passed, he certainly did not deserve to observe the Jewish holy days despite paying 3 million to do it. He did get to lose his broker license, but he still gets to reap the rewards of his insidious and heinous labors from his owner status which is less than the 45 million dollars that he was going for but he will still be able to throw a big hedonistic homecoming party in the Hamptons once he gets out and if he survives a shivving.

Steve’s pioneering and monstrous tactics have inspired a comparably young predatory developers in his neck of the metropolis to do the same, only to lead to fiscal punishment for their equally heinous efforts, and it’s not the advisor to the current POTUS (which may be why he was pushing hard through the weekly paper he once owned for Figurehead Trump to win). Icon Realty has been using the same diabolical, contemptible scheme to induce their lower-paying tenants to leave. Although amateurish in comparison, they still mismanaged their buildings enough with roughshod and reckless construction with making the renovations to apts by making them smaller to attract dumb transients to pay the preposterous market rate, in effect causing pervasive dusty conditions and the ceilings below them to crack. Icon also repeatedly shut off the gas on tenants for lengthy periods of time. Instead of hiring a goon to scare residents although they did engage in persistent attempts at buying out their tenants, Icon hired a publicity firm to ward off the hundreds of accusations of shitty treatment they were giving their tenants. Icon also exploited the tragedy of the 119-121 apartment building explosion to force a long time beloved small restaurant Stage to go out of business.

For all the chaos they caused and after years of enabling by the slow process of the justice system, the D.A. in conjunction with the REBNY jesters Mayor de Blasio and Governor Andrew Cuomo, fined Icon a measly $500,000 to be paid back to the city. Which seems just a pittance after all the misery and inconvenience their intentional and kind of clumsy nefarious acts have caused, which could have been prevented and avoided if the D.O.B. had even a percentage of competence and efficiency. But it seems the speculators for real estate have too much sway and influence that it takes precedence over regulation and enforcement

The lessons and decisions being meted to Steve and Icon are only a temporary fix, and seemingly in tune for the coming elections. The problem with these recent judgements is that these guys should have been investigated a long time ago. Especially the case of those unnamed elusive villains who run and burned 1920 Walton Ave. in Mount Hope. Mostly, these properties should have been priority one in this supposed preserving of affordable housing as well as the NYCHA buildings.

Steve Corman might no longer have control or say anymore over his properties but Icon still does as well as many, many other baby predators. And they all are big contributors to City Hall on Park Row and the State House in Albany. In spite of these recent charges, their records show transgressive recidivism and cannot be trusted. Even though Icon got pinched a little bit from the city, they are still entrusted to preserve the affordable housing they lord over. The only progress is for harsher penalties and longer sentences in prison. Particularly in a cell next to one going under gut renovation for the entirity of his or her term.