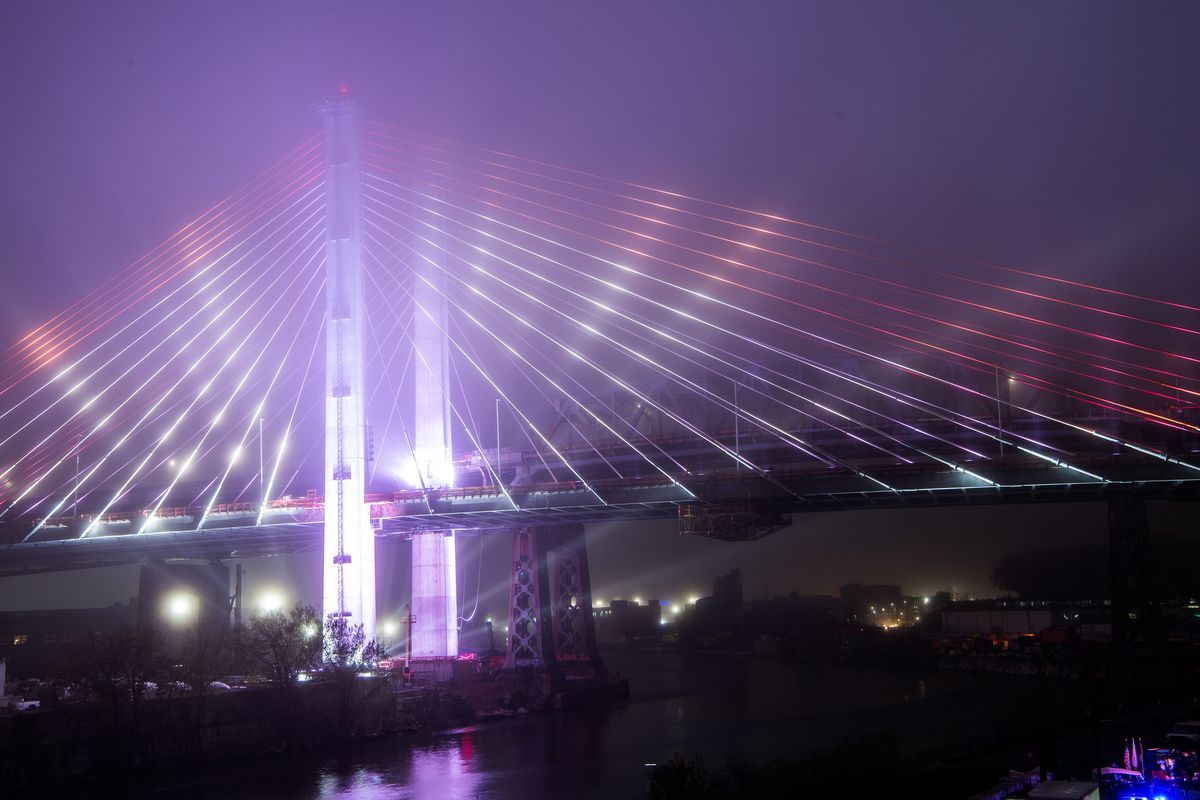 On an overcast Thursday evening above the polluted creek dividing the boroughs, our governor and tax payer funded glorified event planner and party promoter, Andrew “Mario’s Son” Cuomo opened the new Kosciusko bridge, a name he still can’t pronounce, to great cheesy fanfare to about under a hundred attendees and assembled elected officials, appointed aides, corporate news vans, and assembled cops and EMT’s to provide security and medical aid in the unlikelihood of a terrorist attack.

He christened the bridge with a drive in a vintage car once occupied by Franklin Delano Roosevelt, which had to be procured from a state museum and restored for use. The speculative costs for this vanity joyride is surely not cheap and sure to infuriate everyone who has to commute after this pompous act of self-aggrandizement. The only good takeaway from this sight and the subsequent mocking footage of Andy’s little trip is that he resembles Raymond Babbitt driving his dad’s car for the first time on a hotel driveway at Las Vegas in Rain Man.

After fulfilling his life long dream of driving a car that was used previously by a politician that Andy will never hold a candle to for what is ultimately some aspirational photo op for his DNC approved presidential bid, the long awaited and heavily promoted  promised debut of the bridge light and music show. It did not disappoint to say the least, for you can’t disappoint if it already sucked. Get ready as Governor Cuomo pulls the switch!!

Immediately noticeable is that the title posting on the youtube supplied by Mario’s son’s office refers to new infrastructure as the “K”, maybe it’s for brevity or to start a nomenclature trend, but that not only that Andy still can’t pronounce the name but probably can’t spell it. And to thwart any silly internet wisecracking or valid counterpoints, unfairly derided as trolling, GovNYCuomo closed the comments section (very clever Andy).

And for all the pomp and circumstance and millions of dollars in ad production and paying for broadcasting time promoting it (these ads are not available for online viewing, very clever again Andy), what the gargoyle prince of the state gave all those passing by and in attendance by the polluted creek was a display of cheesy lighting befit of two decade old windows media player 9 visual download plug in. So lame was the visuals that when the lousy laptop dj supplying the tunes, who sped up the city ballad anthems of Billy Joel and Frank Sinatra so they terribly segue into and from heavier and danceable jams by Ace Frehley and Alicia Keys. The worst part may have been when “New York State Of Mind” went into “New York Groove” and the visual produced on the latter song hilariously was syncopated to the beat. A drunk with a flashlight could probably do something comparably entertaining. And this was just the first part, this thing actually had an intermission.

The second part played 3 songs in their entirity that was supposed to fit the theme of Mario’s son’s glory hogging achievement (why didn’t they just play the NY songs in full instead of poorly mixing them in a medley?) The first was the worst song of all time, “Happy” by Pharell Williams, the second was “Signed,Sealed, Delivered” by Stevie Wonder and the last was inexplicably was “Born This Way” by Lady Gaga. The meaning behind this setlist could mean that with this bridge and show, Andy brought happiness, he signed, sealed and delivered it, and his political legacy was anointed to him at birth or yearns to be a unapologetic flaming drag queen.

All this effort exhibited and executed for a little ass bridge over a smelly ass creek in grossly, obscenely overvalued rental market rate areas certainly took precedence, if Cuomo and his stalwart aides deigned or cared to notice over the alarming recent state of a bridge across the borough of Queens, the Whitestone Bridge, reported by a concerned citizen, Alfredo Centola, last Sunday.

Severely scary stuff. This was after a rainy day of scattered storms. Looks like there is an alarming breach on the south side of the bridge. I am not an engineer, but this comment should be noted for future reference:

The new roadbed is already cracked, the runoff isn’t making into the drains.
The real issue here is whats going on inside the structure we cant see (or some contractor doesn’t WANT anybody to see)!!

Its a drainage failure alright. The fail could be 800 feet away in the suspended part of the roadway
Now if an expansion joint or roadway rebar and steel re-enforcement eventually fails due to rust & corrosion guess what happens ?

What is it going to take to get this the refurbishment or attention it needs. Does it count in this new New York, it does feature the bridge in the new ads promoting growth and prospective bridge light shows, but it has various big buts against it. There isn’t any mass transit near the bridge in both boroughs, it’s not bike accessible, and the residency there lacks the millenial demographic with all their senior citizens and families with children. Still this is one of the major bridges, if not one of the biggest in the city. And it would really be a bit of a disaster if it developed a sudden sinkhole as cars are finished crossing over or heading to the Bronx, and who knows the conditions of the middle of the bridge.

So our stargazing future and event promoter governor better not park FDR’s car back in that museum or let go of his tech laser light show buddies yet, because he has to roll up his sleeves, creak his neck east, come up with some other fond memory of his cursing father and get some professionals over to Whitestone, stat. If he is such the big boy bridge builder and want’s to be the next leader of the free world in 4 years.