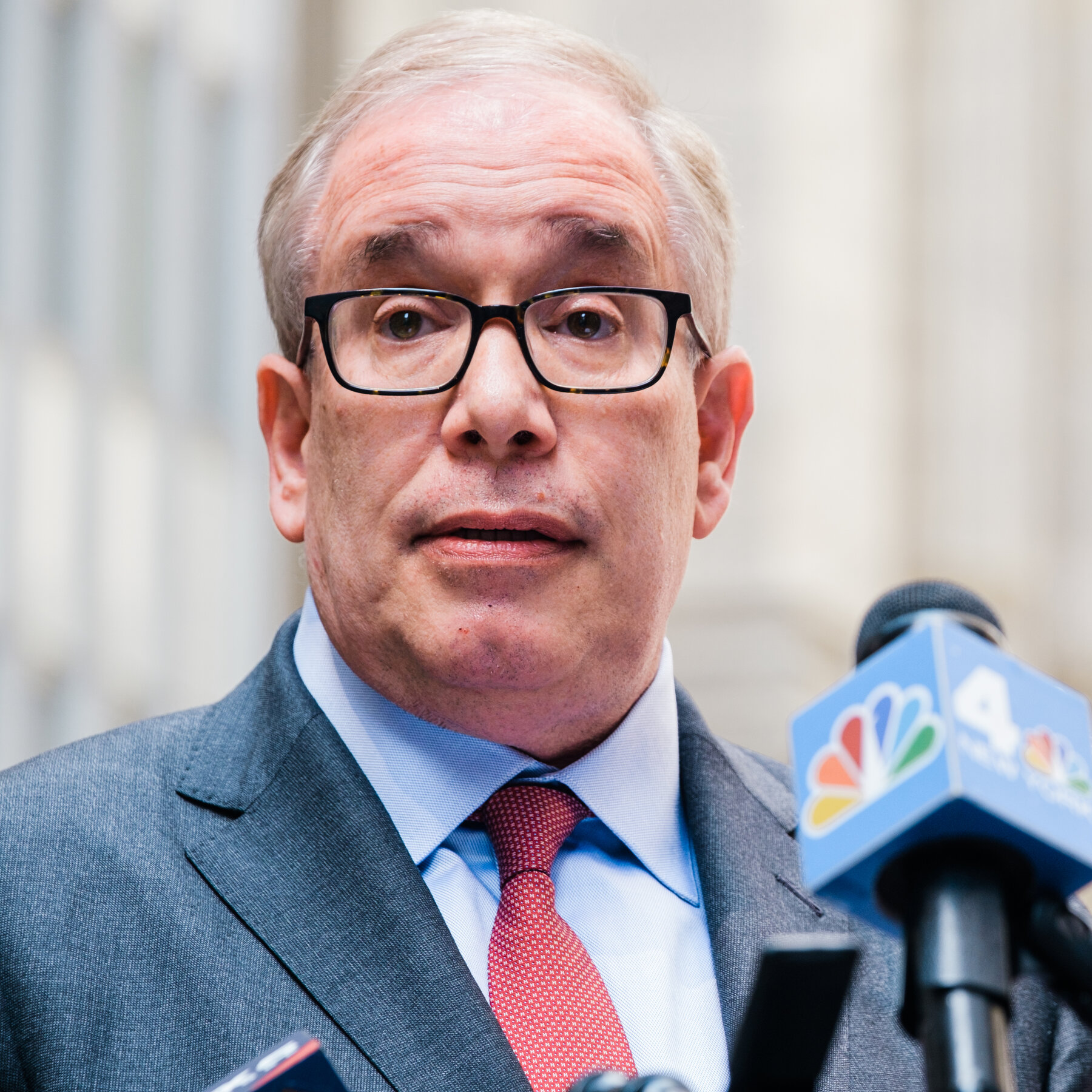 Now that his disastrous mayoral campaign is over and 30% of registered voters chose Eric Adams to be the Democrat nominee for Mayor, NYC Comptroller Scott Stringer has gone right back to full-time work and dad gum it he is not going to take it anymore.

Stringer brought his stump back out and announced that Mayor de Blasio has held onto the city’s emergency powers and control of budget spending way too long, so he’s decided to take the Blaz to court to get them rescinded so he can manage the city finances again for the remaining 5 months of his term.

But for all the grand gesturing and authoritative shit talking, Stringer is just frontin’ like a punk, establishing once again why he got easily destroyed in the primary. Because the wimp allowed the Blaz to enact those emergency orders to control spending on a day one and did not say a peep about it knowing full well the mayor’s history of profligate wasteful and political patronage derived spending throughout his abominable two terms, enabling the Blaz to embark on a chronic gambler spending spree while exploiting his new authority throughout the pandemic.

What’s worse about Scotty’s sudden display of balls is that he hasn’t even literally got in the Blaz’s face about his chronic abuse of the emergency powe, which he revealed quite pathetically during a brief questioning from a  NY Post reporter who mockingly asked Stringer why it’s taking him so long to use his position as the city’s accountant to reclaim the reins of the city budget again from the unaccountable mayor’s idle hands.

Comptroller Stringer: “We have to come back time and time again to demand accountability and a court action is a last resort, common sense is a first resort, and we haven’t seen that in this administration and we are coming back with a court action because we have to get to the bottom of this”

NY Post: “have you actually spoken to him and (snicker) asked him if he (Blaz) was going to restore the actual safeguards that didn’t exist before?

Comptroller Stringer: “We gave him documentation and sent him no less than 4 letters and we can provide them”

NY Post: “But have you personally (chortle) spoken to him and asked him?

Comptroller Stringer: “I don’t have to speak to him to ask him by letter to do the right thing.”

Comptroller Stringer: “No, I haven’t spoken to him personally”

Holy calamafuck, the NYC Comptroller never once confronted the NYC Mayor face to face and eye to eye about his repeated malfeasant emergency power grabs, which he reinstated 100 FUCKING TIMES  while spending 8 billion dollars on lousy contracts and financing dubious services that weren’t necessarily essential to the city during the “perfect storm of COVID19”. (Like open streets and bike boulevards)

For the last 16 months  since The Blaz mimicked Governor Cuomo by assigning himself emergency powers, Stringer took pussy to a new level, letting the Blaz make his government appointed job irrelevant and sat there and watched him piss away the city coffers from the start of the pandemic and even this year in our alleged recovery now that andemic restrictions have been rescinded by the state and national levels and in the five boroughs by the mayor himself.

The Blaz’s proclivity for profligacy was exposed immediately after he usurped the comptroller’s purview when he doled out a massive contract to deliver ventilators and masks to the city for nearly 120 million dollars to  tech accessory/hipster toy distributor and art dealer buddy David Trebele, who donated over $45,000 dollars to his 2017 re-election campaign and to both of his illicit PACs for his idiotic presidential run. After this political patronage deal went down as hospitals were getting swarmed with patients and were still perilously low on supplies, leading them to recycle their masks and wear garbage bags to protect themselves from COVID, Trebele’s LLC company Digital Gadgets failed to deliver the PPE’s and none of the 3000 ventilators that were ordered ever arrived. Comptroller Stringer, neutered of his elected role because of the evisceration of his duty and office to vet contracts with companies that had no record of doing any business with the city before, didn’t verbally say a single word until late August of the Blaz’s corrupt mishandling of his emergency powers for his buddy’s contract and subsequently abusing them to approve contracting for other city services in usurpation of Stringer’s supervisory elected duties.

It’s good in some way that the Comptroller is taking decisive and legal action now, mostly because the Blaz possibly can’t recycle his emergency powers now because the actual emergency has mostly dissipated because of the state’s and the city’s lifting of pandemic restrictions, although the delta variant has become the dominant contagion. But the Blaz doesn’t even acknowledge the severity of that strain so it’s really all about maintaining and micromanaging control of the city’s coffers. But Stringer’s belated action is a year and half late and 8 billion dollars short, because nothing happened when he sued the city back in November and the Blaz continued to control the city’s finances and weaken regulations while obfuscating and refusing to release city records concerning his budgetary decisions and most frighteningly the city’s health records and statistics during the pandemic since that’s the reason why the Blaz justifies his repetitive do-overs of the emergency powers.

It’s not like Stringer didn’t know what was going on, he knows the Blaz’s record and recidivism and all that was in monstrous form from the beginning of the pandemic to today, especially after the latest bloated reserves drained budget that was passed by Corey Johnson and the City Council cronies last week that the mayor will devour from in his final 5 months. But it’s quite apparent that Comptroller Stringer lost sight and relinquished his governing powers to the Blaz because of his own sad and vain quest for the mayor’s office and now that he’s lost he’s desperate to regain his significance as an elected official, which is pathetic after the way he’s been humiliatingly mocked and undermined by the Mayor, his taxpayer funded pogrom of lawyers and even by his little maggot press secretary Bill “Cry About it” Neidhardt, who never stops reminding the Comptroller about how his demands for accountability are nothing but political stunts to get media attention and not the fact that it’s his elected duty to demand accountability and also to moderate the city’s checks and balances.

“During the greatest challenge our city has ever faced, emergency procurements have saved lives, period,” said spokesman Bill Neidhardt. “The comptroller is clearly trying to use this lawsuit to keep himself in the headlines after his failed mayoral bid.”

But Big Bad Blaz’s little flack is not the only one to publicly make light and take advantage of Comptroller Stringer’s chronic fecklessness. Just as COVID-19 was about to attack NYC, The Blaz bought 17 decrepit apartment buildings that were being used as cluster housing for homeless people from two slumlords for $173 million dollars for 4 times of what the city initially offered for them so they would be added to NYC Housing’s farcical affordable housing program despite one of Comptroller Stringer’s “strongly worded” letters to him. The Blaz’s tax boondoggle wife Chirlie also treated Stringer like a doormat when she refused to provide details about her grotesque misuse of nearly a billion dollars for her mental health program THRIVE.

The abominable real estate lobby proxy office Economic Development Corporation also wiped their crusty dingleberries with Stringer’s strongly worded letters when he wanted more accountability for the wasteful spending on the tax dollar hemorrhaging  transit alternative NYC Ferry when they went along with purchasing $130,000,000 of new boats from a San Fransisco contractor despite it’s consistently daily low and strictly upper class commuter use. And last but not least, the Blaz diverted 30 million dollars of emergency funding provided by the Biden Administration’s stimulus bill to spend on a desperate national advertising campaign pandering to tourists to come to NYC.

At least one person has finally decided to back up the weakened comptroller and that’s the incoming one that is bound to take is place; Brooklyn Councilman and well renowned Brad Lscofflaw parking speed demon Brad Lander tweeted in solidarity in support for his lawsuit and demanded the mayor restore control over the city budget back to the Comptroller’s office. Even though Lander and his fauxgressive City Council Cronies never said a word or did a fucking thing while the Blaz was abusing his emergency powers and pushing his pay to play derived doling of city services to his overlord donors.

But Brad Pander’s demand exposes not only political expediency but also desperation, because if he and Eric Adams wins and the pandemic is still around, Adams will just cite the Blaz’s exploitation of emergency powers as legal precedence and make his job moot as well, leaving Lander as another feckless simp to walk on top on.

So unless Stringer can dredge something feasibly criminal against the Blaz, he’s pretty much going to be sitting on his taint for the rest of 2021 as his emergency powered emboldened nemesis continues his hedonistic spending, platitude/selfie tweeting and food consuming mayoral staycation and blissfully continue to still treat the Comptroller’s office like doesn’t exist.