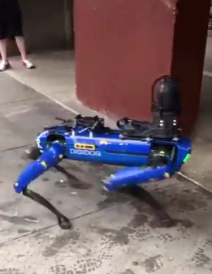 As if the citizens of New York City haven’t went through enough during this pandemic, especially now that we all don’t know when more vaccines will be coming and where COVID and it’s variants may be settling, and with more protests happening with recent national news making incidents of cops using excessive force, Mayor de Blasio’s NYPD has been finding the time to unleash  their brand new militaristic droid puppy, Digidog to the streets and in this case, public housing buildings.

And the people that witnessed this here at this Kips Bay NYCHA building reacted with awe and shock. And concerned folks on social media immediately conjured up a legendary episode of Black Mirror featuring a robot canine with extrajudicial homicidal tendencies.

By the time my kids are old enough to watch Black Mirror it’s going to be a documentary series https://t.co/7ehZctlz0i

And of course there were the usual exhortations of the NYPD wasting tax dollars on more militarization and surveillance as safety net programs and essential services for the poor continues to get shafted.

This happened. It’s over now and nobody was hurt. People are suffering here under RAD/PACT. We still fall under ⁦@NYCHA⁩ and we matter. Nobody is listening. ⁦@NYCMayor⁩ ⁦@SDNYnews⁩ pic.twitter.com/B2fTdCUdwl

Mayor de Blasio, who is basically, no actually the boss of the NYPD, feigned ignorance when he was asked about this dystopian exhibition by his police forces and gave his atypical disingenuous response and let a little sly smug smirk slip in his promise to have a look at the video and get in touch with Commissioner Shea about it.

de Blasio’s incriminates himself here because he had plenty of time to catch this 2 minute video of the still unnamed Digidog trotting into and out of the NYCHA building, about 10 hours worth to be precise, plus the account that showed the video tagged his City Hall account.  And it wasn’t like he wasn’t on the twitter to not see it, because The Blaz (and probably one of his two dozen aides) is always quick to virtue signal something in the hopes of getting news attention.

But let’s not beat around the bush here, because while Commissioner Shea is in charge of running the biggest local police force in the nation and the world, The Blaz, being the notorious micro manager, is still the boss of NYC. It should be no doubt that he permitted the funding to buy this droid and gave the Commish and the Squad commanders the go ahead to use it. And this is the second time the mutt has been used for emergency calls, but the first time that it was actually brought inside a residential building.

When this incident got viral and then local corporate news attention (as well as national), a security consultant praised while feebly defended the NYPD’s handling of the robot and revealed some disturbing capabilities of the Digidog’s functions:

Monday afternoon at 344 East 28th Street, cops responded to a man barricaded after a domestic dispute.

Sadly, it’s an all-too-common situation, but it drew attention.

It was one of the first times the public has seen the new NYPD digidog, bristling with cameras and microphones. It’s able to approach danger and feed back live pictures and sound.

This may be why Ms. Auciello tagged the Southern District Court of N.Y. account to see if de Blasio’s NYPD skirted some constitutional violations.

“It allows them to really put a plan together, to get eyes in there without putting a human body in there,” he told CBS2’s Tony Aiello. “Really gives you that real-time intel that is so critical to any scene like that.”

He believes technology such as digidog can save lives and money.

“There’s gonna be instances where they’re gonna be able to determine that the person’s not in the residence, so a seven-hour standoff might be now 90 minutes. There’s savings there,”‘ he said.

According to this unwarranted surveillance monger, the digimutt will be a real game changer in situations where civilians are in danger and the potential of dangers to cops if the perps they are investigating are armed. Besides you’re not going to know if your 4th amendment constitutional rights are not being violated if the digidog cameras can peek and eavesdrops through your door. And it won’t be a big deal if it’s equipped with facial recognition technology when it stares you down with it’s camera eyes as it trots right by you.

To quell all this speculation and justified paranoia, de Blasio’s NYPD made sure to stress that the digidog was not used during the investigation of the domestic dispute at the apartment and was only on standby. But why fucking bring it in the first place as well as the overdeployment for one guy who had no reported weapon? The answer might have been to see how it can walk a beat and recognize everything and everyone in it’s path. Like how it exited the NYCHA building and stared at everyone that was gawking at the city’s police surveillance state wonderdog. 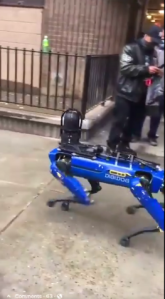 This is only the beginning. For all we know, there might be more of these fucking droids coming down the pike thanks to President Biden’s stimulus funding and also with protests that are sure to come up during the summer and de Blasio and Shea would want to get more of these little buggers following demonstrators around and grabbing their features and logistics. It’s uncertain if the NYPD’s Dynomutt is going to do anything about the widespread crime  that is raging from gang warfare and attacks from  mentally ill people prone to violence wandering around on the streets.

Mostly it’s just another annoying distraction from the troubled recovery for all of us here in New York City, albeit one that will probably fundamentally change how we think about our liberties and the safety the NYPD thinks the citizenry should sacrifice them for.