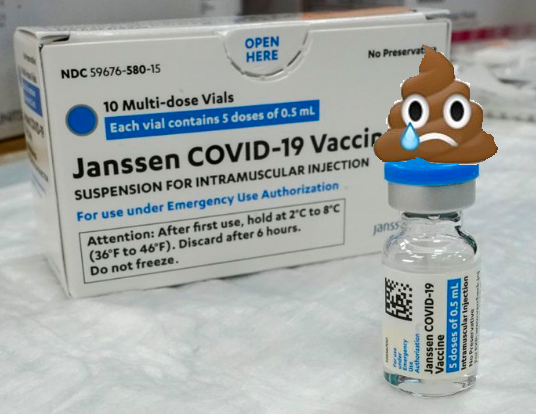 Federal health agencies will temporarily stop using Johnson & Johnson’s one-dose vaccine after six women developed blood clots, including one who died, according to officials and a new report Tuesday.

The Food and Drug Adminstration announced the pause, saying there’ve been a half-dozen reports of a “rare & severe type of blood clot” in patients who received the vaccine.

The clots were observed along with reduced platelet counts, making the usual treatment for blood clots — the blood thinner heparin — potentially “dangerous.”

“Right now, these adverse events appear to be extremely rare,” the agency tweeted in a joint statement with the Centers for Disease Control and Prevention.

Those affected were six women, between the ages of 18 and 48, who developed the clots within about two weeks of vaccination, the New York Times reported.

One died and a second in Nebraska was hospitalized in critical condition.

People who received the J&J vaccine who are experiencing severe headache, abdominal pain, leg pain or shortness of breath within three weeks after receiving the jab are advised to contact their health care provider.

The feds hope the pause will serve as a strong signal to states to do the same.

“We are recommending a pause in the use of this vaccine out of an abundance of caution,” the FDA said. “Treatment of this specific type of blood clot is different from the treatment that might typically be administered.”

Isn’t that just fucking dandy. But is it really so stunning on why that so many problems have happened so fast since this vac was rolled out only over a month ago? Although it’s sure seems that way because government officials are trying so desperately to end this pandemic and the new normal lifestyles of masks and distancing we are still living in despite the amount of people inoculated so far. It was sure a feat to be able to convince the general public that a vaccine that was 30% less effective to fight COVID than the Pfizer and Moderna was just as safe, giving the public the impression that the single jab will do the job of the documented superior products that were first fast tracked and rolled out.

Too bad J & J didn’t live up to the hype,as proven in the most recent tale of two inoculations in two towns in Brooklyn. A pretty White lady from upscale Williamsburg managed to get the J&J on the first day it showed up at the Javits Center (even though being 30 years old, she wasn’t eligible yet) and after going upstate and spending some minutes riding an escalator at a Target by Atlantic Yards/Pacific Park, she got the symptoms and got COVID again anyway. A few days later, a 39-year-old man from Bath Beach got COVID positive while working only a few weeks after he got the J & J from a site in East New York and he decided to get it because of the convenience and now regrets not waiting for the Pfizer or Moderna vacs to become available.

And why is that? Because these two people, who at their ages are most susceptible to the variants because of their capability to infect, believed that the best vaccine is not the one that is available, as recommended by NYC’s doctor and health commissioner Dave Chokshi, who himself did not get vaccinated when the first two vaccines were out despite his line of work and how he’s around people working in person indoors and then got infected with COVID. After recovering, he got the J& J.  But what kind of health commissioner gets infected with a disease he’s supposed to advise everyone from avoiding? An idiot that’s what.

But it’s not entirely his fault because he works and is a willful toady for the idiot Mayor Bill de Blasio, who has been wholly dependent on the shitty J & J vaccine for months and has opened up dozens of vac sites in order to fulfill his “recovery for all of us” mission to bring arts and culture back to NYC and for people to get immune to the contagion in that order, notably one site only dedicated to Broadway and a mobile unit to serve off-Broadway entertainment. Even resorting to malfeasance to make the recovery of reality. Knowing the weakness of the JJ vac, it would have been more apt if the inoculations were given in 99 cent stores or Dollar Trees.

And now we got a national quagmire after these shit vaccines gave 6 women blood clots  and killed one of them. Even though medical experts and elected officials are saying that these are rare symptoms after getting the shots, the CDC has ordered to suspend distribution of the JJ vacs indefinitely, which will no doubt discourage people from getting them in the future if they are revived, no matter they say.

Although the consensus opinion and inevitable rejection about the inferior JJ vaccine should have been set in stone after the warehouse were they were being manufactured botched 15 million doses when another brand vaccine got mixed up in the formulating during production. It also was revealed that factory in Baltimore was not even FDA approved for manufacturing and had multiple violations prior to being awarded the contract from Joe Biden’s DPA order, which confirms his initiative and lofty goals to vaccinate the nation in record time has been a failure too.

If there is any profound lesson or anecdote from about JJ’s shitty vaccine, the most insightful take came from Mike Lupica shooting from his lip in his weekly NY Daily News column:

That’s right, and the Jets have been one of the worst teams of the past decade too since they took bought it from the Hess oil company. But at least improving a football team with an energetic new coach and high draft pick quarterback doesn’t take much science to do it. But a Big Pharma company like them should have came out with a more efficacious vaccines than the shit one they put out and will now be thrown in the garbage. And with this disaster, the freedom from masks and normalcy’s return will still be out of reach, leaving this nation’s health and future in more doubt as a two year old still continues it’s omniscient dominance over society.

This really should have been expected. But in retrospect, this vaccine should have never been approved at all.