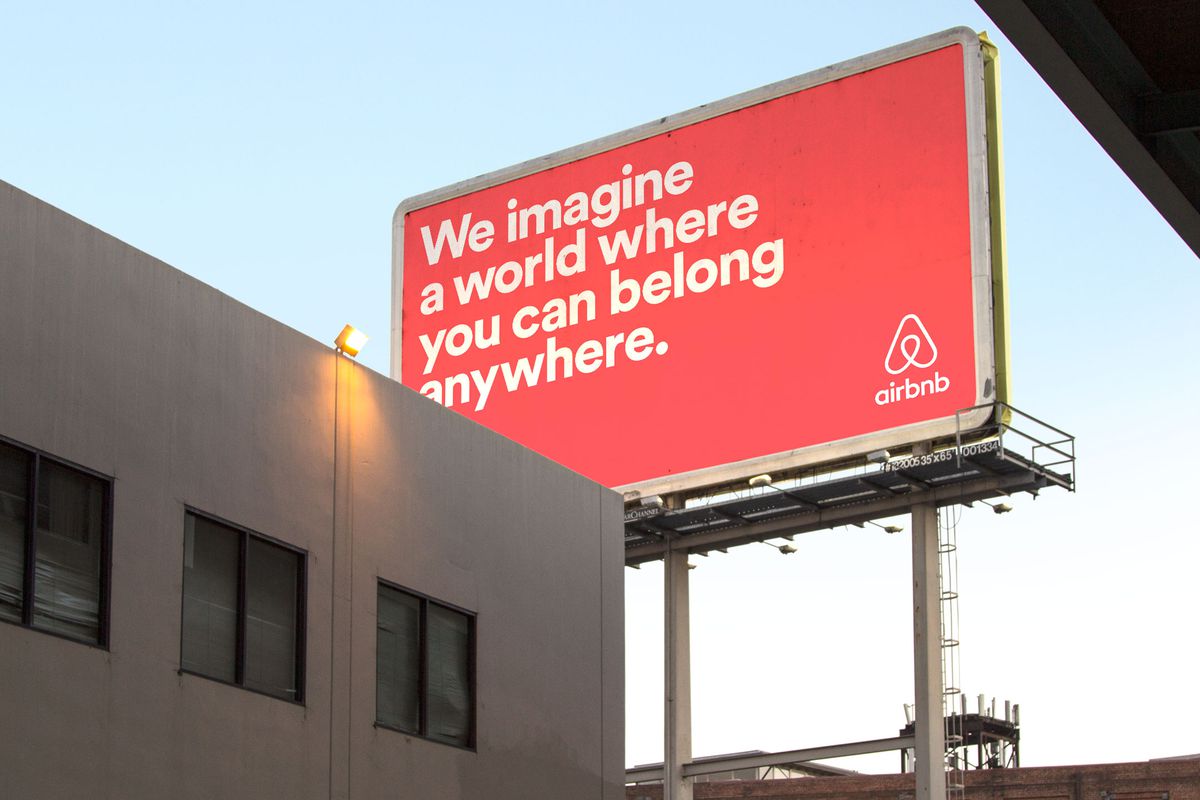 Ad slogan unintentionally includes the streets and subways and bland innuendo towards the poor and middle class communities apparently.

“A House Is Not A Motel”

The day is coming when City Council will finally take on one of the sharing economies cancer Goliath, the room rental company Airbnb with long overdue regulations and penalties for it’s participation in the influential effects of rising and overvalued rents, in gentrifying neighborhoods and for the dwindling stock of available and bare existence of affordable housing.

Even though the damage has already been done on a massive scale, being that this tech company has already made billions from their usurpation of living in the city year round and these councilmen and women natural habit of reacting too late for everything as with the app-based car services that they ignored. But at least it’s something to start with. And the avaricious beings behind Airbnb don’t like one bit as they continue to lobby in hypocritical vain to keep the status quo and continue to profit off their basically illegal and criminally advantageous business model, like trying to come off all populist by accusing the hotel industry which they are trying to destroy of swaying and controlling council members and harping about how middle class homeowners use their service to survive financially in this overvalued city that Airbnb themselves had a hand in their current struggles being that the now concerned multi-billion dollar startup led to a amount of over $600 million dollars allocated from the rental hikes and livelihood costs on tenants.

It still doesn’t and damn well shouldn’t absolve this overvalued as well hospitality app corporation. Since being exposed for a suspicious anomaly in a data report about their hosts Airbnb submitted to this city, more and more criminal behavior has arisen about the lengths hosts will go to acquire extra cash to quote “to make ends meet”.

Most recently two derelict hosts took this too an absurd and lunatic level. Last week, a landlord who owns 4 other apartment buildings and was listed as one of the 100 worst landlords in NYC, rented out a kitchen for lodging in the same former two bedroom and likely rent stabilized apartment where 5 other rooms were being used through Airbnb.

And some imbecile host from Corona, Queens turned their 2 floor home above a storefront into a flophouse NY Hilton complete with cheap partitions and bunk beds and placed tents with air-mattresses in the backyard. Which was able to house forty people a night there and outside. One hostess regularly squeezed 34 lodgers in a “beautiful” apartment building in the formerly working class neighborhood of Bushwick, which was one of the top neighborhoods listed on Airbnb abuse.

The list of other illegitimate listings produced through the app are outstanding. Some earlier standout sleazy ones come to mind like a wretched couple profiting off their city provided affordable housing apartment to rent to gullible vacationers and some sleazy douche renting out parked vans for lodging in the streets of Greenpoint, Brooklyn where guests had to use the city parks bathrooms to bathe or thoroughly wipe themselves.

Then there a swath of apartment buildings run by unethical landlords and the mysterious partners of LLC’s for providing lodging to a demographic and travelers who can’t afford or are to cheap to stay in a hotel and motel. The most notable host might be Mayor de Blasio’s former campaign contributor Jona Rechnitz who was able to run his own illegal hotel in a building he owned on Madison Avenue even after getting caught and fined as the mayor waved off later D.O.B. investigations, enabling Jona’s blatant scam to continue using Airbnb as a criminal enterprise to demand more cash donations from him to supplement de Faustio’s political interests involving his flawed agenda and upstate N.Y. senate seats.

Rechnitz continued to break the law because of his association with the morally bankrupt and money-grubbing mayor, but the fines dispensed to various other individual landlords, brokers, and LLC’s using airbnb for their buildings to enrich themselves were barely enough to put a scare in these repeat offenders.

And what can be described as an advocate for Airbnb taped professional looking fliers inside the halls of the Ebbets Field Houses looking to recruit hosts in addition to encouraging tenants to keep their apartments in their name, despite it being a crime to use city funded and rent-stabilized apartments as a business.

And now comes the embarrassing yet not surprising news, that the home-sharing app is being manipulated for money laundering through stolen credit card information by nasty Russian cybercriminals often times conspiring with actual but corrupt Airbnb hosts. The sharing economy app was also illicitly exploited by one month Trump presidential campaign Paul “Mumbles” Manafort.

As a recently unsealed indictment against former Trump campaign manager Paul Manafort showed, not even Airbnb is safe from money launderers. But Manafort isn’t the only one allegedly funneling dirty money through the mega-popular accommodation service. Scammers are leveraging Airbnb to launder dirty cash from stolen credit cards, according to posts on underground forums and cybersecurity researchers consulted by The Daily Beast.

“People [have] been doing it forever,” one current and experienced credit-card scammer told The Daily Beast.

The Daily Beast found a number of recent posts on several Russian-language crime forums, in which users were looking for people to collaborate with to abuse Airbnb’s service. According to Rick Holland, VP of strategy from cybersecurity firm Digital Shadows, these operations rely on an individual or group using legitimate or stolen Airbnb accounts to request bookings and make payments to their collaborating Airbnb host. The host then sends back a percentage of the profits, despite no one staying in the property.

In essence, it’s a way to extract value out of stolen credit cards. In another case, fraudsters might buy electronic goods such as iPhones with stolen cards to then resell at a profit. This is the same idea of laundering funds, just with Airbnb.

“The money is 50/50,” one apparent scammer wrote on a Russian crime forum in August. “You receive the money within two days after the booking date,” it continues, and adds that there are “story-telling hosts” ready, likely referring to hosts who are in on the laundering.

Another poster on the same forum says they are looking for “hosts for cooperation,” and a third implies they will launder the funds specifically through Russian hosts who already have reviews on Airbnb.

When a customer stays at a host’s property, the customer is encouraged to leave a review, so other potential vacationers, and perhaps Airbnb, can know if the host is legitimate. The scammers appear to circumvent that protection by, in some cases, using real but corrupt hosts.

Since it’s inception at the start of his decade, Airbnb usage has permeated households and apartment rentals with the effect of a serial killer. It’s impact felt on metropolitan cities like their home San Francisco, Los Angeles, Seattle, and New Orleans and international cities like Barcelona, London, Florence, Berlin, Paris and Signapore. The latter two cities have brought up aggressive bills to prevent the scourge of opportunistic unethical hosts. Following a protest at Airbnb headquarters, a proposition to protect tenants rights to fight eviction attempts from predatory landlords and to restrict short-term rentals won decisively in San Francisco.

Airbnb’s reassuring press releases about their purported security standards get less credible every day. It may be because they are busy counting their billions to worry or care about neighborhoods getting decimated, people getting kicked out because of the high rents that their immoral and greedy hosts have caused. Despite all their technical expertise, they still don’t diligently vet their hosts (unless they are black).

Airbnb is a shitty business model to begin with. But are fortunate that most of their customers are young and stupid and living beyond their means. And a large percentage of them don’t seem to mind bunking with 20 others in a cramped apartment or sleeping in a bag on the floor. And their most successful money earning hosts are bereft of morals and consumed with greed. Most importantly, Airbnb is just another peer-to-peer service and are not wholly responsible for the actions of their rogue hosts.

But Airbnb has definitely impacted cities for the worse and society as a whole. There is just too much crooked recidivist activity involving this company to be considered a legitimate business.

But if there is case against the defendant Airbnb and their inability and incompetence to vet their hosts and their total disassociation of the communities concerns and cities as a whole, the best may be when State Asssemblywoman of Manhattan Linda Rosenthal posed as a guest looking for rooms to dwell in and every host she encountered in her district did not even recognize her and advised her not to tell anyone it’s an Airbnb, which is actually standard procedure for every other building being abused for vacation lodging over renting.

Unfortunately for Assemblywoman Rosenthal, Big Bad Bill de Blasio was already bought by the house share tech behemoth, which explains how all this brazen criminal app activity was able to fester. As if Airbnb making a video congratulating the mayor wasn’t enough of a conviction.

These few examples above doesn’t even scratch the surface of the offenses committed via this 30 billion dollar industry. And like a recidivist petty crook, their app continues to be used malignantly and Airbnb doesn’t have the capability or will to stop it and there will be more stories like this to come, for their aforementioned inabilities stabilizes their wretched bottom line and is the basis for their ill-gotten gains and Wall St. determined and inflated worth. And will lead to more citizens of cities struggling to get a roof over their heads and tenants dealing with strangers shuffling in and out of their buildings every day.