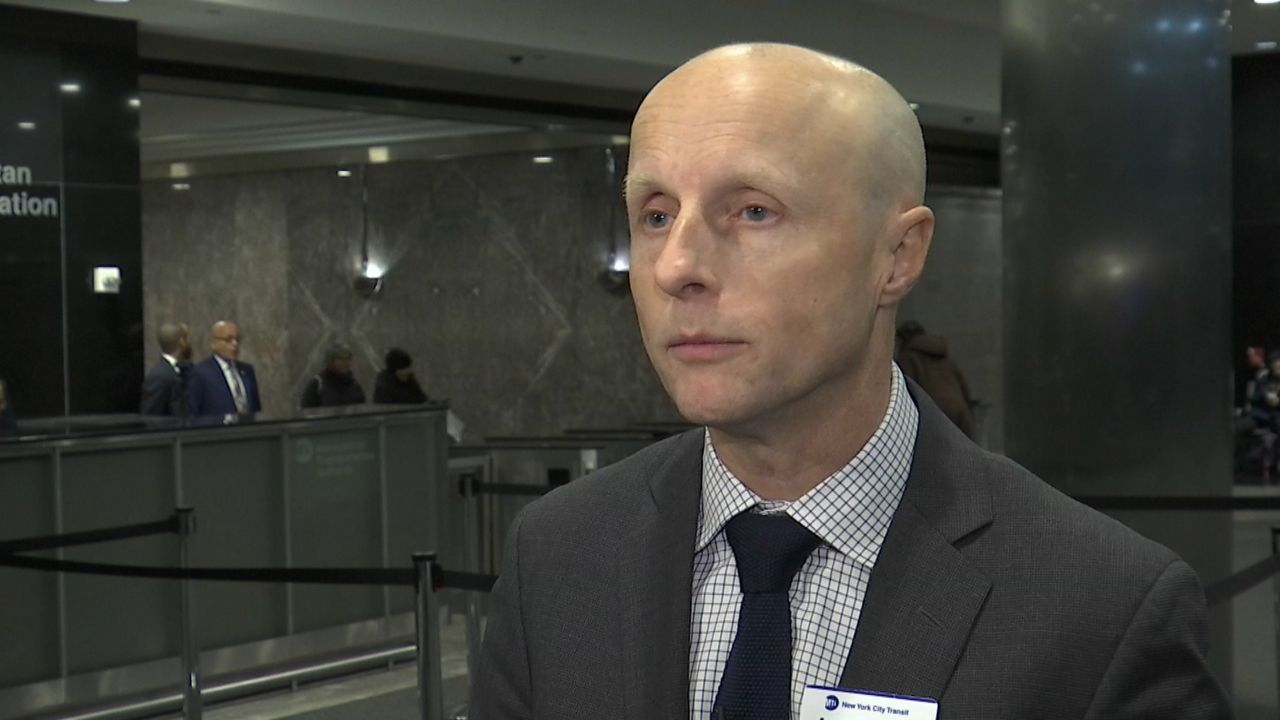 Andy Byford and that moment of clarity he abandoned to take the reins of the MTA, the worst fucking transit system of the universe.

Andy Byford may have just realized he is in way over his head and out of his league in his well-paid state service leadership position (yeah it’s redundant, I’m writing about the MTA again so fuck off).

President Byford is trying really hard though. He did come up with that budget study assessing that it would take $37 billion dollars to overhaul the mega-shitshow mass transit system, despite having no current idea or plan how to pay for it. I mean, he is not a bad bloke, he kind of resembles a mixture of Moby and Thom Yorke and he is a big fan of legendary new wave band The Smiths, so big that he thought it was prudent to mention and discuss fave tracks by them during a live social media style town hall with frustrated commuters complaining about consistent shitty service a while back (my personal fave by the way, is the WLIR extended remix of “This Charming Man”), but at least he has been apparently honest and straightforward.

But with recent incidents unfortunate and even optically progressive, he’s starting to sound like and resemble a harrowed Karl Pilkington, trying to cajole and persuade the public that their commutes will be fine in light and in spite of delays, dubious improvements, and potential and real time infrastructure hazards. In which all three occurred at once at Borough Hall one lazy afternoon.

The Borough Hall station, which serves the 4 and 5 express trains, had a giant slab of plaster and concrete from the platform’s ceiling collapse on a woman, whose life was spared by the dangling lamp above. This station, which is one stop away from the gloriously renovated Atlantic Avenue Station thanks to the existence of the Barclays Arena and was visited by gubernatorial longshot candidate Cynthia Nixon on June 1, has been going through it’s own purgatory-like state of neglect by the MTA that makes the five year (but scheduled for three) upgrade at the Lefferts Blvd. Station look almost punctual and efficient by comparison.

President Byford showed up with his safety vest and his expertise and pointing his fingers at the obvious problem made clear by the exposed brick and ribar displayed above and stating that “There is evidence of water ingress. You’ve got a bit of paint peeling,” (a bit?) and “This is a very old station, at the end of the day, but we will get to the bottom of what happened.” I guess it’s a good display of transparency, but sandwiching that wretched cliche “at the end of the day”?  What the fuck you need to say that for, Andy? Really failed to reassure and salve the public there. Although it’s hard to really do damage control when the damage is a big pile of jagged plaster lying on the platform.

The woman assaulted by the MTA’s neglect made a great point how she could have been killed, but also how fortunate that it was 3:30 in the afternoon, a few hours before rush hour and school is out for summer, because certainly a group of kids would have got killed or injured at that moment.

In spite, or maybe more like passive indifference towards social media sharing by commuters and solid reporting by the now digital Village Voice, the MTA’s approach for maintaining this station has been quite an embarrassment. For all the cosmetic improvements that have graced certain stations, this is what one of the station entrances looks like a few months ago:

Speaking of such station cosmetic improvements, I mean, errrr enhancements, Byford even got a little defensive and testy trying to explain the admirably swift completion of two elevated stations in Astoria featuring more art, windowed walls, aesthetically pleasing benches, wifi and usb ports. although it also has the obligatory fuckup with a low hanging destination sign that a commuter bonked his head on.

“Don’t be fooled by the beautiful artwork and cosmetic nature,” Byford said. “These were fundamental, deep-rooted repairs that we made to the underlying fabric of the station. It’s very important.”

Surprisingly, Andy was not the slightest sussed by the utter absence of an elevator at these new decorative stations, again denying the handicapped, elderly and mothers and children in baby strollers for safe egress. A necessity that was previously a crucial concern for the overburdened transit president in his previous job in Toronto.

But the worst gaffe to come from the president’s mouth in his myriad efforts to spin these issues and pathetic attempts at damage control may have been what he said just days before the Borough Hall ceiling collapse. Andy Byford, your humble transparent public servant, believes that the presence of overcrowding does not effect the slow service of the trains. And he is/they are going to eradicate this debilitating and growing contribution in future transit reports.

This is an interesting development as well as a demented irony being that the only overhauling being done at the MTA is re-categorizing reasons and origins for horrible service, which they did rather deftly when they previously blamed it on Con Ed. Something is afoot here. Although the passengers only offense is actually paying $2.75 for crappy service and not for the notorious pace of and indifference to essential repairs to the system, most likely the tracks, the singles and now the ceilings, it is undeniable that overpopulation from the amount of people that have moved to this city and the relentless yearly amount of tourists has had a massive effect. Especially and most devastatingly on the stations in the boroughs of Queens and Brooklyn closest to Manhattan and in the metropolis itself.

Here’s proof, this photo was taken on the A train while between the Jay St. and Hoyt St. stops, and there was barely even a delay

This is the result when the train is late for less than 2 minutes. The capacity for trains at the end of the day like the F going to Brooklyn, the E going to Queens and the 6 in Manhattan, the latter a fucking local train, is where it’s actually like sardines in a crushed box and it’s in areas where the most and highest tower development pestilence has occurred. And then there is the fucking L train to northeast and central goddamn Brooklyn, where airbnb and other moronic app-based room rentals are consuming dwellings where regular folks with common sense used to occupy and definitely in buildings owned by LLCs’ where one room apartments were converted to two rooms by predatory landlords, packing in more dumb frivolous spending bodies. It makes it easy to cynically assume that perhaps the cabal/pogrom/overlords of the Real Estate Board Of New York might have had an influence in Andy’s decision (as they do with every other fucking thing to make the city impossible to afford and run your own business) to exempt the moneyed, condo-owning and arrested development types in their 20’s and 30’s overpopulation of this city from being partly responsible for these delays.

Speaking of these demographics, these people are the worst violators of commuting with their eyes constantly averted down and fingers relentlessly tapping their phone screens as they are entering the train, blocking the doors and even exiting and entering the station. And they also crowd into the cars nearest their exits at their stop, leaving everyone completely fucked as they are not able to board because of the crush of the bodies concentrated as the doors open and shut. 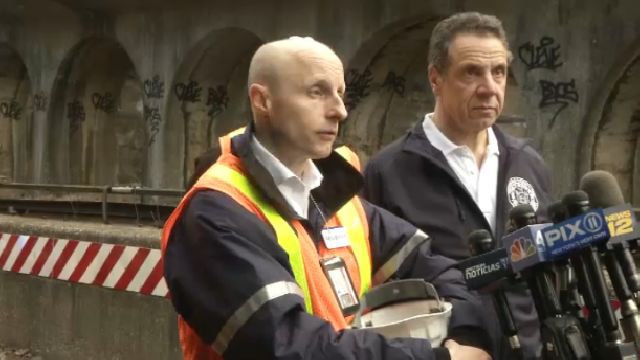 The Andys. The disappointed and the overwhelmed but still arrogant.

But what else can Andy do, the poor sod. He’s only been here barely a year and he is wracking his brain trying to fix the MTA and over a half century of incompetence, profligacy and neglect and the ramifications which seem to be manifesting all at the same time. It would have been nice to have Andy around when the MTA gave Forest City Ratner a big ass gift with their knuckleheaded sale of the Atlantic Transit Yard a decade and a half ago.

And it must be thrilling to wonder what’s going on in Andy’s mind now that these very  ramifications resulting from said profligacy by the other Andy, Governor Cuomo with his decision to accelerate the first half of the 2nd Ave Line for his New Year’s Eve party along with the 7 train extension to the Blade Runner development Hudson Yards and the billion dollar one-stop Metro-North extension to Grand Central from Penn Station. And how even the new aesthetic masonry of Penn Station and even the 2nd Ave line are starting to show cracks and debilitation. And don’t forget all those tech inspired enhancements! And the Kusciusko Bridge laser light shows!

There are many, many more that can be sited for the reason that the Borough Hall station looks like and has got the same maltreatment as a NYCHA apartment. But it’s clear that Andy Byford, admirable and courageous that he is to take on the worst fucking transit system in the universe, is not going to last long in this town despite putting up a brave front. So maybe it’s best if he just walks away and leaves it for another man or woman to deal with this festering shitshow.

There’s too much to handle, too much money that’s not available, too much bullshit, too much pain. Just walk away Andy. It’s really not worth it. This subway will never be fixed in our lifetimes and will barely be there in the future. Sorry about this fatalistic and bleak prognosis, but this is the reality all these rich, educated derelicts responsible for it have created.

If you haven’t figured it out Mr. President or are just a trusting nice guy; the MTA held off on repairing the Canarsie Tunnel right after Sandy hit because it would have interfered with the continuing gentrification and luxurification of Williamsburg, Greenpoint and the cancerous creep into Bushwick. If the tunnel was repaired like it should have been, if the MTA showed any responsability and common sense and got it enhanced, every stupid hipster and yuppie would have moved out of those aforementioned towns and the real estate magnates would have never built or bought anything and the rental and housing market wouldn’t be insanely overvalued and inflated like it is now for them to heinously profit from.

Besides, you don’t wanna be around when the L shuts down in 10 months (10 minutes to midnight ha!), because there is no fucking plan for it. I don’t think you even have one. Just admit it, believe me you’re definitely not alone. No. One. Has. A. Fucking. Clue.

One thought on “Just Walk Away From The MTA, Transit President Andy Byford”