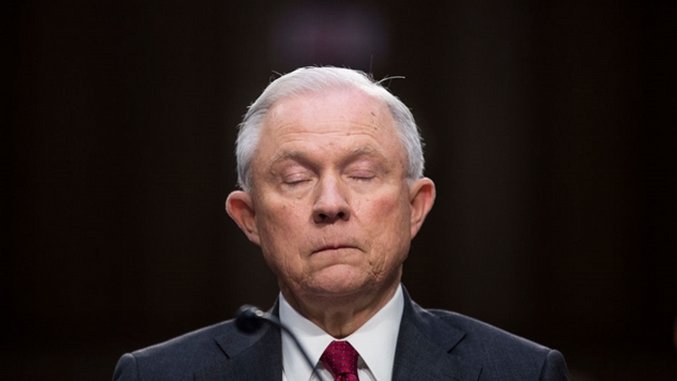 The attorney general of the United States Of America, Jeff Sessions, has taken upon himself only to order the feds, local police and marshalls across the nation to continue persecuting marijuana cultivation, dealing and possession in a fascist dumbass response to the recent legalization of the divine weed in California.

It is not at all an exagerration that this is an outright vigilante mission now and the last pathetic desperate attempt to justify and fund the almost 100 year drug war, which has reached an asinine new level recently with a raid of a house party in Baltimore that led to the arrest of over 60 people for possession of less than an ounce of pot.

Sessions, the “Schwag” of appointed officials in the administration of Figurehead Trump (who thinks the A.G. is his personal lawyer), must have an inkling that his time as A.G. is limited and going to, well, pot. His declaration and demands are absurd and baseless. Over 3/4 of the nation has decriminalized the recreational use and possession and permitted the medicinal usage and distribution. Nationwide polls have resulted in high percentage demand for it’s full legalization.

But A.G. Schwag Sessions doesn’t care, for there are all those privatized prisons that need to be filled constantly so they can reap financially, like those run by the GEO group and Corecivic which Jeff and other establishment politicians have investments in and who have invested so much cash getting Trump to the White House so he can watch T.V. and text all day like a coddled 12-year-old brat.

Sessions might be also in panic mode because he must see the tide turning and those aforementioned uncomfortable facts that surely will lead to total national legalization. His status is also shit because of the Mueller investigation and the recent blockbuster book on his boss Trump will accelerate his irrelevance.

States will surely laugh this off, for Sessions is doing a complete overreach of his position, as is the new tradition now established by the wannabe autocrat dotard. If anything, all you have to do is look at Colorado and how the state has done outstandingly well since legalizing the weed. Sessions stupid regressive decision is not only an irresponsible oppression of states rights but is a business and jobs killer.

All states should get with the program and start drawing up legislation to make the glorious weed accessible without reprisal. It is preposterous with all the legislation to get this legalized, it’s still federally stated that pot is just as bad or worse than cocaine or heroin. Even more ridiculous is it’s still called a gateway drug (which in fact, are cigarettes and alcohol). If any state should get this started it should be New York, but Mario’s son somehow neglected to include legalizing marijuana in his so-called aggressive progressive state of the state address. Dumbass.

Hopefully, Jeff’s effort to goad police across the nation to return to SWAT-like break-ins and entrapment tactics for a fucking joint will fall on deaf ears, though these things are still continuing. This is going to take more protests but more essential way more effort by elected officials to thwart this invasion on Americans personal choices.