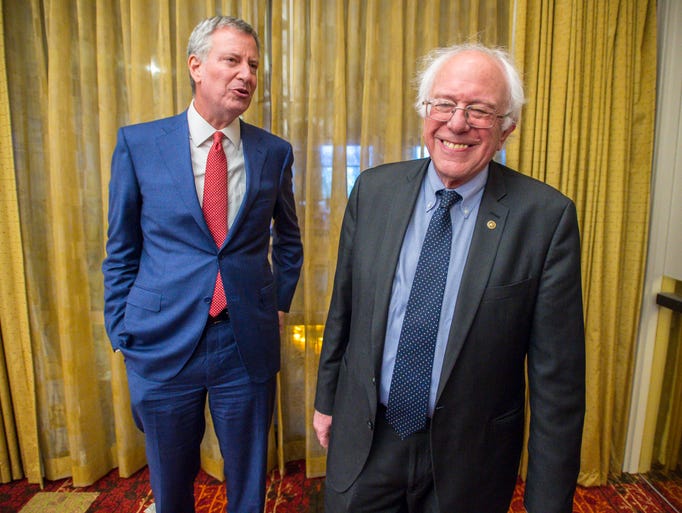 It is with great alarm and displeasure that you have chosen to appear at the inauguration of the second term of Mayor Bill de Blasio. For this elected official is the antithetical embodiment of what you and the movement you inspired last year.

You have mentioned and further informed the nation’s citizenry the pernicious influence of money in politics and you are going to commemorate a person who has accepted massive donor cash from the real estate industry in this city with open arms. I’m not even referring to what he accrued when he was campaigning before winning the election but a P.A.C. he was running in city hall as mayor called the Campaign For One New York. He used this on the premise to promote Pre-K and affordable housing, but it was actually just a slush fund to bolster senate races for candidates upstate that wound up losing.  You have mentioned the pernicious influence of lobbyists hired by corporations to shape zoning laws and civic services in their favor and this mayor allowed lobbyists to attend meetings involving city planning. Giving this collective instant access not easily available for the average constituent. Pay to play politicking hasn’t been this criminal and blatant since the early and mid-1980’s and in over a century since Tammany Hall.

You have illustrated how transparency is essential for government to function but this mayor makes it intentionally difficult to access his emails and shows absolute contempt for the press by refusing to answer questions that deviate from the narrative he zealously tries to control.

Mayor de Blasio in just the last few weeks since winning has seen a ghastly scandal involving the public housing organization NYCHA and their commissioner lying to HUD about annual inspections of lead contamination in the apartments and this mayor has staunchly continued to back her and was caught in a lie about not knowing about the cover up. In a current lawsuit filed by the tenants, de Blasio recently ordered his tax-payer funded city lawyers to get his name off the case after proclaiming leadership and responsibility for the running of the housing authority. As of right now, the egregious negligence by NYCHA is reaching criminal proportions, and this mayor is downplaying this like Trump downplayed the deceased body count after Maria hit Puerto Rico.

It’s perplexing why you feel the need to support and hail someone of such duplicitous nature, Senator Sanders. Especially in your overmatched battle with the current president, Donald Trump and your donor reliant peers in Congress. For this mayor is using the same tactics and relying on the same sources to support and finance his agenda. An agenda that is not progressive at all despite what it seems and all the right things that are said to mollify his base.

Under this mayor, homelessness has risen partly resulting from displacement by being unable to afford the rising rents that his real estate donors are responsible for. His affordable housing plan has zero credulity being that it’s not affordable and there is a scant amount of it.

Why you would come all this way to praise this mayor is confusing. If this mayor really wanted to stop Trump from winning the election, why didn’t he dedicate his support to you in the first place, Senator? Why did he straddle the fence and support your opponent Hillary, even though she wasn’t enthusiastic for his support according to the released e-mails?

This mayor is not to be trusted, Senator Sanders. He is not the one to lead the new progressive movement nor the resistance, which has now dwindled to a nub  because of your colleagues feeble efforts and it’s distracting attention to unfounded election meddling. It would be better to use your holiday recess somewhere else than showing up at an event for this mayor, who only won with 14% of registered voters. A dubious victory and testimony to how jaded and cynical the city’s constituency has become.

Senator Sanders, if you show up for this unworthy inauguration, you yourself will be marred with the same skepticism and distrust by the public (the ones that are more informed anyway), mostly by the people that supported you and still do. Which can’t get anymore worse considering the wretched political climate the nation is going through now. And this mayor is a massive and blatant example of what’s obviously wrong with government these days.

Most of all, Senator Sanders, and if it’s a bit simplistic, this mayor is a liar. Just like Donald Trump and just as equally unsophisticated and blatant. Like Trump, he also rules like an autocrat and is vindictive towards his critics. This mayor is also a supreme incompetent as education, child services and transportation have all gone downhill under him also.

Let one of his agents of the city, like Jon Rosen or James Capalino introduce him, for they have benefited more individually than anyone else sans the neo-Trump real estate magnates running this city via this mayor. Hell, the perfect tool would be his money grubbing au pair Ross Offinger.

Please, I implore you Senator Sanders. Avoid this inauguration, de Blasio is a pariah in this town. I assure you are going to lose a lot of your base nationally when they get wind of this and it would be a colossal waste of all that effort and support you built last year and currently continue to maintain.

It’s not too late. Just walk away from this mayor.

One thought on “Open Letter To The Most Popular Politician In The Nation Bernie Sanders: Stay Away From Bill De Blasio”