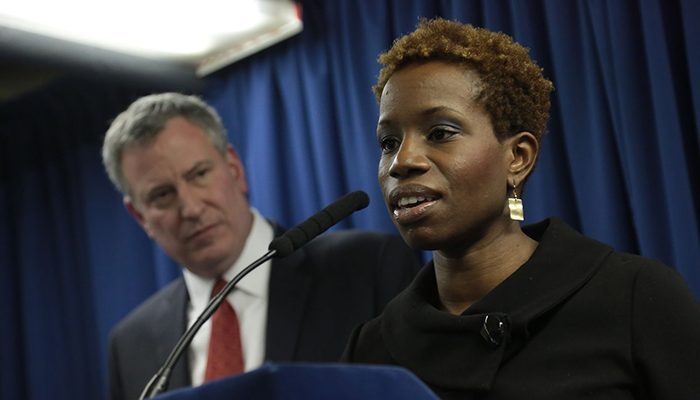 Shola Olatoye, the commissioner of NYCHA, the real affordable housing program, has been exposed of lying to the city and federal officials for the avoidance of mandatory lead testing in various project apartment buildings and the obfuscation of information about the status of the inspections.

In the last 3 years since appointed by Mayor Bill de Blasio and optimistically promising accountability and better service for the 400,000 tenants of the buildings in an op-ed in the NY Daily News, she compromised the safety of them by being willfully deceitful along with her deputy staffers in a conspiracy of obfuscation and neglect.

And now it includes the recently re-elected mandate claiming mayor. For after initially acknowledging the damning D.O.I. report for the egregious behavior and his unwavering support for his appointed commissioner delivered through the mouth of one of his numerous spokespersons since he is currently on paid leave in Connecticut with his wife, his spokesperson cavalierly revealed that the mayor previously knew all along that Commissioner Shola and her NYCHA underlings avoided their responsibilities and lied to H.U.D. about their mandatory appointed duty to their tenants.

For with this vile discrepancy, Shola lied to the federal agency and was aided and abetted by the Mayor of New York City when she sent in a form which she notarized certifying that inspections went on as scheduled. Fostering and continuing decades of systemic futility of the federal, state and local government funded program to help the under-payed and unprivileged with safe secure homes.

More importantly, a vast majority of apartments remain dilapidated, in disrepair and toxic. In addition to the lead contaminated paint remaining and chipping off the walls, there are other perpetual problems of rodent and roach infestations, broken door buzzers, understaffed or lousy security personnel, broken elevators and smoke detectors, widespread growing mold, and strangers loitering in the halls, staircases and playgrounds, ranging from drug dealers to homeless and the other casualty of lousy, indifferent and fraudulent inspection reports, the perpetual leaking roofs.

This is not some forgetful bullshit that got bandied about during the Rivington House deed lifting and property plunder conspired by appointed officials and craven lobbyists and developer donors to the mayor. This shit happened with people already living in these wasting buildings and with the shitty conditions that come with it.

There are reasons for this quite obvious willful and criminal indifference once you consider the actual programs the supposed clueless commissioner and her amoral boss mayor were more concerned with. The Mayor and Shola’s offices made sure the proper repairs went down for 3 project buildings when a private real estate consortium took control of housing project for privatization, betraying the feigned promise Shola made to the public about these certain groups that private interest will go to fund all repairs all of the buildings.

And of course there is the ghoulish plan to bulldoze over a playground to build a taller luxury tower in front of the Holmes Houses for the benefit of a developer donor to Mayor de Faustio. This awful century lease was doled immediately after the mayor had his case dismissed for his  pay-to-play 501 (c) (4) he ran in his City Hall office, more commonly and notoriously known as the Campaign for One New York (Shhh!).

Shola Olatoye really comes off like the definitive corporate tool. A yes woman. Her delivery when she explains and describes these plans is robotic. She’s basically a replicant for the agency and the corporate interests. With the blatant, brazen way she lies and fraudulently signed about bogus inspections is reminiscent of that corrupt soulless murderous counselor Karen Crowder arranging to put a hit on a whistle-blower who discovered toxicity in a her employer corporation’s weed killer from the movie Michael Clayton.

Ultimately, she is the classic idiom of the fox in the hen house, or in this case houses. But more a shifty wolf in fox’s clothing.

This mendacious scandal also proves how the oft-described pragmatic yet immoral de Faustio is no different than any of the slumlords recently convicted, fined and put on Letitia James’ Hot 100 list since he has basically used the same tactics and the agency’s sordid history to keep NYCHA underfunded in contrast to his long bullshit plan to preserve affordable housing. He is also proving that he’s no different and a carbon copy neoliberal version of his reason for winning re-election, Donald Trump, by having his aides gaslight reporters with denials and considering firing the guy who’s investigating him.

And like Figurehead Trump, also for his continued contempt for and passive aggressive mild repression of the press corps. For the day after the breaking news of Commissioner Olatoye’s deception, she was spotted walking to a fancy restaurant with a uniformed NYPD officer by her side.

This picture might come back to haunt her because of her unconscionable, enabled egregious decision, the next time she gets an armed escort like this it will be two armed men or women in suits holding her arms with cuffs on her wrists. Because this stooge broke the law with her deception. Federal law. Because as law professor from Fordham U. noted about the legality of this:

Under federal law, a knowing and willful false statement to the government is a felony that carries up to five years prison.

Fordham University law professor Jim Cohen called Olatoye’s conduct “clearly a false statement within the meaning of the statute,” and put the odds at “better than 50-50” she’d face charges.

“This is sort of ready-made,” Cohen said of a potential case.

While a glut of elected officials, by Public Advocate and in the near future mayor Letitia James and even some liberal and fauxgressive City Council people are demanding Shola to step the fuck down, the Mayor they all endorsed is standing behind her and supporting her still, and hilariously accusing outraged officials of political ambition (more odious Trump-like projection and hypocrisy) probably on the scant hope that his heinous good luck evading indictments will rub off on her.

Even if, this will not even be bittersweet, for the cost of the inevitable class action suit will be astronomical and will be added to the monstrous debt the NYCHA agency already accrued after almost a half-century of willful neglect and indifference from the organization’s administrative offices to city hall, the state house and naturally the federal government. And this will get even worse with that idiot savant Ben Carson running HUD and Trump’s daughter-in-law’s party planner running the east coast division of the housing dept.

Which will leave NYCHA truly vulnerable for privatization and to all involved in the Gentrification Industrial Complex. So if anything does get finally fixed or even marginally improved, and if there is more of effort to curb crime on the projects, the original and future lower income tenants will unable to reap the benefits of this long standing program and even the right to have a roof over your head if you have the economic means to make the rent. It will also probably mean a much longer wait than there already is now to get an apartment there. But with the encroaching and plundering budget plan on its way, there might not be any programs like section 8 or rent stabilization at all.

And there won’t be any help for the kids and adults poisoned from Olatoye’s and de Faustio’s brazen obfuscations.

This is not going to end well at all for the working poor and even the shrinking middle class. But if these two don’t get indicted for their illegal acts, it won’t end well for even society and justice for all. All at the bottom that is. Unless justice is finally meted out, if any still exists, and arrest warrants will be thrust upon this diabolical duo and her two recent aides forced to resign in a lame effort of optical reactive measures.