On April 5th at 7:20 am, a woman was riding to work when she was cut off by a box truck in a merging bike and vehicle lane on the west corner of East 9th street and 1st avenue. She wound up underneath the back wheel of the truck and sustained critical head, leg and internal injuries that led to her death a week later. 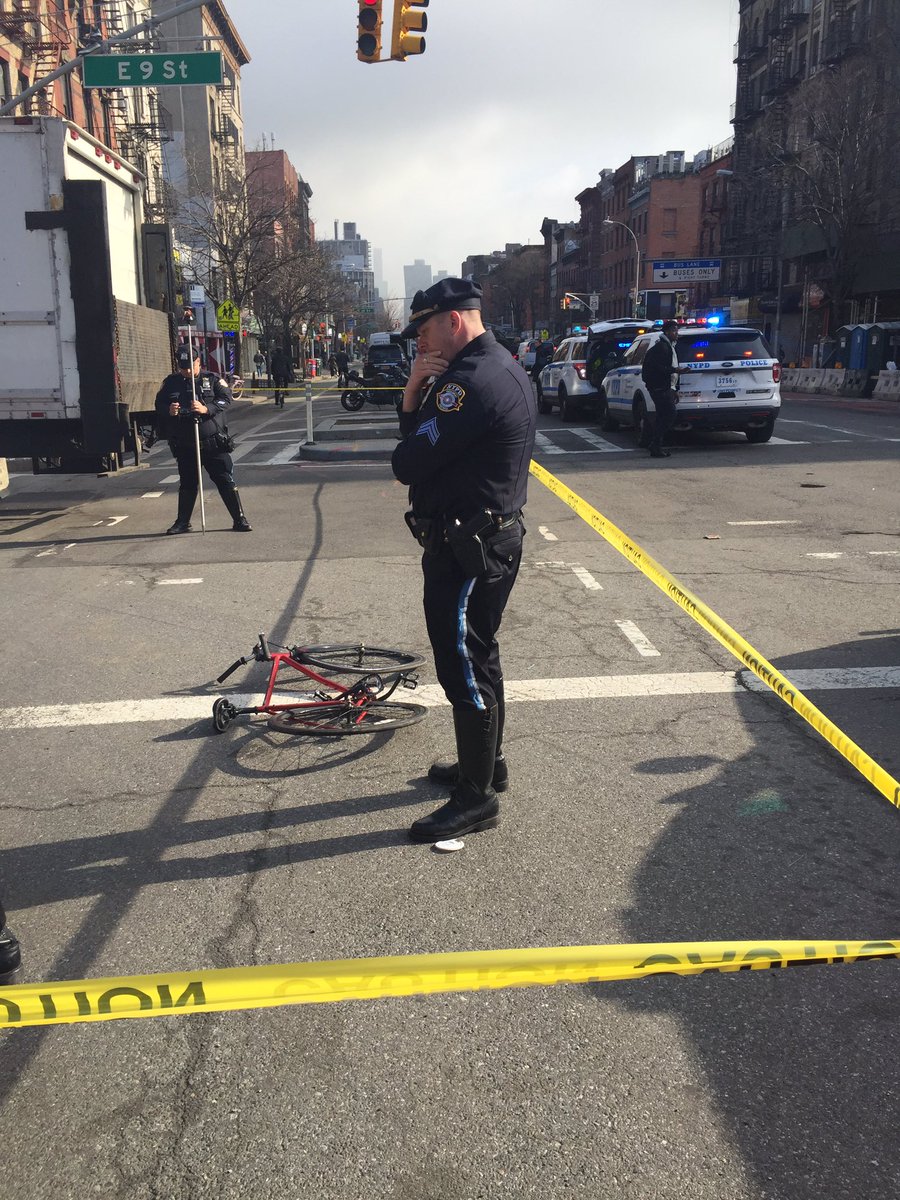 A few days after her death, the NYPD’s report by Detective Ahmad Nasser on the accident determined that the biker, Kelly Hurley, slipped as the truck driver crossed from the very right side of the street, colliding with the prone biker after her spill.

The 31-year-old cyclist who last week died of her injuries after being struck by a box truck on First Avenue had slipped and fallen off her bike before the fatal collision, according to an NYPD spokesman.

The truck driver made the left turn from the rightmost lane and did not have the crossover mirror required by city law for large trucks with front blind spots, the spokesman said.

Kelly Hurley, a studio manager for the SoulCycle on West 27th Street, was approaching East Ninth Street as she traveled up the First Avenue bike lane when she fell off her bike, according to NYPD spokesman Detective Ahmed Nasser.

“She fell off the bike then slid under the truck,” Nasser told DNAinfo New York.

The box truck was making a left turn onto Ninth Street from the rightmost lane, cutting across four lanes of traffic before hitting Hurley, according to both Nasser and the Department of Transportation. The truck driver had come to a complete stop before making the abrupt left turn, said Nasser.

The driver received a summons for not having a crossover mirror, which is required on large trucks so that the drivers can see pedestrians directly in front of them that may otherwise fall in the driver’s blind spot, according to the Department of Transportation.

There is so much wrong with this assessment and conclusion that it defies belief. Especially the laws of physics.

First off, how did she slip? It was a sunny morning, so the asphalt was bone dry. The woman also is a professional biker being an instructor at a Soulcycle gym. And second, where was this truck located as the driver decided to make that sharp left to turn west on 9th? Third, how fast was he going since the impact was enough that the victim wound up under the back wheel of the truck?

Apparently after community outrage from the citizenry from a seemingly dismissive conclusion from the authorities, the NYPD offered up a clarification or what might be an update of the happenings that morning in addition to further investigating the driver’s recklessness.

The NYPD’s Collision Investigation Squad plans to recommend charges against the truck driver who fatally struck 31-year-old cyclist Kelly Hurley at the corner of First Avenue and East Ninth Street, according to the unit’s commanding officer.

The squad, which investigates collisions to determine causation and possible criminality, has reviewed video footage of the April 5 collision that resulted in Hurley’s death and plans to recommend the Manhattan District Attorney charge the 59-year-old box truck driver who plowed into Hurley as she attempted to ride through a green light at the intersection.

The investigation is still ongoing, and ultimately the District Attorney’s office will determine whether the driver faces criminal charges, but the squad will do its best to hold him accountable, said Lieutenant Brian Reynolds at Tuesday’s Ninth Precinct community council meeting.

“It’s very tragic. I can only promise you that myself and my detectives will ensure that if we can hold the driver accountable, we will, but a thorough investigation has to get done first,” said Lieutenant Reynolds.

“My own opinion is, I’m going to be recommending the driver be held accountable,” he continued. “I can’t explain to you exactly what it’s going to be right now, but after what I’ve seen, he’s going to be held accountable, at least on my end from my office.” Reynolds said it was too soon to say what charges exactly the truck driver would face, though the squad has been evaluating whether the driver failed to yield. Reynolds also clarified comments made Monday by an NYPD spokesman who had said Hurley slipped off her bike prior to the collision. Hurley had intentionally dismounted the bike in an attempt to avoid the truck, Reynolds said.

“Ms. Hurley tried her best to avoid the truck, but unfortunately she couldn’t,” he said. “She put the bike down and slid underneath the truck, and the rear tires landed on top of her.”

I am no detective, but I am a lifelong bike rider who has witnessed and has been subjected to the reckless driving of stupid, distracted and territorial assholes of both vehicles and bicycles. And by the looks of this, going by personal and professional experience, the driver must have been speeding to get to the corner first and he would have not even bothered to look at the required mirror if he had one. Then there is the motive of the biker, how the hell did or even why would she put her down first if a truck was barrelling towards her from across the street? If she was aware of that, in the amount of time she allegedly put her bike down, wouldn’t she have just backed up to the sidewalk instead of remaining in the street? Or was it another case of wind force?

The second assessment seems as if to mollify all those concerned with the utter lack of justice and terrible indifference to the Ms. Hurley, and more like a preemptive defense hearing for the still unidentified box truck driver (Why won’t the NYPD disclose this information?).

Supposedly there is video footage of the incident before the collision. I was wondering that too when I read about this. If this guy cut across 4 lanes of traffic, he must have been speeding up 1st avenue and started to turn halfway on the block between 8th and 9th streets and then collided into the victim. So in conclusion, but without the necessity of forensics, Ms. Hurley had absolutely no time to slip or place her bike down. She only fell off her bike because she was hit by a truck. The speeding box truck by the reckless, selfish, foolish unidentified driver caused her fall by hitting her. Even the fact she had the right of way didn’t matter because of the fact that this idiot driver shot across the street in the manner of a bullet fired from a gun.

This was an act of involuntary and vehicular manslaughter.

Theoretically going by the way the cops assigned are treating this case, it seems to unequivocally a cover up to undermine this woman’s horrible and preventable death so it doesn’t negatively effect the stats of Mayor De Faustio’s Vision Tunnel program, and some innocent person following the rules of the road and still getting unnecessarily killed will just stand in the way of claiming progress in road safety at future press conferences.

All one can do if anyone decides to commute by bike, which is constantly being promoted by the city, and going by these reports, is be aware of your surroundings at all times to the point of paranoia. Most of all, don’t put your bike down when a 2 ton vehicle comes careening from across the road or street.

Hopefully, medical procedures will advance were it will be possible to graft working eyes to the sides of the head like a fish, because that would have been the only way to see where this imbecile driver was coming from to evade getting slaughtered.