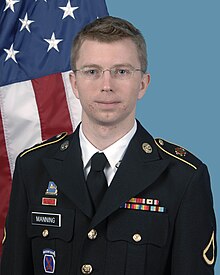 Washington (CNN)President Barack Obama on Tuesday commuted the sentence of Chelsea Manning, who was convicted of stealing and disseminating 750,000 pages of documents and videos to WikiLeaks.

Congratulations to Chelsea Manning. After enduring torture by her own troops and 2 suicide attempts, she finally gets vindicated for the shrewd and heroic work exposing the demented systemic wanton corruption, brutality and pillaging during the occupation of Iraq and all those who profited at the expense of thousands of troops killed and maimed, millions of citizens slaughtered, disenfranchised and displaced and the subsequent and inevitable rise of the resurgency which led to the religious zealot gangsters that is ISIS.

Once she gets out in May, she should get a parade down the Canyon of Heroes here in NY for the duty she served and for her love of this country by releasing these damning files to Wikileaks. The way she did it was almost comical but totally natural considering the hubris of her commanders in the Pentagon, Congress and the White House for continuing this retarded quagmire, she put it on a cd-rw labeled for Lady Gaga and a measly 1.6 gb thumb drive.

And what a massive amount of disgraceful data it held, enough that will ruin the credibility of this nation for a lifetime.

So raise whatever you’re holding, a beer, a shot, a fist, or take a pull from a joint, bong, pipe or blunt for the soon to be released from an unjustified, spiteful and stupid conviction of Ms. Chelsea Manning.

This is for you babe.