To people who have visited this digital publication, it’s plainly obvious how much I focus on the conditions on the street level, whether they were decrepit or ludicrous. So maybe it’s time to focus on what makes this city a visual wonder from a more personal perspective, like NYC’s epic building skyline.

One of them is the tower marvel commonly known by people who care as the Jenga Tower in tiny high-end enclave Tribeca. Completed in 2017, the luxury residential building is quite an aesthetically freaky sight and is truly distinctive and fascinating than the hundreds of steel and glass monoliths that have sprouted in the last four years in Manhattan, notably the atmosphere violating buildings on billionaire’s row on 57th St in Midtown and the silver beanstalks and upper class warehouses that line up the east river in Long Island City, Williamsburg, Dumbo and Downtown Brooklyn.

What makes the 56 Leonard St. tower truly unique might also be it’s biggest and oddest liability, and it’s the conspicuous gap at the base of the building between by the lobby and freight entrance on Church St. This anomaly was exposed in a posting by upscale developer propaganda blog YIMBY when they sent one of their intrepid reporters to scope out the penthouses at the luxury tower in one of their photos where the only bone that was propping up the 36 story building was single column next to the lobby and another column right next to the commercial space.

While marveling at their creation while it was in development, surely the developers and designers sensed they their inspiration for their building is a game where the object is to stack sticks higher and higher on a precarious base, which usually concludes with gravity being the ultimate victor, so in addition to their rendering, they thought about putting a gargantuan bean to fill that massive disturbing gap underneath the second floor mezzanine. 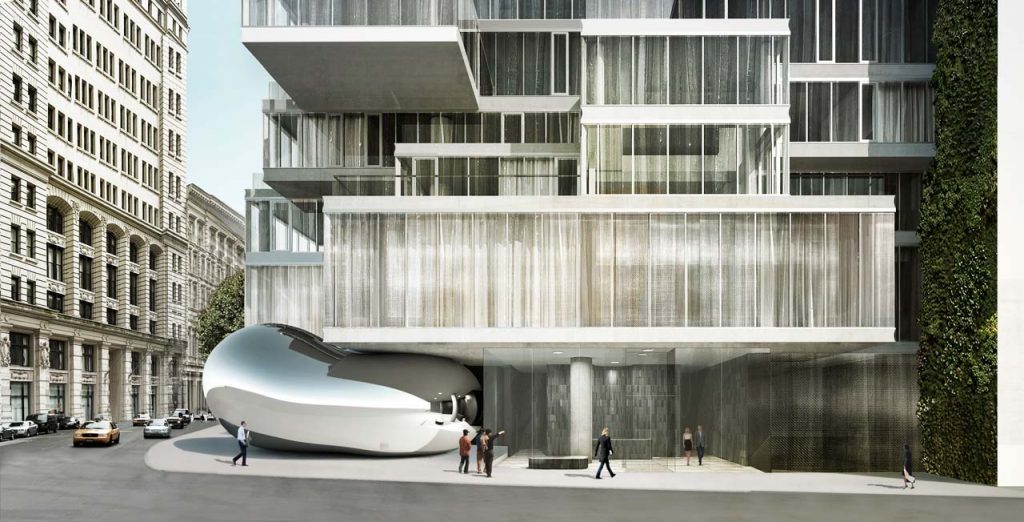 In the same 3-year-old YIMBY post, many photos from visits to balconies in other condos displayed alarming cracks, which makes it a wonder what the outer masonry looked like on the ceiling of that gap in the building. But surely the bean would be able to fix that by obscuring any disturbing visible blights while optically acting as a sturdy doorstop propping up the building. But the $56,000 question is why didn’t the developers decided to put the big bean under there first before stacking their assymetrical stories 400 feet high?

While that is just a question of the tower developer’s and owner’s judgement (and bizarre lack of it) the bigger mystery is the bean itself, which was announced it was going to arrive and be installed on Halloween 2019. Passing by the stylish haphazard monolith a year later after that announcement, I found the bean still covered in what looked like the wood panels that were pried from the crate it arrived in. (Not sure if Moishe’s delivered it).

Thinking why it’s been taking exactly a year to put this up, the perfect storm of COVID-19 came to mind, although the 6 Sq. Ft. report did say it would be installed in the spring and summer. But it looks like they started assembling it right at the fall equinox. And half the bean is still missing. Maybe it was still in Moishes truck.

Coming back one year later in 2021, the pandemic is still with us despite the power of the vaccinations. The streets are still quite deserted and lo and behold, the bean is whole but it’s still not completed after two years.

Looks like this bean would be an ideal place the store the tower’s “residents” tax haven condos laundered money.

While it’s still covered to protect it from the elements and smudging from curious passerby, it’s blatantly noticeable to any observant eye that this mighty bean is more for load bearing than for aesthetics, as the once former vacant space is now covered and snug tightly in the tower base like a giant doorstop.

Don’t know what’s above this ground level ceiling, because it sure looks like there’s something wrong with the masonry. Maybe it’s the stress from 30+ stories of reinforced steel, glass and cement that is causing these visible cracks which were apparently sanded and caulked over.

The tower is also having tremendous difficulty trying to get this store filled too. The rent they are asking for this commercial space must be comically astronomical. It’ll be overvalued even more with that artwashing goober mirror spooning it.

What started out as an innovative skyscaper has turned into another pathetic addition to the hyper-development of tower pestilence in Manhattan to go along with all the other behemoths that have metastasized the landscape and skyline from Downtown Manhattan to the East And West Villages to Midtown South to Billionaire’s Row and to even Harlem. It’s only a matter of time when the luxurious condos and balconies hovering on the higher and highest floors start to show stress. It’s going to be interesting to see what kind of art they’ll use up there. Maybe Alexico and NKF can ask Anish to design some giant pretzel rods or twizzlers to keep those pieces steady.