I got it made

The NYPD’s former highest-ranking uniformed officer is cashing in with his new gig at City Hall — thanks to a little-known legal loophole that allows him to collect both a pension and a taxpayer-funded salary, The Post has learned.

Retired Chief of Department Terence Monahan started collecting his $188,280 annual pension on March 28 while also earning a $242,592 annual salary as Mayor de Blasio’s new senior advisor, according to documents obtained through the Freedom of Information Law.

Retired public employees who are under the age of 65 and are collecting a pension are required to file paperwork — known as a 211 waiver — making the case for why they are uniquely qualified to collect an additional public salary.

The applications then go to the Department of Citywide Administrative Services or the New York State Civil Service Commission for approval. Without the waiver, the retiree is limited to $35,000 per year, according to state law.

But that approval was able to be sidestepped with Monahan placed on the payroll of the Economic Development Corporation — a city-funded nonprofit organization — following his February appointment to oversee the city’s safety planning for COVID recovery.

Pensioners who are employed by a public benefit corporation, like the city’s economic development arm, don’t need to file a 211 waiver, according to a 1997 decision by the city’s Law Department, DCAS spokesman Nick Benson said. The ruling has never been challenged in court.

On top of the dual income, the 60-year-old former cop is also still owed a hefty payout for unused days off, estimated at nearly $300,000, according to a review of his payroll records obtained by The Post. That lump sum payout is still pending, the city’s payroll office said.

Reached by phone recently, Monahan declined to comment on his pay.

Why should Terry comment, he’s the luckiest man and he’s got the easiest job in NYC right now and he acquired it by being a recidivist dirty cop while working under the most cravenly corrupt and cowardly mayor in NYC history.

For Terry winding up to become the deputy recovery czar in City Hall, he didn’t have to try that hard considering what he accomplished during the pandemic last year. First he tried to orchestrate a heist to steal a truck full of face masks and other PPE’s  meant for doctors, nurses and other essential workers in hospital services (most of whom did not even bother wearing face masks), which induced a stunning profane laden  reaction from the city’s former doctor health commish Oxiris Barbot, which led to her eventual phasing out and firing by the Blaz.

Then after the Mayor’s team arranged a media circus and stunt for the NYPD to feign solidarity for the policing public execution of George Floyd, which Monahan got on his knee and held hands with other BLM protesters, Monahan ordered a brutal NYPD offensive against hundreds of protesters who arranged a demonstration in Mott Haven in the Bronx by ordering cops to kettle them from both sides on the streets to prevent them from departing after the Blaz’s 8 PM curfew and letting them loose to viciously attack them as they walloped them with clubs, attacked them with bikes and also engaged in dogpiling individual demonstrators tactics the cops used with absolute gleeful expressions. This day of infamy in NYC as well as the other days of brutality the NYPD inflicted on protesters during that week of demonstrations got immediate condemnation by Human Rights Watch for the brazen suppression of free speech and free assembly and eventually was subjected to a thorough investigation by D.A. Letitia James leading to NY Senate and Assembly laws calling for the expunging of policing records of every cop on the force. It was most certain that the record of Chief Monahan and whatever abuses and violations he accrued throughout his career was bound to be revealed.

But when 2021 came and Mayor de Blasio laid down the base for the”recovery for all of us” mission as expose’s of rogue cops and disciplinary actions were starting to mete out (however incrementally), The Blaz did his usual machinating and bailed out Monahan and transferred him to NYC Economic Development Corporation Dept. to be the deputy czar of the city’s recovery immediately after he resigned and traded in his acquired uniform for a bureaucrat’s suit, thereby acquiring his cherry six figure pension while getting a bigger six-figure salary while also exempting him from D.A. James disciplinary probes in his new position as an “advisor”

When asked about Monahan’s city salary double dip, The Blaz was asked if this profligate use of taxpayer dollars for one man and his advisories has resulted in any dividends in services for the city as well as it’s recovery and security. It’s a waste of time to print de Blasio’s response because he predictably didn’t give one, but recent events have showed that Monahan has taken to his suit as a do nothing bureaucrat very well.

Presumably, the justification for Monahan’s shady transfer and presence in City Hall and the EDC is because his career and experience as a police officer would be that he would give sage advice for keeping the streets safe and ensure economic gains and a return of tourist activity in the city’s popular destination areas like Times Square. But look at what’s happened there since the weather got nicer, two shootings and four people hit by stray bullets despite a massive police presence and surveillance cameras on every lamp post and building and vagrancy and other petty crimes as not subsided as well.

Then there is the issue of Washington Square Park, which as become a quasi-autonomous zone which daily open air drug abuse  and nightly relentless noise pollution from all-night DJ ragers and yelling from transient denizens of the greenpace loitering past the parks closing, under the watchful eyes of de Blasio’s NYPD, who are clearly under orders to maintain their surprisingly tolerant behavior despite demands by residents for them to take action and despite the blowback from their collective inaction resulting in slashings and assaults in the vicinity.

Which makes it a wonder why the cops have been standing down so long from enforcing the normal curfew and allowing these baccanalias and calamitous events to continue. Turns out that the man who kneeled along with the former Chief Monahan  for de Blasio’s NYPD’s gaslighting solidarity photo op for the George Floyd/Black Lives Matter movement is David “Shaman” Ortiz, who just happens to promoter of the WSPAZ DJ ragers and also for illegal unsanctioned public boxing matches that are held right by the Arch the cops are protecting. And it’s quite clear that they are protecting Promoter Ortiz party plans as well, which gives the impression that this guy has been giving de facto permission and permits in the park as part of the city’s recovery for all of us, giving de Blasio the optics to declare the Summer of NYC is off to a rousing successful start. Maybe that’s why the Blaz is confident that the violence and noise in WSP will take a natural course back to normalcy. 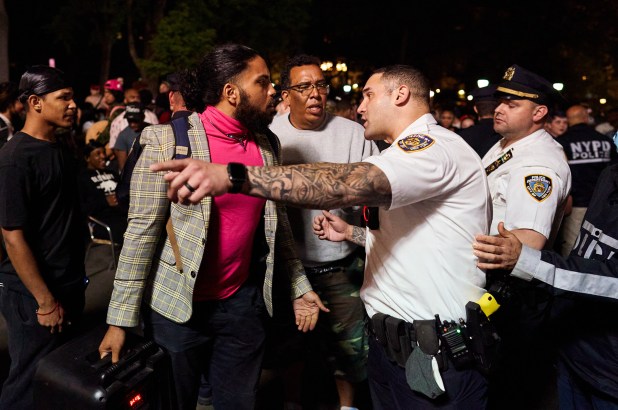 Ortiz has not been shy about this symmetry either nor his contempt for the residents of this district and he can’t help himself from talking shit about it too.

“This is my response to the residents, If you have an issue with amplified sound and you live in the downtown area, you live in the Washington Square Park area, then you should move.”

Can’t really blame this opportunistic reprobate for his hubris, especially when looters were able to capitalize from last year’s BLM protests that got the majority of the police response and aggression last year as they ransacked every high end designer clothing and jewelry store in Soho and every small business in the middle and lower AMI income town Fordham in the Bronx with hardly any effort at repression from the NYPD. Also revealing is that these lootings were still continuing throughout 2020 even without the presence of protests ahead of them. Protests also continued sporadically during last year too and guess which public activity got the bigger police response again? All this impunity and abuse of authority made possible under the purview and the street policing decisions of former chief Monahan.

Now that Monahan is making a half million dollars this year and felonious crimes and shootings making distressing upward trajectories, it’s a wonder if his advice and his presence at the city’s abominable EDC office is actually being detrimental to the city’s recovery and also if he is giving bad advice on purpose since it’s highly doubtful he’s going to remain a city worker when this hellish final year of the Blaz is over. Looks like the current circumstances makes it clear he still as much a human profligate tax boondoggle and moral hazard to the city as he was when he was wearing a white shirt being an abusive and disconnected high brass cop and police chief.

And he’ll continue to get away with it. Because the lawlessness that’s gripped the streets doesn’t hold a candle to and is only an extension of the bureaucratic anarchy directed by the Blaz in City Hall.