From 8 p.m (6 Pacific) to 8:07 p.m. was the greatest and most pleasurable 7 minutes of TV history of this 20 year old century. Ricky Gervais, actor and comedian and mostly creator, producer and writer of “The Office”, demolished the fourth wall of celebrity and the power entrenched with it and reminded the audience of their complicity of everything wrong in society, the world and how they have obtained their obscene wealth.

Hosting the Golden Globe awards for the fifth and most definitely the last time (unless the rich and famous are purely sadomasochistic), Gervais went deeper with his vitriolic roasting of all the talent and executives in the audience than he did the last four times, which was just comparably ordinary roasting of their dubious talents and the mediocre product they put out. Because the last year have been quite different for the rich and infamous. Not only has the movie and TV industry over-saturated the market with garbage comic book series and unchallenging and unmemorable storytelling, unnecessary rehashes and “prequels”, but the whole poisonous crony culture and underlying corruption that was once kept secret from the masses. Ricky also deconstructed the phoniness of the industry permeating politics and discussion befouling social media and opinions and (hopefully) may have destroyed starfuckery.

Sure he got to skewer some fellow celebrities and odious pop culture contributions, most dutifully about Felicity Huffman’s brief incarceration making license plates and the odious infinitely singing talk show minstrel James Corbin and how he played a fat pussy last year and then starred in the bomb “Cats”. But this one cut deeper because like the comedy, it’s all about timing and easy targets. Especially when the targets are high up. And this years targets were Harvey Weinstein and Jeffery Epstein.

When Ricky brought up Weinstein, a big fat ugly movie producer who molested hundreds of actresses and models, he gave a warning to all those in the crowd of award contenders, assorted billionaires to be cautious if Ronan Farrow has a scoop on them. I wonder if the actresses who were already did his movies without having to survive his skeevy advances stifled a nervous laugh at that. Gervais responded to the nauseating collective groans with vicious disdain and told them to come off it.

As well as they should since Weinstein’s trial for his sexual harassment and sexual assaults just began. The big load is even showing up to trial pushing a walker with tennis balls on them since his fat ass and lousy posture has put too much weight on the stands. Even though only a few weeks before his first court appearance he was at an East Village niteclub sans walker but with an entourage and an astroturfed audience in tow, viewing a female comedy and improv show much to the horror of the performers there and some lady patrons seizing the opportunity to yell at him and his foul presence. Currently, the jury has finally been selected and Harvey is still pushing that walker to court. He’s either goldbricking being that he’s been producing movies all his life he figured he can give a performance too or pushing that walker is the closest he can get to simulating unwanted sexual advances on a woman. 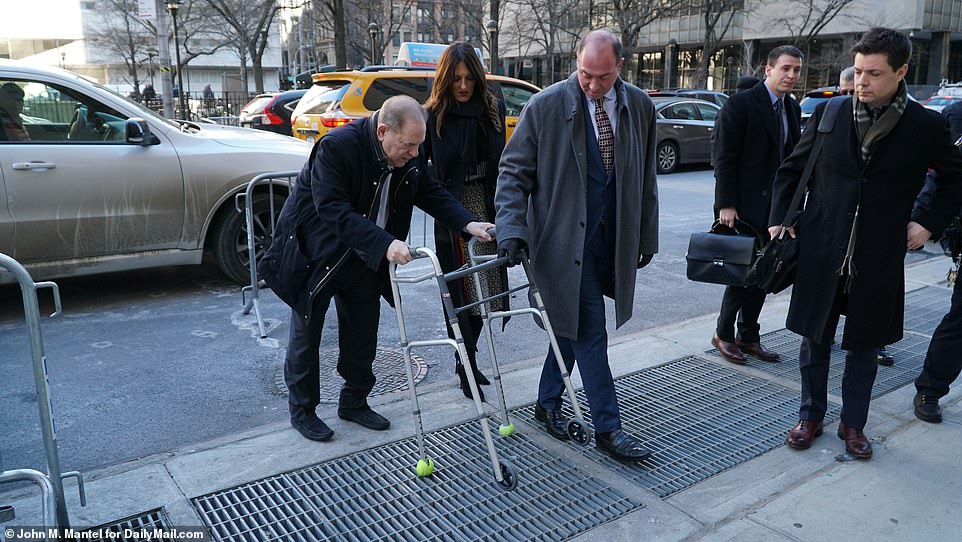 But the next one was the granddaddy of all big shot audience roasting, as he was doing a joke that somehow integrated promoting his show on Netflix where he plays a person trying to kill himself and doesn’t, he compared the protagnists’ failure with the perfect execution of Jeffery Epstein, who didn’t kill himself either. That really killed the whatever noise was left in the ballroom. I don’t think anybody even budged. Ricky, absolutely delighted at the silence and surely the look of shame and menace on the faces of the powerful crowd, told them I know he’s your friend and mused aloud that they all must have been upset to take their own private plane to the Golden Globes.

It must have been easy to deliver the Epstein punchline and the body blow to the elite crowd when an hour before the Globes broadcast and Ricky’s monologue, 60 Minutes did 12 minutes on how Epstein didn’t kill himself by having a forensic doctor, Dr. Michael Baden, hired by the brother of the banker/hedge funder/secret agent man/sex trafficker/pedophile who proved just that.

Pictures showed the blanket that was alleged Epstein used to commit suicide and it didn’t even have any indentures on the fabric. Not only that, but the material looked so flimsy and weak that it’s doubtful that it can even be capable of squeezing the cream out of canoli. But there were plenty of electrical cords in the cell though. Then there was the xray of his neck which showed an extra broken bone that could only be done by strangling and not from self-harm. And the clincher that really should confirm a murder took place that night in the MCC, there was blood found in Epstein’s eye socket capillaries. According to the Dr. Baden, when you hang yourself to death, blood doesn’t flood to the head. And the blood mostly flows to your legs but Epstein’s were pale. This was just reconfirmed on the Dr. Oz show too.

Gervais nailed two perfect jokes with such uncanny perfect timing on that glorious evening. The real kicker is that it overshadowed as well as overwhelmed the actual awards show and winners. But Rick wasn’t through getting medieval on those superstar jabronis. For the last two minutes he railed about their hypocrisy embracing social issues and causes and the vicarious way they bring attention to them without doing anything of substance or even while still engaging in harm while being philanthropic. When he brought up Apple’s CEO for producing a show for their own network about women’s empowerment, Rick immediately brought up the fact that Apple still uses child labor and pays shit wages to factory workers assembling their cellphones. And in the best joke of the night, also how every actor is full of shit themselves for feigning concern for human plight when if terrorist organization ISIS had a streaming network they would jump at a chance to do a show for them (actually, ISIS has been using Facebook and other platforms for their streaming network for their mass murders for years). Then he capped it off by telling them to take their tacky trophy, thank their agent and their God and fuck off. Magnifique’

The only thing that was missing in his savage monologue was that he didn’t bring up how the best picture nominees, Motherless Brooklyn, was responsible for the death of a fireman and the destruction of a building that burned down after shutting down a sprinkler system and leaving other fire hazards behind during production. And the subsequent coverup and undermining of a fire marshall’s report by FDNY high brass.

Why is that? Let me explain…

In the aughts after the tremendous acclaim and success of “The Office”, Ricky was given the opportunity by Hollywood for a full length feature film that he would star and produce in. A movie called “The Invention Of Lying”* It was highly anticipated (mostly by his fans) and it was taking quite a while to come out. The movie was about a utopian society (or planet) where the concept of lying was non-existent, everyone told the absolute truth, even when it was awkward. Then when someone close to Ricky’s character was about to die and saw how people were getting upset around him in the hospital room, Ricky invented a lie about a place where people went when they expired and it was managed by a big man who lived in the sky. Ricky’s protaganist then became a messiah figure among the general public for the rest of the film.

But on that Sunday night on January 6 2020, Ricky was (and still is) the big man on earth,using the truth like it was just invented to destroy the perpetual phoniness and power structures that are still gripping and shaping societal norms, wasteful celebrity worship, dubious self-serving philanthropy and an inequitable justice system.

While there are other entertainment truth tellers fomenting discord to the rotten and weak yet still powerful establishment like Jimmy Dore, Lee Camp and Joe Rogan, Ricky Gervais is clearly the most omniscient of all of them because of his creation The Office and the American version that starred Steve Carrel which lasted for 10 years and still going in syndication, so Ricky’s making lots of dollars to live comfortably, and continuing to create new shows and work standup and basically say whatever the fuck he wants being an A-lister himself. Money is power as well as speech in America and Gervais is using it wisely and brilliantly. Comedy hasn’t been used this efficiently against extreme and undeserving power structures since the late great Bill Hicks.

With his truth drones striking the Beverly Hilton Hotel, Gervais has basically become The One, like Kenau in the Matrix, our fact-based Messiah. And like Brian from the Life of Brian, he is a very naughty boy but doesn’t give a shit what the rich, famous and powerful think of him as he lays out their true selfish motives, dubious altruism and villainous business models for all to see and will surely continue to do so.

Surely he would hate this divinity as well as he would mock this take like he does to his orange shaped head engineer Karl Pilkington, but if Ricky doesn’t get sainthood when he dies much later on, for the sake of humanity let there be a hologram of Mr. Gervais hosting all the entertainment award ceremonies in the future. Plus an infinite stand up residency in Las Vegas.

*(The movie, while entertaining and heavy on pathos, didn’t do that well. Mostly because it was reduced to a romantic comedy instead of a dystopian story with unfortunate ramifications, which is what I expected. Jennifer Garner was lovely in it though)