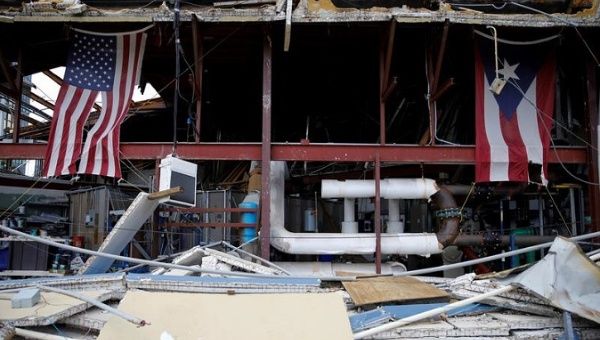 Hurricane Maria, a relentless, apocalyptic storm that engulfed and mostly demolished the U.S. commonwealth state Puerto Rico, killed 4,645 citizens in a Harvard report published in The New England Journal Of Medicine. Making this the deadliest hurricane in 100 years and the biggest amount of fatalities on a populace since 9/11/01.

This report comes almost a year after Figurehead Trump arrived to the island and marveled at the reported death toll of 16 casualties at the time and remarked that the devastation was not that bad at all compared to Hurricane Katrina’s mortality rates in New Orleans and then tossed beautiful absorbent paper towels in a room full of desperate, star-struck citizens.

This report comes as the government of Puerto Rico, run by the himbo Governor Ricardo Rosselló, closed off data requests to the public and researchers back in December 2017 and has been sitting on their asses awaiting for a commissioned study contracted to George Washington University to complete as the official death toll for the last year remained at 64, giving the impression that maybe they do have the updated amount and they whited out the first and fourth digits. Governor Rossello is on the case though, as he expressed by conveying superficial rage in an interview on CNN.

Figurehead Trump, along with his accomplice and Vice President Mike Pence, did not utter one letter or bat an eye when they showed up at a FEMA meeting about the devastating Harvard study, which on the bright side at least they did not attempt to refute it. On the predictable side, they were nauseatingly crass and soulless, showing seething contempt of not only bringing up the fact of the tragedy but of the people they don’t think they represent and are responsible for their security. As is expected of those two bastards.

Pero el mayor bastardo es Governor Ricko Suave, whose duplicity is way out of bounds in the obvious delay and cloaking of the true mortality totals which cover the day the hurricane hit and her societal and environmental impact, mostly derived from the months long blackout of the commonwealth’s electrical grid and the total lack of potable  water.

But the charming governor has more pressing necessities and niceties to concern himself with. Like repressing his constituents desire and civil right to protest his and the un-elected fiscal boards austerity measures by deploying 3 times the amount of cops for every citizen and also equipping his personal taxpayer funded stormtroopers with the best armor and gas cans to thwart such attempts against social activism and justice. And also on making sure to not ward off any venture capital interests to the island state with such gloomy stats so young wealthy pioneers with bitcoins can arrive unimpeded and remake/remodel Puerto Rico into a resort utopia these soulless asshole big spenders for partying all year round. And why the hell not turn the commonwealth into a spanking new tax dodging haven for current and future miserly oligarchs to hoard their massive wealth.

Think this is some dystopian fiction, think again. What Governor Suave’ along with his hack Democrat allies in America are enabling is The Shock Doctrine on steroids and plutonium, as villages and towns throughout Puerto Rico are still undergoing months without or intermittent amount of electricity as the cities are doing just fine and have experienced a revitalization as hundreds of thousands of citizens are still struggling while their government fiddles and finds myriad ways, from incompetence to indifference, to deny the suffering masses their rights to their livelihoods and general and civic services.

And also their right to find out if a relative or friend has died from the ramifications of Maria 2017. But Governor Suave’ thinks he can get by on his Menudo-member boyish good looks and elite friends and acquaintances in business, high finance, and the Democrat Machine. It’s easy to see why he needs to hide behind armored police.

Governor Suave’ only has to worry about the next hurricane that will hit his state. But the way things are surfacing now that the death toll has been professionally tabulated and exposed, the next storm’s name might just be Revolution.