Figurehead Trump took a breather from writing executive orders to 1: let congress legislate a couple of stupid sadistic things like honoring the second amendment rights of the mentally ill to possess guns, and liberating irresponsible and miserly energy companies to resume dumping of coal waste and debris into the nation’s waters (you’re not alone Dakota Protectors) and the freeing of methane to the air around it, and regulations ensuring the health and safety of their dedicated yet expendable employees. 2. To acknowledge and reassure his holy roller donors that their christian fatwa agenda will not be overlooked.

Take the “bestwords”, a phrase that has replaced “doublespeak”,  uttered by Figurehead Trump from his first address at the annual National Prayer Breakfast:

“Our republic was formed on the basis that freedom is not a gift from government, but that freedom is a gift from God. [APPLAUSE] It was the great Thomas Jefferson who said, the God who gave us life, gave us liberty. Jefferson asked, can the liberties of a nation be secure when we have removed a conviction that these liberties are the gift of God? Among those freedoms is the right to worship according to our own beliefs. That is why I will get rid of and totally destroy the Johnson Amendment and allow our representatives of faith to speak freely and without fear of retribution. I will do that, remember.”

Emphasis mine. Why? Because of the Citizens United decision, where the Supreme Court agreed with the namesake political activist group and officially sanctioned money as free speech (the establishment of money talks, not sure where these people stand on bullshit walking). The” bestwording” employed by Figurehead Trump is not a clarion call for the overtly religious to defend themselves from the repression from secular and agnostic types on their right to worship, which they already had being that it’s instilled in the constitution, but to raise unlimited money through various channels for the candidates of of their choice and liking. It’s made it easier for billionaire ideologues like the Koch Brothers and Sheldon Adelson on the neocon side and George Soros on the neolib, to name a few, to donate unlimited amounts through various superpacs and 501(c)(3) and 501(c)(4) . So one can only imagine what massive evangelical institutions will exploit campaign fundraising deregulation. The money raised from their devoted flocks and through the possibility of legalized money laundering through their churches and charities will ensure the materialization of a candidate in the mold of Elmer Gantry.

Or it will certainly, eventually lead to other religious organizations to seize the glorious opportunity if Figurehead Trump goes on to destroy it. Religions like protestant, scientology, sun worshippers, and of course the Figurehead and his self-righteous benefactors and enablers adversary, Islam, can allocate unlimited amounts of speech/money from anyone and anywhere, especially through the use of 501 charity non-profits. Because of the total lack of those pesky sinful regulations, some benefactors may turn out to be Saudi Princes or Tom Cruise and the unaccounted for loads of donor cash will be part of the ether in DC, and various state and local offices (as if they weren’t already, re: aforementioned billionaires). Think about that Mr.Figurehead.

But before the blowback happens, there is the prospect of christian zealot legislation involving homosexual conversions and criminalizing planned parenthood, and the drilling and extracting of energy resources in the mountains, lands and oceans that God created.

The day after being reminded of religion and how disenfranchised the religious right base was, unencumbered by the obvious lie behind it (what happened to the 9th commandment? I guess the Trump vessel was carrying the gift of liberty by God for an exemption from it), the Figurehead went back to the white house and wrote another executive order to lift regulatory provisions on financial trading by banks, venture capital and hedge fund firms. Or in his usual ineloquent phrasing, “doing a number” on the Dodd-Frank Act: 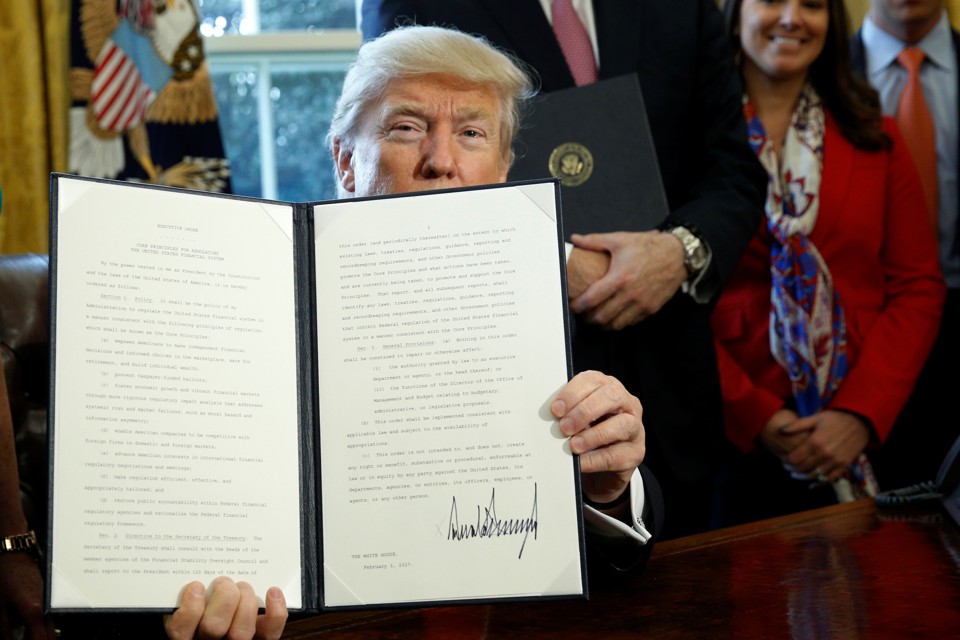 The Atlantic: Trump Begins to Chip Away at Banking Regulations

Prior to a meeting with his economic advisory council on Friday morning, President Donald Trump held a briefing to set the agenda for it. “There’s nobody better to tell me about Dodd-Frank than Jamie,” Trump said, referring to 2010’s Dodd-Frank Act, the single most visible legislative consequence of the banking crisis, and also to J.P. Morgan’s CEO, Jamie Dimon, with whom he would later meet to discuss regulation. “We expect to be cutting a lot out of Dodd-Frank,” Trump said. “I have so many people, friends of mine, with nice businesses, they can’t borrow money, because the banks just won’t let them borrow because of the rules and regulations and Dodd-Frank.”

Emphasis mine again. Because the philanthropic yet creepy tone this statement conveys gives yours truly the impression that Figurehead Trump not only aspires to be an outright autocrat of the nation but like the legendary and notorious mafia don mob bosses who ruled the streets of NY (and Chicago and Boston) in the last 3/4 of the 20th century. Don Inutile didn’t seem to mind having them at his disposal while building his eponymous empire in the 80’s.It would be nice to know who his recent friends are, maybe hoteliers, luxury condo developers and golf course owners with the Trump brand seal of approval in God’s Country. And also around the world, specifically where his son Eric has been acting as a quasi–envoy, and oppressive nations ruled by royal despotic regimes.

But it mostly might be his friends in Goldman Sachs, meaning the three avaricious hounds in his cabinet, recently confirmed Secretary Mnuchin (thanks Schumer, you baby), Strategist and unilateral Madman NSA Advisor Steve Bannon, and the obvious architect for it’s dismantling, Economic Director Gary Cohn, who, as with his heinous tenure making milions at his former workplace fucking with clients and investors, will surely know where all the derivative trading and credit default swapping money and finances will go, if their plan to neuter Dodd-Frank will be to destroy the Volcker Rule and the Consumer Financial Protection Bureau, which is chaired by Senator Elizabeth “Next President” Warren. The CFPB is basically considered to be ISIS to the megalith banks for its crucial rules to protect homeowners and consumers from the former nefarious tactics of their banks that they entrusted their livelihoods to. Prior to these institutions, it made millionaires in the specific fields traversed by Mnuchim (mortgages) and Cohn (mortgages also, and nation debt).

Some of the Figurehead’s other friends maybe his peers in real estate. Especially those involved in changing the skyline in major cities with behemoth tower development that’s behind the rapid rise of gentrification and the exceeding cost of living among the working poor and even middle class residents. Certainly when Trump is done after 4 years, or 8 or even if he’s impeached or just quits,  would like to get back to slapping his eyesore goldtone brand on glass monoliths of upscale blight.

With these two debts to the evangelical christian and finance complexes paid to continue to his good fortune, self-promotion and self-aggrandizement, when will he get around to the forgotten. The people. The people who came to the rallies, that shared the fury and frustrations he claim he understood. That went to the voting booths, checked his brand name and elected him president.

Does Figurehead Trump consider them friends anymore? Or was the blanket Muslim and immigrant ban and suppression of gay intimacy and denial of health care to poor women suppose to keep them mollified while he’s plotting to change the rules for the benefit of his allies?

The forgotten has to wait a little longer. But it’s alright because the figurehead already signed up to run for another term and he’ll get around to them. Believe me.