It’s been a week since Mario’s sons’ New Years Eve underground Gatsby party christened phase I of the Q line 4-stop multi-billion uptown extension after a near decade long behind schedule wait. I haven’t been there yet, but so far so good, it’s working fine and looks like a Whitney Museum expansion, and it’s gave a lot of breathing room on the Lexington Avenue Trains.

Not so good though that in the week of it’s debut, a LIRR Brooklyn bound train went off the rails a few days ago, injuring hundreds, which can be due yet again to overlook neglect of other transit infrastructure and service in favor of tonier projects like the stylish subway shopping mall in Columbus Circle and the installation of free wi-fi. For the latter, one hopes it won’t be used by radical religious zealots or habitual criminals, and Andy’s little baby on the upper east side.

I was wondering, now that those new trains are running, with some delays and grievances naturally, it’s only right that other parts of our transit system will finally get overdue attention and improvements it is due to the tax paying commuters. Particularly the one that’s been an apparently painstakingly arduous process that is the Lefferts Blvd. entrance at the end of the A, a line that has been dubiously honored with being one of the two worst performing trains in the city. 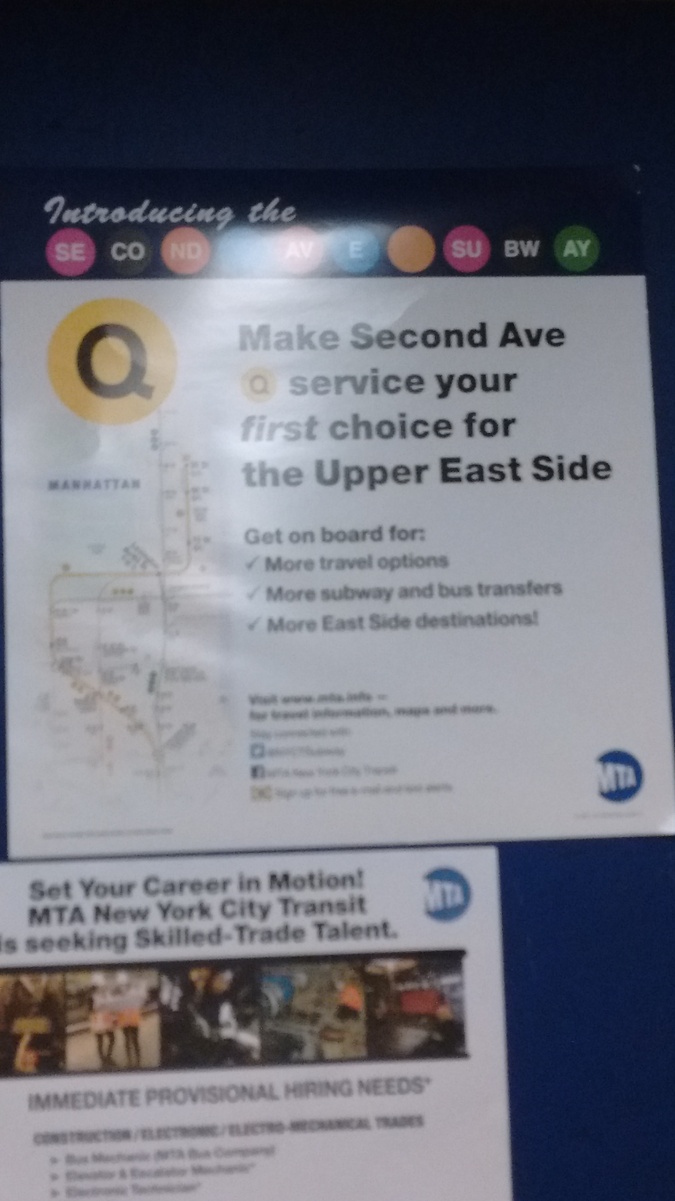 The station has been endowed with a vibrant new sign! Extolling the awesomeness of the second avenue line! Now more destinational than ever! More travel options for residents bored of their humdrum surroundings of Southeast Queens!

Destinational. Is 96th st. really a pinnacle destination like the top of the Fiji mount? Is that even a fucking word? Like embiggen or cromulent? The MTA is now resorting to making words up to promote it’s achievements. And using travel options as a selling point? People take travel options everyday on the Q31 and Q10 buses on the boulevard. It’s a daily routine. How embarrassing.

But a semblance of normalcy still remains at least. There is still one set of stairs and the morning and evening bottlenecks continue. And the two most discouraging and depressing sights are being maintained.

The area still awaits. The MTA needs to embiggen it’s maintenance and cleaning crews. Most of all, the return of cromulent contractors to finally finish that station on schedule. Just make sure they ignore the typo.