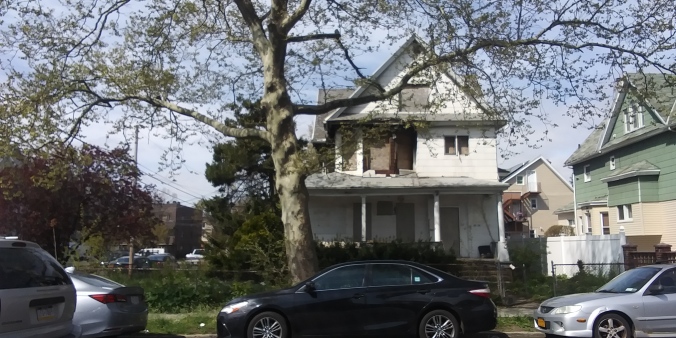 Spring in South Queens is off to a despairingly dangerous start, particularly with targeted muggings of elderly Indian Sikh men in the same vicinity that’s located on Lefferts Blvd near a Guawdara Temple one block west. First was a violent assault on a 70-year-old man going on an early morning stroll and a little over a week later two other elderly Sikh men were mugged and robbed by two men on the same corner around the same time. In both incidents, the criminals knocked their religious headwear off their heads, giving credence to Sikh community leaders theories of being hate crimes against them. 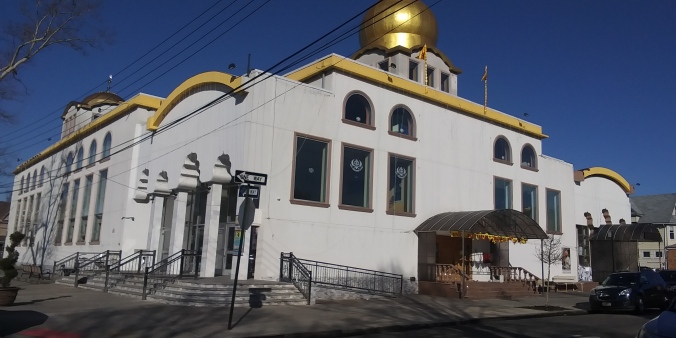 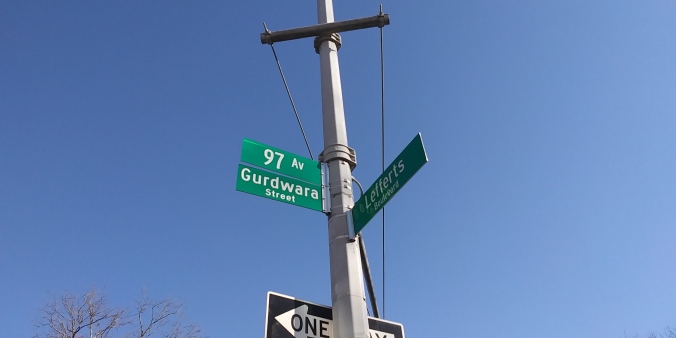 The two men involved in the brutal attacks eventually got arrested after being on the lam for a few weeks, one of them who was involved in both crimes. Yet something caught my eye from the Queens Chronicle report after the young man involved in the second attack:

Two Sikh men were attacked Tuesday morning in Richmond Hill near where a hate crime against a member of the same community occurred last week. One man is in custody and another is still at large.

The incident occurred near the intersection of 95th Avenue and Lefferts Boulevard just after 7 a.m., according to police, a block from the Sikh Cultural Society gurdwara.

The assailants removed religious headwear from the men and stole their money. The incident is being treated as a robbery and a hate crime, according to police.

Police believe the suspect they have not caught also committed last week’s assault against Nirmal Singh, 70, said Community Affairs Officer Scott Adelman of the 102nd Precinct at the Community Board 9 meeting on Tuesday night.

The 102nd has a directed post at 95-54 Lefferts Blvd., which appears to be abandoned. It is believed that both suspects were squatters there.

“That car will not leave until the perpetrator is caught,” said Adelman.

Sukhjinder Singh Nijjar is the chairman of external affairs and the elections commission at the Sikh Cultural Society. He says the society is working with the precinct and hate crimes unit in the aftermath of the attacks.

He hopes to see increased police presence and is working to get a car permanently assigned for the temple area. On Wednesday, he and a group of about 15 community members met at the temple at 3 a.m. to patrol.

“We’re exploring all these avenues to see if we can have this area covered, not only for our local Sikh community, but also many other multicultural communities in this area,” he said, adding that the society will continue to hold elected officials accountable on delivering on their promises.

Strong words indeed, especially to elected officials who continue to remain insouciant to the rapid rise of crime in Queens and the other four boroughs and most of all to the party all the time mayor Eric Adams. But in the case they should hold the Queens Chronicle accountable for getting the address of the house were the suspects were squatting in (twice in the same article). The actual address is 94-54 Lefferts Blvd, and  this house has a sordid past and currently is casting an ominous aura. I covered this house exactly one year ago right after a man was found dead on the porch one morning, a result of being bludgeoned in the head by two other homeless men.

Evidently, this abandoned house has got even worse and more squatters are occupying it even if they can’t get inside. 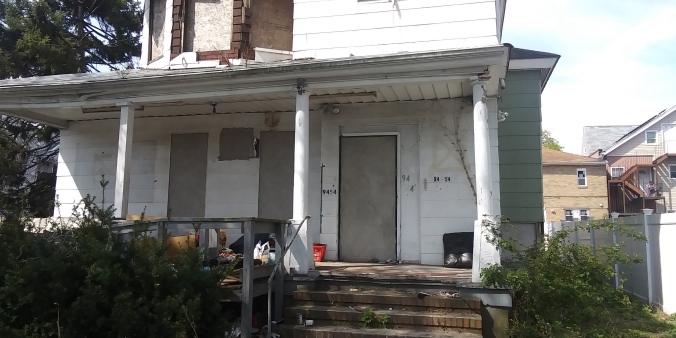 The porch is still reliable to sleep rough in, although the mattresses and everything else that’s being hoarded here looks to provide enough comfort. 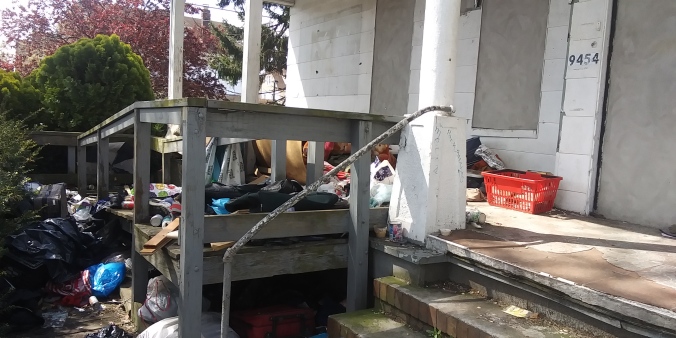 BBQ grill for cookouts. The ramp (probably installed there for handicapped or wheelchair-bound elderly residents) has become a reliable storage and disposal unit and also to ward off trespassers. And possibly other homeless people. 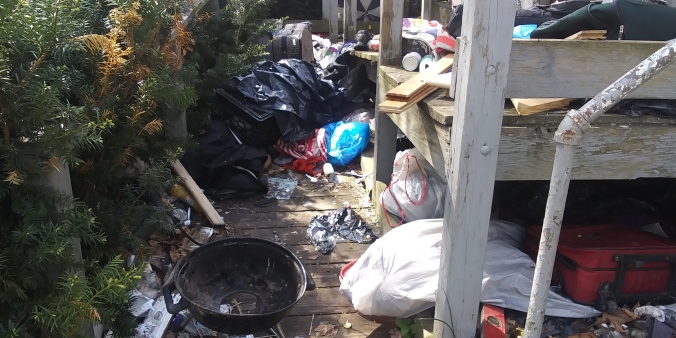 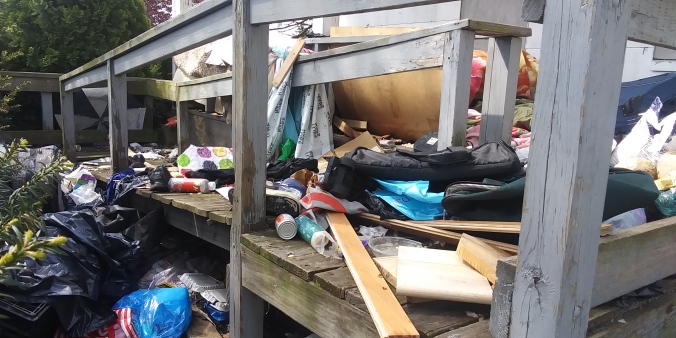 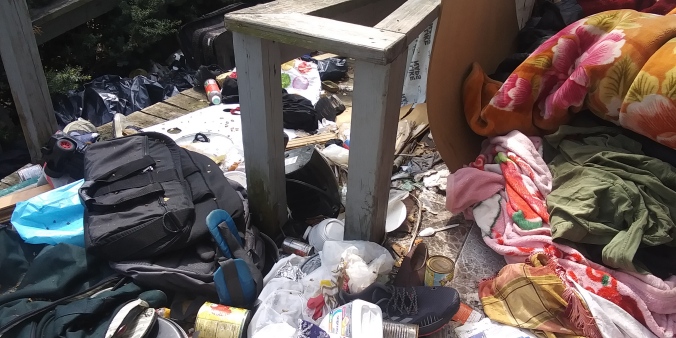 There were no signs of life around this makeshift shelter, although there was evidence of recent inhabitants occupying this despairing disaster area, like this tin of food and a fresh pile of human dung by the steps. 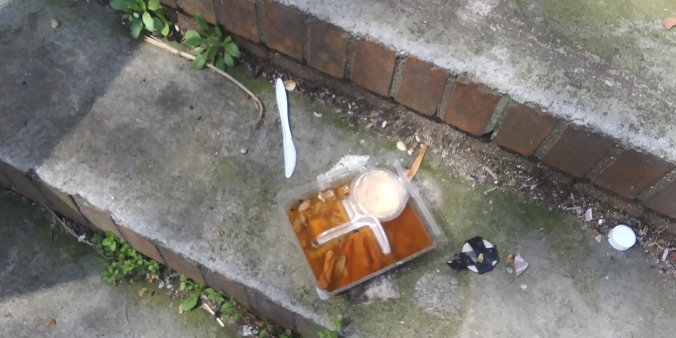 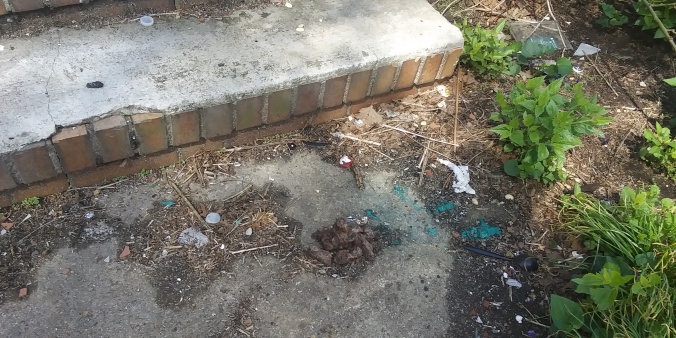 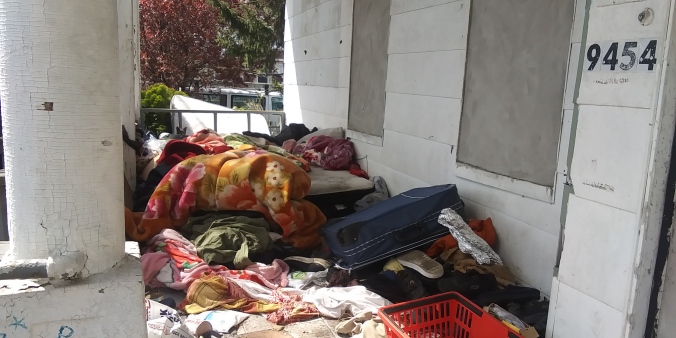 Except for this stray black cat that was eerily giving me the stink eye. 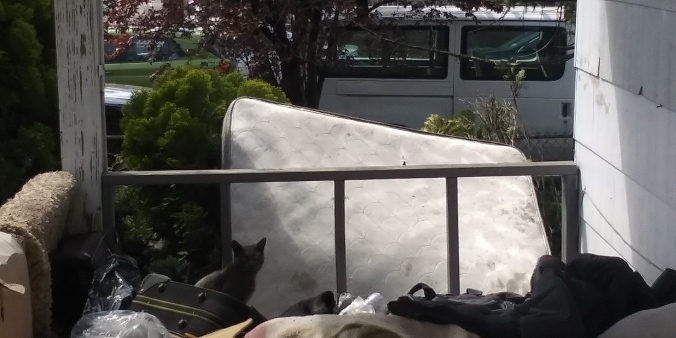 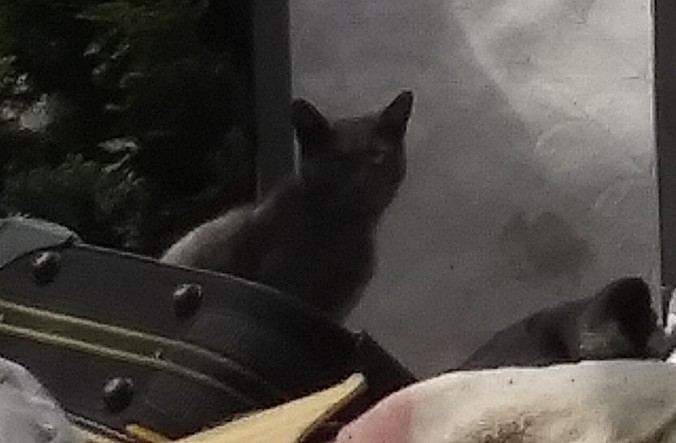 Interesting how there is no encampment set up in the spacious backyard, And it’s hard to tell if there’s any sign of a break in. Which would make sense if a criminal element would want a place to hide 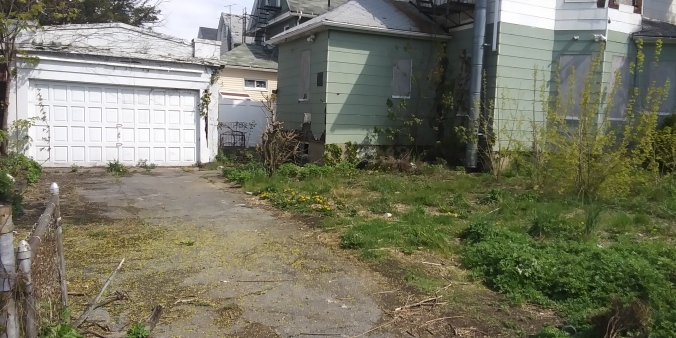 Although with the way this mattress is placed outside on the porch, it looks like it was thrown there following an inspection or maybe the recent NYPD raid to search for the hate crime suspects. 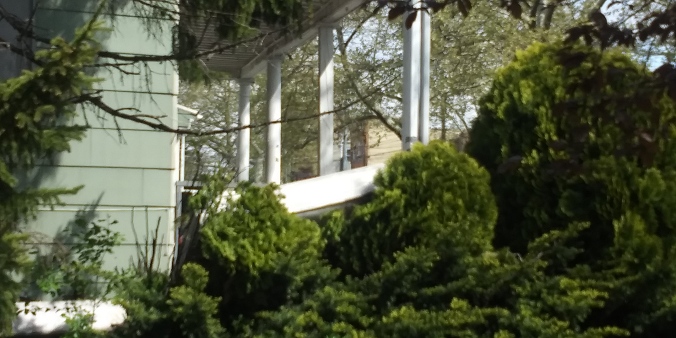 And there have been inspections of this house from what this water damaged ticket on the fence displays. 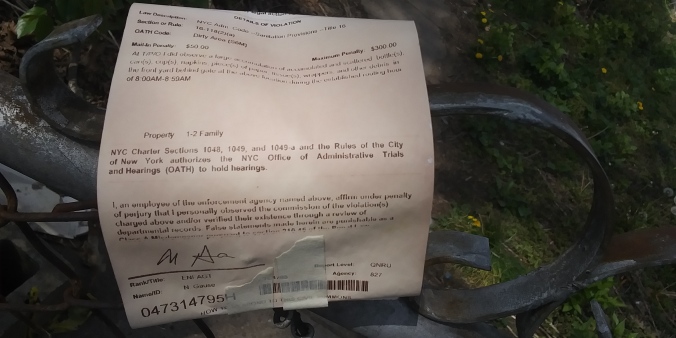 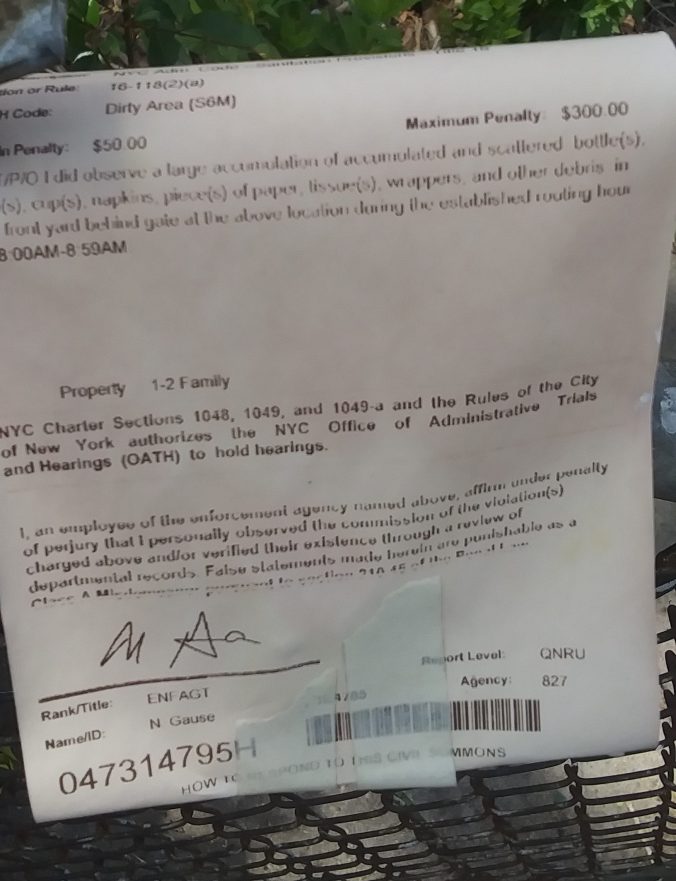 The city was also benevolent enough to give the owner of this horror house three months to pay for it or to fight it in court. Given that this property got even worse the past year and is now a safe but repulsive haven for recidivist and budding criminals as much as it is for desperate homeless people, surely PSM MGMT are quite intimidated by such an arbitrary demand by our bureaucratic authorities. 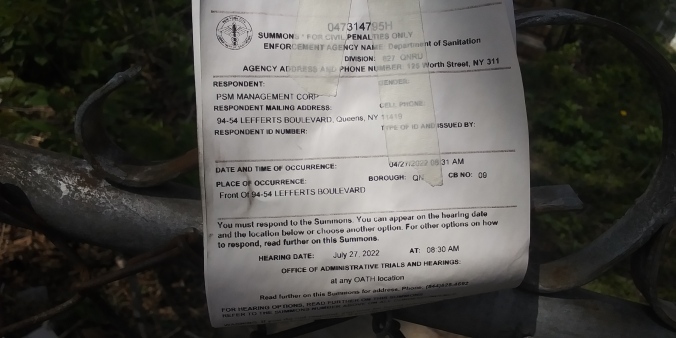 Although the D.O.B. actually did try to put the owner of this property on notice for enabling squatting on his porch but apparently it was easily removed. Which is kind of sad given they waited about eight months to go back there to tape one up. 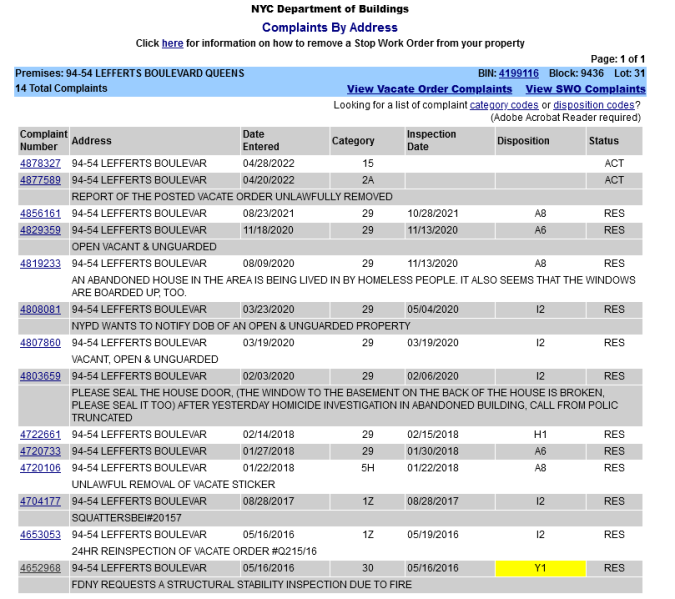 For all the talk about how “public safety is the prerequisite for prosperity” Mayor Adams has been doing nothing but drone sloganeering and talking points to get stuff done to bring down crime on the streets and in this case hold recidivist derelict property owners accountable as well, just like his abominable asshole predecessor de Blasio. Nobody is going to prosper with violent sociopaths roaming around and hiding in the shadows waiting to prey on the citizenry and the New Bad Days in New York City will continue to sow fear and ultimately more injury, physically and financially.

Another Sikh got attacked and Richmond Hill. It is a case off robbery at gunpoint. pic.twitter.com/FVlhzZQ6m2

A 63-year-old Sikh man said he was attacked by a man brandishing a gun and demanding money on Mother’s Day morning. It is the latest in a recent string of incidents of Sikh residents being attacked in the same neighborhood.

Kuldip Singh fought off his attacker. He had bruises and bandages to show he put up a strong fight.

It was Sunday around 10:30 in the morning when Singh was out for a walk. He told PIX11 News that, seemingly out of nowhere, a guy approached him on a bike, showed a gun and tried to rob him.

Singh grabbed the suspect’s arm, and both fell to the ground. That’s when police said Singh was pistol whipped. He suffered bruises and lacerations to the head, a broken nose and fractures in his right hand. The suspect was unable to get anything from him and ran off.

Harpreet Toor, with the Sikh Cultural Society, is an advocate for the community.

“Honestly, I’m happy he fought back instead of just handing over the money,” said Toor. “I know it is dangerous, but you have to draw a line somewhere.”

Since early April, there have been at least three other attacks against Sikh residents in South Richmond Hill.

This isn’t going to stop whether or not that house is being illegally occupied or not, but it’s squalid existence is an integral factor of why these attacks are continuing and will continue. Day or night.

This house needs to be torn down. Stat.