This year’s Superbowl was very noteworthy. The Philadelphia Eagles managed to beat the New England Patriots with a phenomenal performance by the best back-up quarterback in the NFL Nick Foles and thwarting another Tom Brady 4th quarter resurgence with a timely strip-sack. But leaving a bigger impact was the a major blight during the middle of the game with an ad by auto manufacturer Chrysler for their resilient Ram trucks with their usage of an audio clip from a speech given by Dr. Martin Luther King Jr. given in the last year of his life and 2 months before his assassination.

According to insipid marketing team behind this cultural appropriation and butchering of a speech that was and still is a rebuke of showing off your wealth, how it defines status and frivolous ignorant spending beyond one’s means, and rails against the pervasive influence of vehicle advertisements. Rev. King and his followers could have reached the mountaintop faster if they had a Ram tough motor vehicle.

This has gotten universally deserved condemnation. Although the seeds for this type of parsing of messages for social justice and even aggression was planted with the notorious ads for Nike when they used and abused the Beatles’ “Revolution” and Iggy And The Stooges “Search And Destroy” to hawk their products as instruments and accessories of faux protest.

And as for how the men and woman behind this ad would think it was a stellar idea and not at all blissfully ignorant of it’s true meaning and message and actually thought it would invoke inspiration for their and a new target demo, without a microbe of shame about it, this shit was prophesized by two animated T.V. shows. Most amazingly by the Boondocks in it’s greatest episode that hypothesized what would have happened if Martin survived the shooting and awoken from a coma in 2000, he went to an Apple store and a fast food restaurant that had his image displayed on the wall and a food tray mat and frustratingly said “I should have approvals over this kind of thing.” 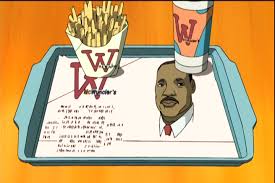 To fix this abomination, a video surfaced to put the proper context of King’s speech and the lousy commercial in place. And maybe keep the Reverend from continuing to spin in his grave.

As for the truck tie-in and ironic precedence, the Simpsons did it in the episode where Krusty The Clown revived his stand-up career doing material with sharp criticisms against commercials and corporations like a grease paint wearing Bill Hicks, gets approached by two casual Friday dressed ad guys and offers Krusty an endorsement contract to peddle their, get this, SUV truck called Canyonero. The next scene, Krusty’s on stage talking about his meeting to the crowd and then starts shilling the trucks attributes and mileage and the two douche bags he sold out to.

Too make a little bit of sense of all this and the modern day shitting on MLK’s grave and legacy by this generation of cartoonish greedy amoebas, Martin Luther King has been Canyoneroed.

As for the Giants, who were ironically picked for playoff contention for the big game and ended the year at 3-13 with the firings of the coach and his staff and the general manager, their two star players found time during the post-season to humiliate themselves further by doing an homage to Dirty Dancing. As Patrick Swayze’s memory gets awkwardly danced over.

The commercial’s ending got a big laugh. Not me though, but by everyone that counts. This nauseating minute did have some interesting aspects though. That O’D.B. has recovered nicely from his injury and Eli shows some deft stamina and strength lifting his receiver up like Jennifer Grey despite rumors of it being the result of some CGI tampering.

However, though Eli gets the moves right, he still looks lumbering and stiff making those moves, similar to how immobile he was in the pocket during the majority of his pass plays last season. And the part where the O line joins him for the goofy group dance clearly shows their collective lack of chemistry, coordination and immobility that allowed defenses to crush them every week, preventing them from moving the chains and cracking 20 points.

I don’t know when this was filmed, but I assume it had to be during the playoffs. I thought when the Giants hired Dave Gettlemen that shit was going to get serious. But it’s apparent the team is continuing their degradation and humiliation by agreeing to this lame ad. They should know better. Especially Eli, who really isn’t much of a personality to pull this or any kind of parody off, and O’Dell who continues to act and look like a dork (get rid of that stupid muffin hair already) with total oblivion.

It’s going to take a lot to get their dignity back. But at least they just play football. Those dipshits who made that RAM ad don’t have or even care to have a shred of it.