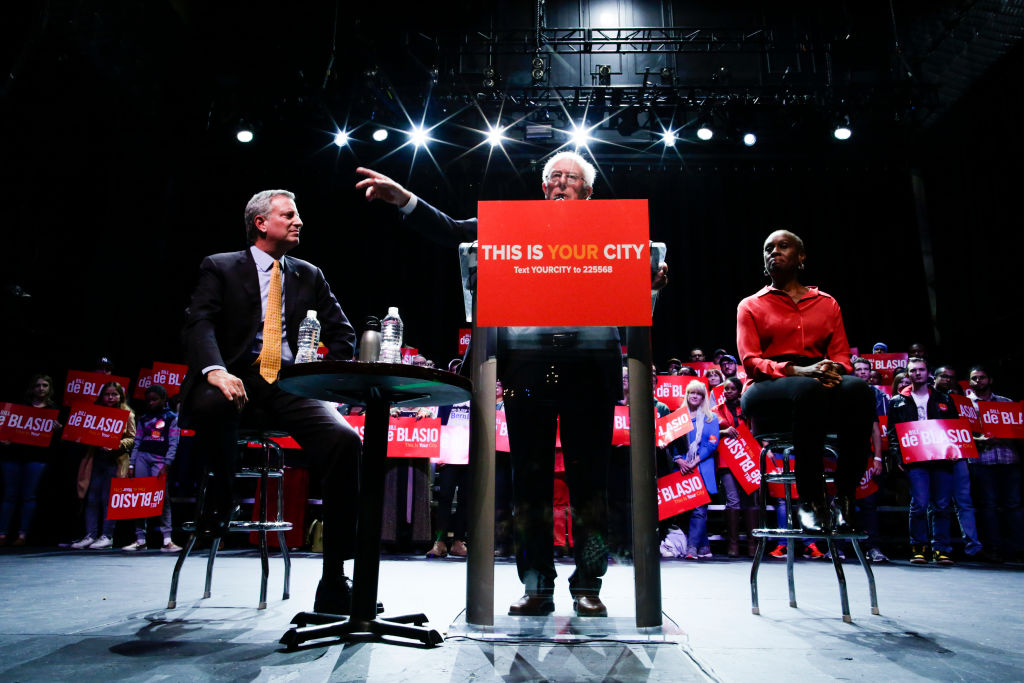 This is also fucking obscene. Bernie Sanders here enabling a fraud and hustler.

Sen. Sanders should definitely know better, especially the way his campaign was undermined by his new pal which makes this trip to prop up this dotard mayor remarkable. Recall that during the primary swing in New York, de Faustio was straddling the fence, one of his many habitual straddles that continues to this day if his most recent thoughts on the Columbus statue should indicate, about who to endorse for President. That choice ultimately went to Hillary Clinton in a style that uncannily resembled his monetary dealings with his booby Jona Rechnitz for the federal witness’s demand for civil services.

Instead, he went on an electioneering and photo op tour with the blighted mayor on the worst fucking transit system in the universe and waited for the A train for 10 minutes to show (Cuomo “Christie” style slowdown??). Bernie offered some slight anecdotes about paying with tokens and griped about the ultra-wealthy do not pay their fair share and touted State Senator Gianaris proposal poached by de Faustio to tax millionaires to fund the subway instead of relying on Gov. Andy’s plan to use congestion pricing in a quite nauseating reiteration of the mayor’s talking points. Fucking remarkable.

Then it was on to rock and club venue Terminal 5, where I saw the phenomenal band Helmet over 20 years ago, for a campaign rally to rise up the crowd and the audience to vote and vote big for the working poor and middle class betraying incumbent mayor, probably to give the mayor some credibility with a higher turnout at the polls.

Bernie, he of the independent streak and consistent vocal opponent of money in politics, should have came here to kick someone’s ass at the Board of Elections that’s under the purview of the mayor he has embraced. For it was revealed 5 days before Bernie touched down here that that government office broke the motherfucking law by purging 200,000 votes off the rolls. 117,000 in Brooklyn alone during the 2016 primary, which in all probability cost Sanders his home borough and the entire state of his chance to bring reform inherent corruption in government and implement progressive and fair policies to the nation.

It also has been revealed in a not at all shocking admission from former DNC chairperson Donna Brazile that “Manifest” Hillary Clinton took full control of the committee’s finances and operations so she can solidify her candidacy.

Why Sanders would come back to the city to do what basically is a optics mission for a party who criminally undermined him to bolster someone who didn’t support him for president is perplexing to say the least.

Hell, Sanders should have blown off de Faustio’s electioneering subway tour altogether when on the same day in the papers his campaign manager and confirmed agent of the city Ross Offinger was exposed to have gifted a free Carribean resort vacation stay by federal witness Jona Rechnitz for their pay to play machinations.

Did Sanders even read what de Faustio viciously, condescendingly said and kept lying to reporters during his press conference in Rockaway Beach, that his constituents couldn’t care less what they were asking about his relationship and honest grafting with his bubby Jona? Maybe it would have compelled him to search for the campaign office of Sal Albanese and give him the Sanders Bump.

It’s like Bernie, by direction of the betraying DNC, didn’t even bother to even read a couple of newspapers when he showed up.

Not only is this perplexing, but preposterous and ultimately disappointing. And dismaying.

Bernie capped off his speech at the rally by repeating de Faustio’s dishonest refrain of a vote against him is a vote for Trump and his policies. But the mayor is not running against Trump. His opponents are Republican Nicole Malliotakis, Independent Bo Dietl, and Reform Party candidate Sal Albanese. You’d think Bernie would be cognizant of these words effect being that Hillary and the Democrat Machine basically blamed his campaign run for ruining HER chance at President.

So this is what the five boroughs have to tolerate now and have to settle with. With this push into a second term for de Faustio. But in politics these days, the corruption by those elected and assigned and the cynicism of the masses is so entrenched in government and society under the Irrelevant President, that, according to the Democrat Machine, there is no other way to get services running (somewhat) efficiently for the constituents. It’s another version of the too big to fail system that was applied to the demonic banking industry (which still hasn’t learned anything and has been emboldened). Even the most popular progressive politician in the country cannot surmount this.

“It is what it is” is what a lot people say. This, is normal now…