In Midtown East by Grand Central Station, a homeless man was stabbed twice in the chest and bled to death on the street after an altercation with legendary rap pioneer Nathanial Glover, widely known in music history as M.C. Kidd Creole of Grandmaster Flash & The Furious Five for their groundbreaking hits The Message, White Lines, Freedom, And New York New York. He is being charged with murder in the incident, reportedly motivated by an perceived and unwanted homosexual advancement, but all the victim allegedly did was greet him with a “what’s up”, and fleeing the scene of the crime and ditching his knife.

Kidd Creole was working as a security guard and maintenance man for an office building around 44th street and living in an SRO in the Bronx where he was detained by police, the borough where hip hop was created and a few blocks away where he started composing rhymes and rocking parties in the 70’s. His victim, John Jolly, is a mentally ill homeless man who once served time on a rape conviction. Both men were respected by their peers. Both men’s lives are turned upside down because of one bad moment on the streets of N.Y.

This is massive tragic outcome for an artist who was part of the last great cultural renaissance in NYC in the rap genre which also involved punk and disco music, art, films and theater (the recently passed Sam Shepard comes to mind in this category). The sad state of his condition and status must have had a deleterious effect on his psyche to react so violently to a man just greeting him. Literally fleshing out the chorus of his song “The Message”.

Don’t push me cause I’m close to the edge, I’m trying not to lose my head

The song also shows that it is still relevant today, even though the urban blight and poverty is blanketed by the shadows of all the new towers that have been built over the past decade and glossed over by the bogus sheen of theme park style vibrancy. Which only sort of rationalizes Nathaniel’s need to possess a steak knife for protection. But “The Message” is slightly trumped by the prophecy of the chorus of their follow up single “New York New York”.

Too much, too many people, too much

This is the first time that a rapper’s songs became reality since the time when Slick Rick got involved in a shooting and a police car chase, resembling his hit “Children’s Story”. And the first time a rapper stabbed another man in public since Jay-Z. Rick served his time and still had a decent career afterwards and Jay Z, well he’s an icon, a billionaire I think, and married to Beyonce Knowles. Nathanial at this late stage will not be so fortunate. He will always have his legend, but his life is shattered after trying to cope with his comedown from fame and fortune and the overwhelming stress of the ubiquitous high economic costs of living in this city. As are hundreds thousands of others languishing in the same situation, like the murder victim who probably would have been safer at a hospital getting treated than languishing in a shelter and roaming the streets, if there were a fraction of the amount of hospitals as there are shelters or hotel/motel rooms.

Too much, too many people, too much.

In Times Square, where Disney characters and naked painted ladies have supplanted the pimps and whores of the 70’s and 80’s with their daily hustling of tourists amidst police indifference, a tourist from Utah assaulted and hospitalized a Long Island man with a suckerpunch and kicks.

Also in Times Square at the DoubleTree hotel, a girl was molested by a man with prior lewdness charges against him, as he rubbed his genitals up her back side while her family was not looking.

In Greenwich Village, 2 people were attacked and slashed in the face by the same gang of 4 men and a woman in consecutive robberies after midnight.

Also in Greenwich Village, a 74-year-old man coming home from a hospital was attacked from behind, beaten, stripped and robbed of $400 and credit cards in the vestibule after he entered his apartment.

At the Oculus inside the World Trade Center Downtown at noon, a man tried to commit suicide by jumping off a balcony 30 feet above the ground.

In Inwood, a dead body of woman who committed suicide was found in the Hudson River.

In Hell’s Kitchen, a woman robbed a man of $70,000 worth of baubles inside his luxury apartment after a one night stand.

In Yorkville, two taxi cabs collided into one another as one cab swerved and crashed into a restaurant, injuring 3 people including a 1-year-old boy.

Also in Yorkville, a woman was tricked by a man who offered to pay her cash for activating a citibike rode off and never returned it, leaving the responsibility and the costs of renting it to the victim.

Again in Yorkville, a man riding a bike snatched an iphone out of a woman’s hand and sped off.

On the Upper East Side, a couple of pricks tried to steal bikes by knocking down a street sign and clipping a chain off one in broad daylight.

In the Lower East Side, a luxury hotel recently opened directly across the street from a Section 8 program apartment building has seen a consistent spate of their patrons having sex in full view in front of their floor to ceiling windows to the annoyance and disgust of the residents of the real affordable housing building.

In Breezy Point, a woman in her 60’s was found dead floating in the ocean around 169th st.

In Long Island City, a man with a gun robbed a bank of 10 large.

In Sunnyside, a 10-year-old boy and a teenage girl acting as a lookout, attempted to steal teddy bears from a flower shop.

Also in Sunnyside on the 7 train, a shirtless blob of a man rubbed his genitals on a woman who happened to be an off-duty cop and ran out at the 40th street station.

In Astoria, a food delivery man was attacked by 3 men who placed him in a chokehold and robbed his cash and credit cards. The same group is suspected in 2 other recent muggings of food delivery workers in the past month.

At the Webster Houses in Claremont, a man was shot in the face and died later.

In Soundview, a cabdriver was accosted by a man who demanded the gold chain and medallion he was wearing, then shot him multiple times and another man who tried to intervene in the robbery.

On the 5 line between the East Tremont and Boston Rd. stations in West Farms, an 84-year-old man pulled out his penis and masturbated in full view of 3 children.

At a hotel in Melrose, federal agents busted a man possessing 40 pounds of Fentanyl, the substance used to dilute heroin and substitute painkillers for cheaper prices and maximize profits and to fulfill the high volume of addicts.

In Morris Heights, a heroin drug ring operated by millenials was busted inside an apartment building.

In Morris Park, a bus driver was assaulted by a commuter after he refused to give him a free ride after his route ended.

In Eltingville, a stupid fucking idiot was caught riding his motorcycle with a baby that wasn’t harnessed to him and without a license.

Also in Eltingville, a man overdosed twice in 12 hours in his car and at his home.

In South Shore, a man got caught stealing vacuum cleaners at a Target department store.

In Stapleton at 4:30 p.m., during a melee where a stabbing occurred, a man shot into a crowd of people on the street, wounding 3 people.

In Grasmere, a woman crossing the intersection got run over by a car and was dragged on the road as the driver sped away.

In Graniteville, a school counselor smacked around a child with epilepsy and tried to force him to stop crying.

In Coney Island, a massive brawl broke out by Luna Park around 11 p.m., lowlighted by 2 women beating the crap out of each other and a girl throwing a sucker punch and the injury of a female cop trying to stop the violence.

At a public school in Bed-Stuy who’s principal is Rudolph Giuliani’s cousin, a teacher smashed a 9-year-old girls face into a radiator.

In Sheepshead Bay, a man stabbed his neighbor to death after an argument stemming from the killer trying to seduce the victim’s wife.

In Greenpoint, a laundromat was robbed of $1,500 in coins and bills by a man who broke into and robbed a restaurant earlier.

In East Flatbush, a man acting erratically was shot down by police after he attacked them with a knife as they entered his mother’s apartment answering a 911 call.

In East New York, a man crossing the street was plowed by a driver in a Mercedes Benz who drove away and left him critically injured on the road.

At a homeless shelter in Bushwick run by the “Economic Development Men’s Shelter” (say that without chuckling and cringing at the same time), a bloody fight between two men led to one of them getting his finger bitten off and the other with head injuries after the fingerless man pummeled him.

Also in Bushwick, a woman uber driver was being harassed and stalked by a chronic public masturbator repeatedly tried in vain to inform the NYPD of him, only to be told it was a waste of time and blown off repeatedly over technicalities related to the decriminalizing of certain laws which suddenly include persistent public lewdness, and the lack of photos of the deviant offender which suddenly include persistent public lewdness. 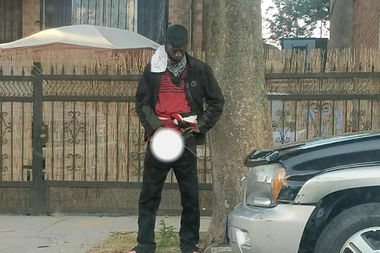 When she got a picture of him, she was told she wasting her time and they need to be present when he’s making flippy floppy with his little trouser snake. The next day after public outcry and other citizens familiar with the jerkoff and the reporting of Gwynne Hogan of DNAinfo, the cops arrested the wanker by his home on a knife possession charge.

No such trepidation by the NYPD in Crown Heights a few days before this denial of civic service, when a uber vehicle was flagged down by a patrol car whose passenger was suspected in a robbery for almost matching the description of the color shirt he was wearing. During the stop and frisk (apparently this is still going on), 2 plainclothes officers got aggressive and one of them pull his hair and punched the accused man in the face.

After a chaotic street scene with concerned relatives of his, one of them a corrections officer, they put him in the car, drove him down the block then released him with a disorderly conduct charge. Fortunately for him, the new decriminalization laws, even for this bullshit charge, kept him from going to Rikers.

It’s like a jungle sometimes, it makes me wonder how I keep from going under.