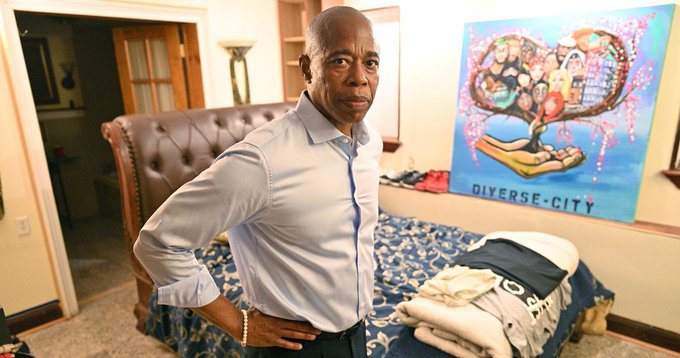 Election day finally came to unseat the pile of shit current mayor and bag of dead dicks and human shit Bill de Blasio and his long awaited removal from City Hall, and the chosen one by New York’s registered voters was Eric Adams, New York City Cop, State Senator and current president of the borough of Brooklyn who beat street tough vigilante and civic obsessed shock jock Curtis Sliwa, trouncing him by over 40 percentage points of the votes.

Actually in this case here, accuracy is required, he won with 39 percentage points over the bereted one and with the horrendous low voter turnout, Adams can hardly be deified as chosen, even though he basically called himself that by preemptively repeatedly decreeing himself as NYC’s mayor immediately after he won by the skin of his teeth in the Democrat primary in June, beating de Blasio’s commissioner Kathryn Garcia by a cunt’s hair in the stupid ranked choice voting tallies and overcoming the early challenge of the now forgotten startup millionaire tech bro Andrew Yang. He even defiantly exhorted he was the Mayor right in front of The Blaz’s big dumb goon face at a rally with local city official elites back in July. Adams was also buoyed for 5 months being reported as the predetermined Mayor-elect by a recalcitrant news media that constantly described him in stories and headlines as the “likely” and “certain to be” mayor in a “democrat majority city”

But Adams triumph is dubious to say the most despite his landslide win. He won with only a little over 800,000 votes registered in the primary and with a little less than 1,000,000 votes registered for his early win on Tuesday, 969,600 to be precise. So Adams does not have much of a mandate or even one at all (considering how Sliwa trounced him in Staten Island). Adams actually won the mayor’s position with less the amount of votes that the Blaz got, even in his re-election in 2017 when he just got unindicted for pay to play crimes he committed in City Hall. Both times the Blaz won with only about 11% of city voters who bothered to show up, Adams apparently only won with about 9% this time around. Have to say that just like with de Blasio, the 4 million who stayed away again on Election Day did more to help Adams than hurt him.

But mostly it’s all that consent manufactured by the news media apparatus that played a factor, since de Blasio’s toxic endorsement didn’t ruin Adams campaign nor did the new Mayor’s Westworld performance at the debates where Sliwa ate his lunch mattered much either. Even an expose’ about Adams shady residential tax filings for his townhouse in Bed-Stuy-which were made by an accountant who wound up homeless after getting indicted for embezzling funds from an apartment building he was running in Harlem-didn’t revive voter apathy or lead to much coverage from the press that already wrote subtleties about his preemptive win of the election.

A super majority of people didn’t want to bother because they were told Adams victory was already solidified (a good way to normalized vote tampering) or they were already determined to fill the oval for him, which was the case of the primary as he swept up the  still dominant middle class voters of the forgotten enclaves of the outer limits of Queens, Bronx and Brooklyn and over the river in Staten Island.

But there is an overarching theme here for the massive absence of the constituency of the five boroughs and that’s the hilarious not-so urban legend of Eric Adams residency of the town he’s going to helm on New Years Day. Heading up to the final days of the primary late Spring, rumors started to get validated about Adams own massive absence from his residence in Bed-Stuy, Brooklyn. Which got so heated that he actually invited the press to come see it themselves for confirmation in what was the weirdest episode of MTV’s Cribs that never aired (Adams actually made a case for the show’s revival) and also a hilarious video Curtis Sliwa produced of him going to New Jersey to the co-op Adams co-owns with his lady friend.

Adams Bed-Stuy “residence” became even a bigger curiosity when a reporter from City Limits stopped by and found the basement door loaded with mail and violation notices from the Department of Buildings. Which can wholly explain why Adams decided to crash at in his office in Borough Hall in Downtown Brooklyn for the past year and a half. Despite his claims that he wanted to be available during the pandemic, it’s clear that he was squatting there all the time to evade visits by the Department of Buildings and probably his desperately troubled accountant.

As jokes about Adams alleged presence in the borough he runs continued to thrive on social media, yours truly even moseyed by there to see if the Chosen Mayor would materialize. 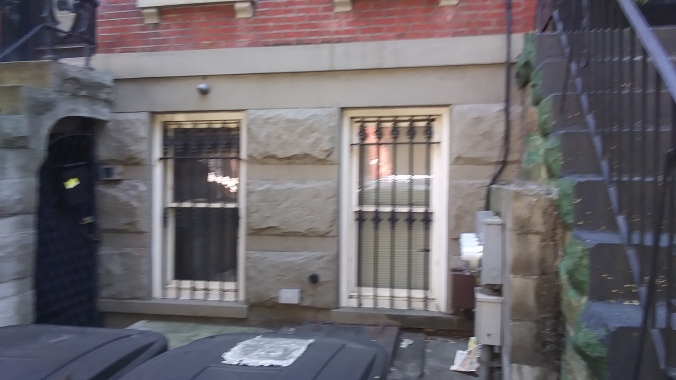 No luck and no Adams. Although there was a yellow sheet affixed to the mail box to his basement entrance where he, um, lives. It sort of looked like a citation, but since there was an occupied vehicle idling in front of the house and I’m not a real reporter with credentials, I couldn’t really walk in and take a gander at it.

But a few real reporters with credentials from Curbed decided to play detective in the staked out his house for a week before the election. Apparently using his cop instincts, they caught Adams parking his car twice in the wee hours of the morning, first a block away in front of an auto shop where he blocked the driveway and another night on the sidewalk. Considering his eccentric behavior since winning the primary which included an overseas trip that he wouldn’t divulge to reporters of it’s location (it was Monoco. Why Monoco?), it seems showing up to his abode in the dark of night and minutes before sunrise should be considered normal for him. Even though it would be normal for say, Blacula.

But in the week of Election Day and after his official legitimate election win, the mayor elect has become man of the people and extremely accessible. Naturally to all the power brokers in the political Brooklyn Machine and the oligarch ruling class he mingled and networked with at a gala celebration party for him and even on the streets of New York where he got embraced with adulation by his elected Democrat allies and the citizenry who hired him to lead the city out of it’s current struggle to recovery.

Oh wait. How can anyone forget,  there’s The Blaz’s fascist vaccine extortion mandate for all municipal workers that Mayor-elect Adams is going to inherit two months from now but like his certain victory got the mandate preemptively as well as hundreds of suspended city workers ambushed him coming out of Borough Hall and literally put Adams into a corner with demands to be re-enfranchised of their jobs.

Chaos Erupts when Eric Adams comes out of his office. Protesters against mandates confront and yell at him because of the mandates #BreakingNews #NYC #MANDATE pic.twitter.com/46slZjie8y

Usually with mobs and aggression like this against an elected official, being the current Brooklyn BP and also a cop, it would be immediately followed with NYPD overdeployment and over aggression to ward off the crowd (like kettling) and mass arrests, but Eric Adams willfully stood with them and requested to have a quorum with the organizers of the contentious public assembly inside his conference room to discuss the mandate. Showing that in just a few hours with the public, Adams accomplished a connection with his constituents than what The Blaz did in his 7 years  and 10 months of his abominable existence in city hall.

This actually gives the optics of hope in a truly hands on street ready mayor of the people and an actual face of the democrat party (Adams words) that the people can see and feel (at least for now). Pretty good but also antithetical for a guy who has been vague and evasive for over a year now. It’s going to be interesting to see if this display of accountability will continue, or its just more but better optics.

Be seeing you Mr. Mayor…