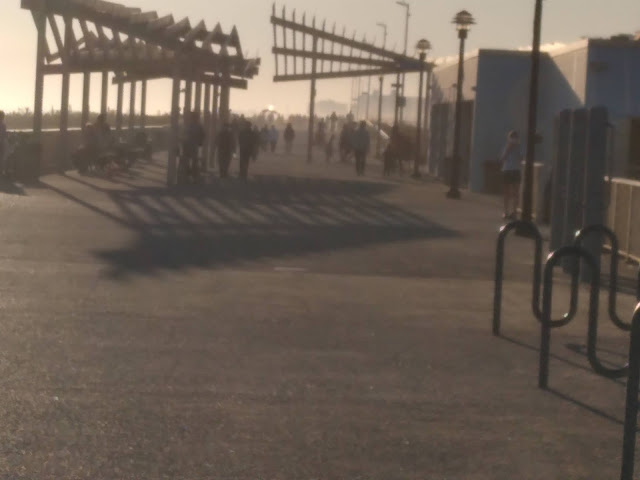 A decision to award a 15-year Rockaway Beach Boardwalk concession contract to a new company could result in the eviction of a handful of beloved boardwalk businesses, say worried beachgoers and eatery owners.

The New York City Parks Department has contracted with Rockaway Beach Bazaar LLC, a company formed by the owners of Brooklyn Bazaar and nearby Riis Park Beach Bazaar, to renovate, operate and maintain three beachfront cafes, one shop and 20 additional units for the next decade and a half. The properties include the popular bars and restaurants Rippers, Low Tide and Caracas.

The LLC outbid Rockaway Beach Club, a coalition of local business owners that won the contract to operate concessions at Beach 106th, Beach 97th and Beach 86th Street in 2011. The Rockaway Times first reported on the contract.

The longtime tenants and many of their customers say they worry the new operator will evict the eateries or raise rents.

The store is located on Beach 91st Street, about two blocks from the boardwalk, and opens occasional pop-up shops outside Rippers. “It’s because of them that so many of us have had the times of our lives on the Rockaway Boardwalk,” Zingara said.

Zingara’s post also described a concern among many boardwalk businesses: even those offered leases to remain in their beachfront buildings may lose control of bar sales, a crucial moneymaker.

“This would crush their business,” Zingara said. “And what about the dozen or so other small businesses that operate in the concessions ? Where will they go?”

The businesses in place have weathered COVID-19 and helped restore the boardwalk in the wake of Hurricane Sandy, said Rockaway resident Sarina Parachini, whose husband owns Rippers, located near Beach 86th Street.

“These are all Rockaway businesses owned by people from the Rockaways,” Parachini said. “We just got through COVID. We were on the boardwalk for Sandy, we rebuilt after Sandy in a huge way.”

As I documented here for a few years now this LLC, which has had almost as many name changes as Eric Prince’s war mercenary corporation Blackwater to adapt to the times and also to cover for their past failures from their own bottom line decisions, got tasked by NYC Parks and National Parks Service to “revitalize” Riis Park with their annual summer event of upscale foodie and leisure lifestyle culture consumerism. And as I observed and reported, while it did much to rejunivate the boardwalk with new concessions which included the restoration of the Riis Park Bathhouse, there was absolutely no improvements to infrastructure or even basic environmental maintenance like a sufficient amount of garbage cans or even intermittent collection of trash which piled up like sand dunes at the end of the night.

And after all that prospective allure the concept of the Riis Bazaar LLC conveyed, many areas and public amenities remained in ruins during their time here.

The only revitalization that occurred in Riis Park only happened where the Bazaar’s concessions were set up and it was never more pronounced than this year of the pandemic. While every other outdoor event was cancelled as New York was still on full lockdown, the Riis Park Beach Bazaar still went on as scheduled (even as restaurants on the Rockaway Beach boardwalk weren’t allowed to open yet). When the lockdown  was finally rescinded, the tale of two beaches continued on the Riis boardwalk, as the boardwalk by the Bazaar was filled with tables yet the popular grilling area was devoid of them except by the gondolas and all the grills were removed because of the peculiar arbitrary ban of outdoor grilling from social distancing guidelines.

Even though the pandemic did have a devastating effect on the Riis Bazaar, Gateway NPS decided not to renew their lease, which should be a validation their failure for their attempt to revitalize the beach when it didn’t even need revitalization because people always came here (just not the people who spend frivolously enough).

Although Mayor de Blasio and some morons at the NYC Parks Dept. clearly refuse to see it that way. They have so much confidence in the former Riis Bazaar that they gave them this lengthy contract during the Christmas holiday while no one was paying attention and not many was Zooming in to see the hearing. Except the people that are worried about being supplanted, the people and businesses that make up the Rockaway Group LLC.

Of course the city’s and  Rockaway Bazaar LLC’s s rationale behind this sneaky deal is yet again, “revitalization”. Which is immensely laughable because  the fact that Rockaway is actually a more popular locale than it’s ever been. Even during this COVID summer, citizens still showed up en masse even with a drop off of tourists, which is probably where they are deriving their “revitalizing” theory from. What’s ironic is that these concessions and businesses that the Bazaar LLC are the same kind they were pushing for five years at Riis. Although the distinction between the Group LLC and the Bazaar LLC is that they have been plying their business and lives locally while the Bazaar LLC are straight outta Brooklyn and have been pushing that brand in their entire existence and wound up gentrifying themselves out of there and Riis, justifying the Rockaway Group LLC’s how reckless they are with finances and shouldn’t be trusted at all with the city’s largesse for 15 years.

While their treatment of employees of the Bazaar LLC is news to me (though not surprising), they do seem to have a ruthless bent. Shortly before it was announced their presence at Riis was final, their high end nook “The Dropout” posted photos of trash left behind in the grill area from a party the night before, one of them clearly from the front passenger seat of a car.

After this was dispensed on social media (and while the Dropout was closed permanently that day) and even though  visitations to the grill area and gatherings were permitted (and there will still a stunning lack of disposal cans) suddenly Gateway Park enacted new rules for the entire beach at Riis and a ludicrous new closing time at 9 p.m. and the still popular grilling area to be closed at 8 p.m.

And the NPS weren’t fucking around either. The park rangers and police were combing the boardwalk and park space right after the sun went down. Leaving Riis Park, a perennial party place, a veritable ghost town.

Now because of their complaint and the spanking new effort to keep the beach clean (and devoid of visitors), the picnic area closes at 8pm and the entire beach closes at 9 per the new rules.

And the park police are serious about it. pic.twitter.com/OUn95AN0ST

Apparently, the Riis Park Bazaar and notably the Dropout must have been seething with envy that genuine vibrancy was going to go on without them, so in their sudden environmental concern about pollution of the beach of which they also continued to contribute too this year, they weaponized it against the people who weren’t their patrons.

So it’s easy to see why this is such a tremendously shitty deal that had to be done with dirty conniving tactics. The Rockaway Group LLC’s are right in their demand for this to be stopped also because it sure looks like tweeding was involved and the ludicrous longevity of this 15-year contract to the Riis cum Rockaway Bazaar has the potential to make privatization of the boardwalk a reality because while Riis Park was still a shambles when they were occupying it, the Rockaway Boardwalk is already set up for them because of the stunning repair and modernization and resiliency modifications of the beach with the sand walls and the long overdue and current placement of groins that are happening right now.

Basically, the Rockaway Beach Bazaar will have to try really hard to fuck up the hook up gifted to them from our elected and appointed officials. But if their record at Riis shows, they probably will and will sadly take down local businesses with them at the worst time right now for them despite the kind words coming from their claims and future press releases.

Making the full on gentrification of Rockaway Beach not hard to reach.