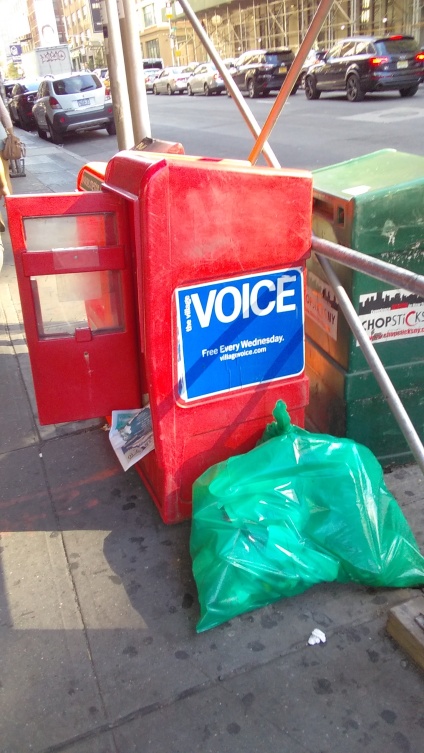 I first bought the Voice at my local newsstand in 1987 and it opened up a new world and instilled in me a new awareness. The articles of Wayne Barrett and his coverage of civics and city hall at the end of Koch and during the overrated reign of Giuliani, especially with the actions and immorality of our current mayor and Nat Hentoff on his weekly first amendment lessons and with what’s going with the attention these statues and this idiotic panel said mayor has assembled, still rings with relevance today. I also enjoyed the movie and music reviews and the early comics of Matt Groening’s Life In Hell, which made looking forward to The Simpsons back in ’89 a thrilling moment, and the photos of Slyvia Plachy. It is also where I got my first job working in Manhattan and where I developed my taste in music, art and film from the back pages of classified ads and concert announcements and club listings.

I thought when it went free in the 90’s, while convenient, was a mistake. And of course with the internet, it got smaller and smaller. Although it’s ending it’s paper edition, there was no doubt it’s demise was inevitable. I will make it a duty to link to their website, which is solid, but it’s possible that it even might not last because it’s joining one of a million digital news publications.

This is truly a tragedy, as the need and quest for information is becoming more unnecessarily arduous and popular culture is a rotted living dead corpse.