This came in the mail a short while ago and I was equally perturbed and repulsed. This newsletter is from the councilman of District 28, Ruben Wills, who is up for re-election. It was a 3 page fold out brochure of all of his purported concerns and photo-ops and it was the size of the NY Times.

During his brief term after being elected in 2010, he has been non-existent at council meetings and has used the majority of his term pilfering around $33,000 from public funds for bogus campaign and charity non-profits and filing false documents for his luxurious tastes in designer clothing, preferably Louis Vuitton, and fancy dinners.

A chunk of the money he stole went to some company, Micro-Targeting, that specializes in campaign literature and distribution, which immediately gave me the impression that this is how this waste of paper and ink conveying Wills fauxgressive propaganda got produced and mass mailed to his constituency.

For some ludicrous reason, he still has not resigned (nor has his official peers ask for him to step down) and has maintained his elected position despite being in the midst of his court procession. In fact, he has gone out of his way to avoid facing the judge’s sentencing by coming up with lame excuses to not even show up.

And this career hustler and hack wants to tout his dubious achievements and superficial concerns to persuade voters by filling up mailboxes with this shit.

Well, it looks like decisive and appropriate action had to be taken.

Fuck off, Ruben. Stop sending your shit to me and everyone else. Your absentee ass is not wanted here you fraud. Primary this chump, citizens.

Update: Another one hot off the press from the councilman 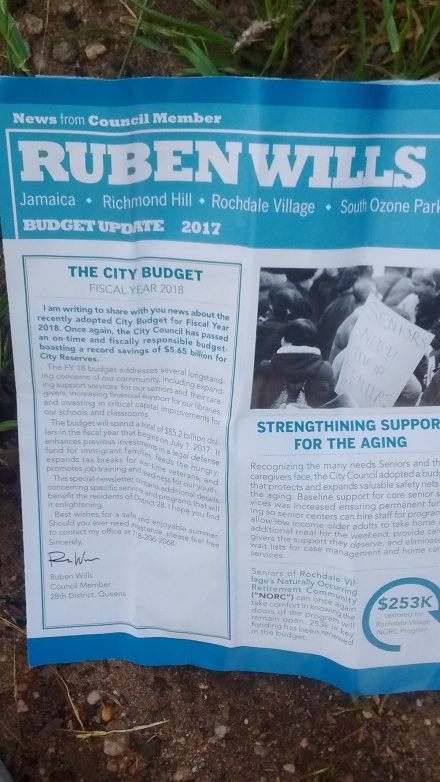 What the fuck did I just say about mailing this tripe? Despite the contents, which shows more funding going to strengthen the safety net, it doesn’t change the fact that Ruben was exploiting his position to enrich himself.

Well, it looks like there is a need for stronger symbolism. So I decided to dispose it in a place where the councilman would surely feel comfortable.

But I couldn’t find a pile of filthy money in a pig pen, but this receptacle might do the trick.

This damaged vegetation area is brought to you by Royal Waste. 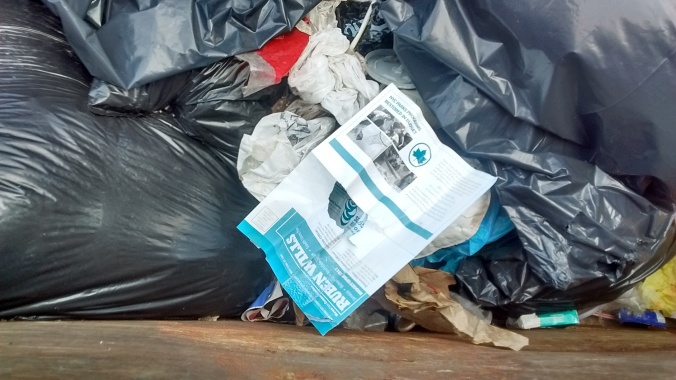 There, councilman. Now you are amongst friends.

2 thoughts on “I Received A Newsletter From Councilman Ruben Wills, Oh Boy.”